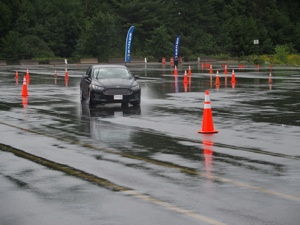 Non-stop rain negated any need for a water truck to wet the track during a recent ride and drive on Sailun tires. The standing water and slick conditions also made for a fun and informative test of the various tires’ abilities.

New England-based Sullivan Tire & Auto Service, in collaboration with Sailun and TBC Corp., hosted the ride and drive event for its employees and customers. Also in attendance at the mid-August event were trade media and representatives from Dynamic Tire Corp., Sailun’s Canadian distributor.

Sullivan Tire, which has exclusive rights to selling the Sailun brand in New England, decided to host the drive after participating in a similar one in Florida, said Brian Gollub, director of purchasing and distribution for the tire dealer. The company wanted to make sure its employees and customer’s understood the value of Sailun tires, he commented.

“I think people’s first impression is that you’re buying Chinese tires to sell them at a low price,” Gollub said. “We want them to understand that it’s more than just an inexpensive product brought in from offshore. Sailun has a great portfolio of sizes in different segments and the quality is good.”

Brian Mielko, vice president of sales for Dynamic Tire, said that Sailun views itself as a “value tier” brand because of what it can offer consumers.

“Am I going to sit here and say we are better than what you’re testing against today? No. Does it matter? No. The point is that for the average consumer, the Sailun brand offers a very strong value statement,” Mielko said prior to the actual test driving.

He acknowledged that some people would find the competitor’s tire to be better, some may enjoy the Sailun tire more and others wouldn’t notice any difference. “That gray area is where we thrive. When you see the price point, that’s when you really understand what the value proposition is,” he said.

Hosted at the Xfinity Center outside Boston, the ride and drive showcased both the Sailun Atrezzo Z4+ all-season tire and the Terramax CVR light truck/­SUV tire. Branding was removed from the sidewalls of the tires for a “blind” test of the Sailun tires against the Toyo Proxes 4+ and Pirelli Scorpion Verde.

Participants drove on two separate courses: one in the Ford Fusion and the other in a Ford Escape. Both courses put drivers through a series of maneuvers including a slalom, acceleration, braking and wet traction. Following the drive, participants were asked to rate the tires on various capabilities and the results were shared later.

Those who attended the event said they couldn’t tell much of a difference between the tires tested and said the price point of the Sailun tires and performance levels would make them recommend the tires to their customers.

While Sailun is still a little known brand in the U.S., the tiremaker has been around since 2002. The company sells nearly 30 million tires annually in 125 different countries worldwide. 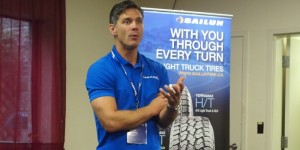 Mielko said the company is working on its branding in North America by targeting dealer personnel through ride and drive events.

“I could spend millions and millions of dollars talking to the consumers, but if someone walks in the door and the guy behind the counter says, ‘Nah, go for this one,’ then all my money has been wasted.

“The guy behind the counter needs to believe in me,” he said.

Dealers who want to learn more about Sailun’s products can visit gosailun.com.

Sailun is waiting to see the U.S. Department of Commerce’s decision on the USW’s antidumping and countervailing duty complaint against Chinese-made tires before it takes action on a possible response to any tariffs, the tiremaker told Tire Review.

“We’re not taking any actions, we’re just going to see what happens,” Miel­ko, said “Phase 1 of the official tariff will be announced in November, when we find that out we’ll understand how that impacts our business. The next step would be in January 2015, and then we’ll see how that part impacts our business.”

Sailun has three plants; two located in Qingdao and Shenyang, China, with the third in Vietnam.

Mielko did note that it would make sense to shift some North American production to its Vietnam plant if tariffs are instated.

“What can’t happen overnight is a massive shift. There’s not capacity outside of China to satisfy the market,” he said. “Product will still have to be made in China in the short term and in the long term we’ll see what happens.”