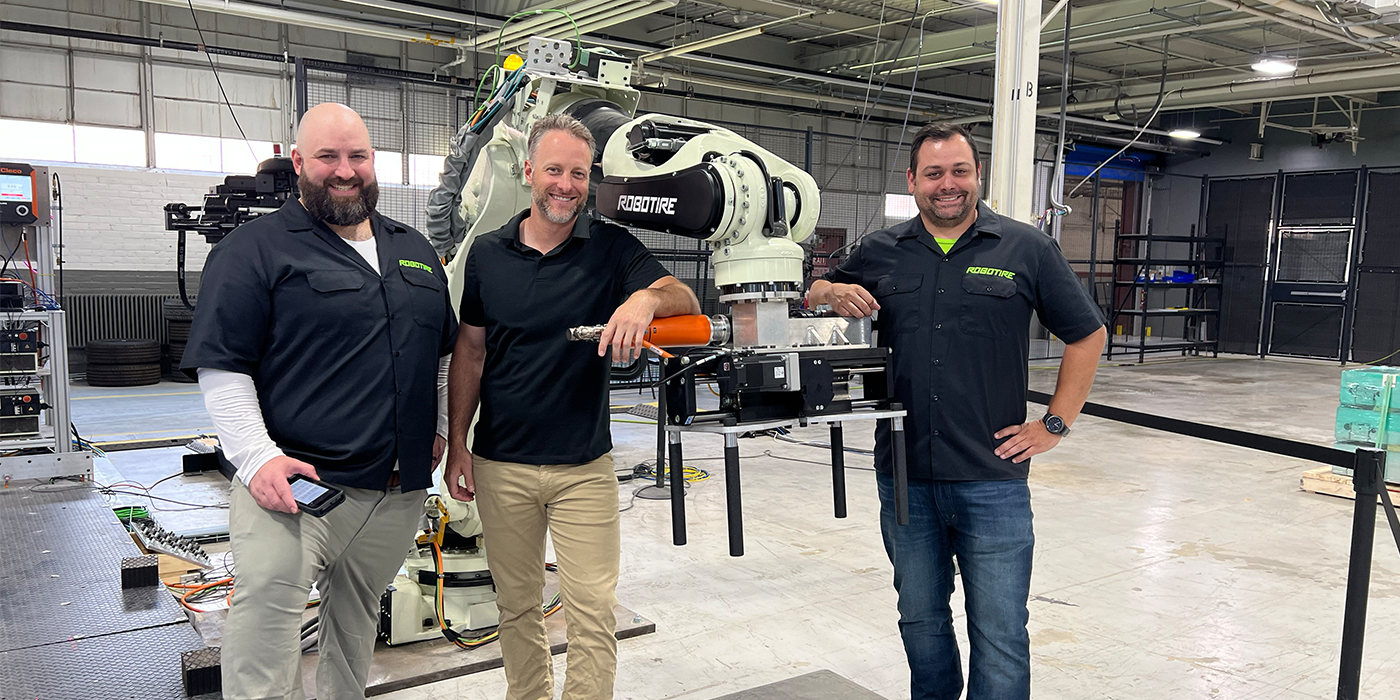 Tire-changing robots? Yeah, you heard that right. They’re here, and the company that’s bringing them to the tire industry is ready to revolutionize and elevate the role of the tire technician in your shop. Gone are the days of the “tire buster.” Now, we’re ushering in the era of the “RoboTech,” according to the team at RoboTire, whose tire-changing robots can change a set of four tires in less than 25 minutes.

About 60% of tire dealers report it’s “extremely difficult” to find certified and qualified technicians to fill roles at the shop, according to Tire Review shop operations data from August 2021. Even larger retailers like Discount Tire are feeling the pain– so much so that its parent company, Reinalt-Thomas Corporation, led a $7.5 million Series A investment round to back RoboTire’s technology and mission. Since then, the Detroit-based company exhibited at the 2021 SEMA Show and piqued the interest of tire dealers across North America.

“We have promising conversations that could lead to thousands of locations under contract in the future and have a path to installation with three major national retailers,” says Will Mapes, the company’s co-founder and COO.

In early August, the RoboTire team installed its first system at a Discount Tire location in Arizona. For customers like Discount Tire and others, the company’s system promises quick ROI for customers, a three-fold increase in productivity, as well as a solution to the technician shortage for shops.

When Victor Darolfi, then CEO of a Silicon Valley robotics company, walked into a tire store and waited three hours to get new tires on his wife’s car, he thought, “There has to be a better way,” says the now CEO and founder of RoboTire.

“We use robots in car factories to put tires on vehicles, so why aren’t we using them in an automotive service center?” Darolfi thought. That moment in 2018 was the formation of RoboTire.

From there, Darolfi, a mechanical engineer, spoke with every tire dealer he could find to discover their pain points –a shortage of technicians was the common thread. He then joined Y Combinator, an accelerator platform that has helped companies like Airbnb get off the ground. That’s where he met Mapes. With a background in Fintech, Mapes has been involved in designing software for the first versions of online car buying and other car dealership productivity programs.

“We were approaching the same problem of how can we get cars faster through the service center,” Mapes says. “I was putting the software into it and he was doing the robotics.”

When the first generation of RoboTire came to fruition, it looked similar to today’s version: the robot’s claw arm (like what you’d see in an arcade game) would remove the tire’s lug nuts, take off the tire and put a new tire mounted and balanced back on the vehicle, torquing lug nuts to manufacturer specs. Later, RoboTire formed a partnership with Hunter Engineering to integrate RoboTire technology with Hunter’s Revolution Tire Changer (with WalkAway technology) and Road Force Elite Wheel Balancer. During the process, they tested the technology out at a shop called Toole’s Garage in the Bay Area.

“We lived in the garage for almost six months working hand in hand with the shop to build the first generation of the system… We were learning proof of concept,” Darolfi says, adding RoboTire is now on its fourth-generation system.

During the pandemic, Darolfi and Mapes moved the company to a 100,000-square-foot warehouse outside of Detroit (they share a building with EV manufacturer Rivian), where they began talks with Discount Tire and started to hire staff. Last September, they hired Wilson, former COO for Virginia Tire & Auto, to be the senior manager of operations and bring in his experience with tire and auto repair shops.

When you walk into RoboTire’s HQ today, there’s a lot of empty space–that’s because the company is preparing to scale. “This will grow as RoboTire starts pumping more machines out of this facility,” Darolfi says, adding that the company soon plans to install one RoboTire system per week in a different shop by year’s end.

Luckily, they can control each aspect of their production, with different parts of their HQ allocated for manufacturing parts, R&D, testing and assembling the system. “That allows us to drastically turn around product quicker,” Darolfi adds. “We’re able to adapt to customer requests and changes very quickly.”

How exactly does a robot change a tire? What role does your staff play in it? You can see a video of how it works below or by clicking here, but there’s some important information to know about the system that didn’t make the video.

First, you might be wondering about how these robots get to a shop. Darolfi says assembly and set-up take place at RoboTire’s HQ to ensure the robots work and the system is programmed correctly. Then, the system is broken up into sections and shipped to the shop.

The shop has to meet certain power and air requirements to install it, but once it arrives, the robots are bolted into the floor, and set-up with the RoboTire team begins.

“It takes roughly two to three days for us to come in, get everything set up and get the robots activated,” Darolfi adds. “A few days after that, we train the employees…Roughly, it takes about a week for us to get the shop set up from start to finish.”

RoboTire developed its own training program, called “RoboTech” to train technicians. The curriculum delves into an overview of robotics, the function of each component of the system and how they work together.

“They walk away knowing more about robots than how to change tires,” Wilson says. “This makes it a really attractive entry-level position. With schools not investing in auto tech, you go to an operator that has this, and they’re willing to invest in your future, that’s a game changer.”

For tire dealers, an investment in technology like this is all about ROI. The RoboTire team doesn’t share pricing publicly but promises that shops will see ROI within a year and triple their productivity on tire installs in the meantime.

“It’s easy to look at a robot and think, ‘Oh my gosh, it’s so expensive,’” Wilson says. “But, when you factor everything in including the labor savings and the increased productivity, the whole equation paints a really good picture for the customer.”

Wilson says each quote is catered to a shop’s needs. When asked if the technology is suited for larger or smaller operations, he noted that what really matters is how a shop wants to grow.

“It is absolutely affordable for any size operator,” Wilson says. “We’ll talk to a customer and try to understand their business model, their inputs, how much they charge for installs, and we’ll really build a complete package for them so they understand how it will work with their business.”

He continued: “It’s really about what problems the shop is trying to solve. RoboTire may not be right for everybody, but if you’re experiencing challenges with staff, continue to have turnover, if safety is a big concern, if you want to grow your business, if you want to increase capacity and throughput 3X, RoboTire is the solution for it.”

When the RoboTire team dives into using robotics in other automotive services, they truly believe the possibilities are endless. In fact, shops have requested other equipment to “roboticize” so that it’s easier to use and can automate tasks.

The RoboTire team truly believes its tire-changing robots are the way of the future for innovative shops.

“Our target customers want to grow their business. They want to eliminate some of the challenges with the physicality of the job. And they want to make it easier for their current employees,” says Wilson. “We’re advocates for investing in your people, not replacing your people.”