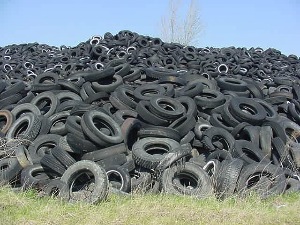 Twenty years ago, when the Rubber Manufacturers Association created its Scrap Tire Management Council (STMC), the U.S. was littered with more than one billion stockpiled scrap tires and only 11% of the annually generated scrap tires were sent to an end use market.

The STMC, which focused on developing end use markets for scrap tires and assisting in the abatement of stockpiled tires, has greatly contributed to the radical turnaround seen in scrap tire management, according to the RMA. Today, only 100 million stockpiled scrap tires remain and the number continues to shrink. While only one viable market for scrap tires existed in 1990, today several markets exist that consume nearly 85% of annually generated scrap tires. These markets have made scrap tires into a valuable commodity and have improved the environment, RMA said.

“RMA and its tire manufacturer members recognized a serious environmental issue and invested significant resources, time and effort to make positive changes,” said Charles Cannon, RMA president and CEO. “At a time when many things could have gone terribly wrong for the industry, tire manufacturers stepped up and did the right thing at the right time. Having achieved major success over the past two decades, RMA and our members have not relented and continue to work with a broad spectrum of scrap tire industry stakeholders and regulators to ensure that these successes are not reversed.”

Although the functions of the STMC were later absorbed by RMA, the mission, commitment and effort did not change. Since 1990, RMA’s scrap tire efforts have been spearheaded by Michael Blumenthal, who began as the STMC’s executive director and is now a vice president at RMA.

Blumenthal identified a key shortcoming of the scrap tire industry: a lack of information. “One of the first efforts we undertook was to collect, develop and distribute timely and pertinent information to the scrap tire industry,” Blumenthal said. “Between 1990 and 1996, reports and documents on virtually every facet of the industry were published. Information collection and distribution remains a critical practice to this day.”

Another challenge was market development. In 1990, only one viable market for scrap tires existed – tire-derived fuel (TDF). The scrap tire industry was trying to develop other markets, but the technology and market opportunities did not materialize until 1994. In the early 1990’s Congress was actively considering scrap tire legislation, and enacted a mandate to use ground rubber in federally-funded asphalt pavement projects. The result of that mandate was a disaster and taught a powerful lesson to the emerging scrap tire industry, RMA said.

“The scrap tire industry was under pressure to develop non-TDF markets at a time when the industry was not prepared for such an effort,” Blumenthal said. “One of the very expensive lessons that had to be learned by government agencies was that the scrap tire industry has always been a demand-pull industry. Subsidizing the supply of processed scrap tires when the demand for it doesn’t exist causes over-supply, falling prices and failing businesses. The Congressional mandate for road construction caused more problems than it solved.

“Today the scrap tire industry faces new challenges from a wide array of sources,” he continued. “As scrap tire-derived products move into new markets, new questions and issues have arisen. The recession has hit states hard financially and many have been diverting scrap tire funds to finance other state programs. We continue to fight these diversions so that progress to date is not reversed. Additionally, we are currently fighting a U.S. EPA-proposed regulation that would effectively ruin the tire derived fuel market, which still accounts for 50% of the market for scrap tires. This could lead to more stockpiles and greater risk of environmentally dangerous tire pile fires.”