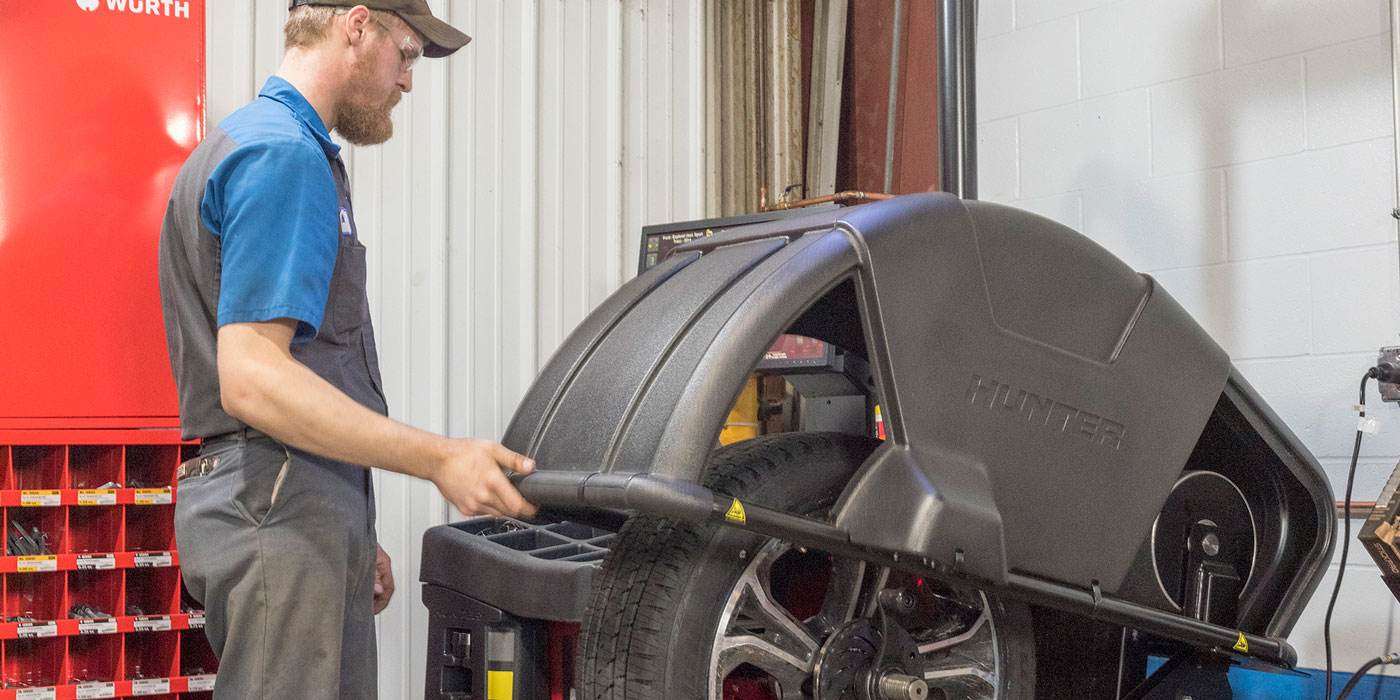 What RFV Means to the Tire Industry, Part 1

A radial force variation issue may prove to be the cause of a vibration that won’t reveal itself while performing only a wheel balance.

Radial Force Variation (RFV) is an important measurement in the tire industry that has been around since the 1970s but is often unclear.

The measurement includes vertical and tangential (fore-aft) tire forces that can cause vibration while rotating under load. It’s extremely important to measure during manufacturing and tire mounting on new vehicles; and it also should be important to you to be able to measure and provide the best possible ride quality for your customers.

Radial force variation can potentially occur with any type of tire, regardless of its construction (radial, bias ply, etc.). Most importantly, a radial force variation issue may prove to be the cause of a vibration that won’t reveal itself while performing only a wheel balance. If you don’t have a wheel balancer that measures a form of RFV and don’t have a trained tire technician, your shop will not be able to measure a form of RFV and provide the best ride quality.

In its purest sense, RFV is a controlled OEM-only tire measurement. Tire manufacturers and vehicle manufacturers measure tire uniformity as a gauge of quality. All tires of the same size, model and brand are not the same. Every production run is a bell-curve of uniformity.

Tires are graded in terms of uniformity build quality. Most tiremakers test tires at the point of manufacture to verify that the RFV is within allowable quality limits. The more uniform the tire, the better the ride. Tires that exceed these limits may be scrapped or sold to markets that do not require stringent quality. Vehicle manufacturers often specify uniformity levels and pay more for tires with less RFV if the vehicle has special needs or is driven at high speeds on very flat surfaces.

RFV is what manufacturers specify when they are building or purchasing a tire. It’s usually the “red dot” stamped on a tire sidewall that shows the high point/stiff spot location that is so important to locate and use during service. The tire/wheel is checked and match mounted (high point of the tire to the low point of rim) during assembly to be sure its mounted in a uniform way, and it is as round as possible before it’s balanced.

There are two types of OEM Radial Force Variation. The first is a low-speed tire test defined by the Society of Automotive Engineers as SAE Practice J332. The test for tire uniformity is performed under a high load on a perfectly-round rim without tire bead safety humps. The wheel is rotated at a low speed and measures the variation (pounds force) of the load acting on a locked spindle with a locked roller of about 38-in. diameter with force sensors. The test results are recorded only after the tire is cycled and warmed up.

True OEM RFV avoids possible measurement errors of rim runout, tire-to-rim bead seat mounting variations, centering errors and temporary flat-spotting that are encountered frequently in a service situation. An out of round tire with RFV of 26-pounds force (115 N,  approximately 0.020-in.) will induce a 26-pound force upward into the vehicle every rotation. The frequency of the force will increase in direct proportion to rotating speed.

A second form of OEM measurement is high-speed RFV measurement. The wheel and spindle are locked against a flat track with force sensors. High-speed RFV measurement is the latest technology and gives a better indication of high-speed RFV at the speeds normally encountered by a vehicle at highway speeds when vibration is most prevalent. Besides vertical RFV forces, a tangential (fore-aft) RFV force can also be measured. Many non-speed-rated tires with runout construction characteristics (such as light truck tires) can change shape significantly at highway speeds and exhibit RFV and imbalance that doesn’t show up during low-speed measurement or low-speed garage balancer spin speed.

RFV outside the OEM setting has a different, more “hands-on” meaning and can be related to many causes of tire vibration. These are the items you need to be aware of to keep customers coming back for all the good reasons. Tire and wheel vibration are the sum of forces that create movement of the vehicle spindle in a radial (upward and downward) motion. RFV pounds force is measured around the tire and the measurements are defined in terms of highest to lowest (peak to peak) measurements and the harmonics (waveforms) that interpret the many measurements taken around the circumference of the tire/wheel.

R2H, Radial Second Harmonic RFV, two bumps per revolution (like a football), are most often not displayed on shop RFV balancers and cannot be reduced by match mounting. In some cases, the tire can be loosened and rotated 90° to reduce R2H. The steering column in a vehicle is most sensitive to R2H causing steering wheel “nibble.” If both wheels on the front axle have excessive R1H or imbalance, it can set up a phase-related R2H intermittent vibration that comes and goes as the two wheels turn at slightly different speeds.

R3H-Radial Third Harmonic RFV, three bumps per revolution (like a triangle), is not often displayed on shop RFV balancers and cannot be reduced by match mounting. R3H vibration in a tire or wheel can add its vibration to driveline-related components with issues. As an example, a final drive axle gear ratio may be approximately 3:1 and if there are components failing and causing vibration, the vibration will add itself to R3H wheel vibration forces.

This goes on until the harmonics become high enough to become no longer felt as vibration but become noise. It’s good to know that NVH (noise, vibration and harshness) in a vehicle is the sum of many possible reasons. The tires/wheels are the primary excitation components but sometimes are not the only source.

Look for part 2 of this story in Tire Review’s upcoming February issue.

What RFV Means to the Tire Industry, Part 1