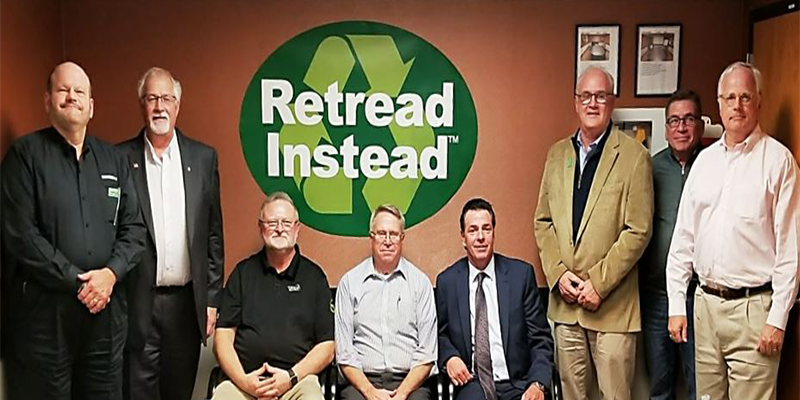 Retread Instead met with industry leaders informing them of legislative issues that would affect retreaders and their business.

Retread Instead, a coalition of retread industry supporters, amped up its campaign to push its agenda in Washington by meeting with industry leaders to inform them of issues surround their ‘Dear Senator’ campaign.

The attendees were informed on topics such as the Trump administration’s trade policy, website recommendations, updates on Europe’s progress in getting Chinese tires stopped and the need to rapidly expand the scope of support for the letter writing campaign.

“The meeting was a success and a unanimous decision was made to first and foremost zero in on the main goal of ensuring a full complement of commissioners well in advance of a possible ruling by the United States Court of International Trade on the appeal that the United Steel Workers Union filed,” said Ron Elliott, Retread Instead spokesman. “With the group’s collective resources, contacts and willingness to spread the word, we should see tens of thousands of letters going out to our U.S. Senators very soon. We cannot stop there and are calling on all of our industry brothers and sisters to take a stand and show their support by sending letters now.”

At the beginning of the year, Retread Instead launched its “Dear, U.S. Senator Letter Campaign” and since then, hundreds of letters have been sent out to all U.S. senators.

The campaign’s main goal is to educate and inform U.S. senators of the urgency of making sure that the U.S. International Trade Commission at all times has a full complement of commissioners to ensure fair and balanced determinations.

Prior to the launch of the campaign, the President nominated several people to the Commerce Department (Gilbert Kaplan, Undersecretary for International Trade; Nazakhtar Nikakhtar, Assistant Secretary of Commerce for Industry and Analysis) as well as three individuals for the USITC Commissioner positions.

Since the launch of the campaign, the Commerce slots have been filled (i.e., confirmation occurred) and one of the USITC commission slots has now been confirmed (swearing in on April 2) so, there are now three USITC commission nominees who have yet to have a hearing.

To support their efforts and write a letter to your senator, click here.