Beginning in 2011, HFO-1234yf was expected to come out on top as the new refrigerant of choice in Europe. While this issue may not affect repair shops and tire dealers in the U.S. for a while, some techs may already have seen HFO-1234yf systems, as European models begin the R-134a phase-out and make their way across the pond.

Due to a European directive requiring its automakers to use a lower ‘global warming potential’ (GWP) refrigerant in their mobile air conditioning systems beginning in 2011, HFO-1234yf was expected to come out on top as the new refrigerant of choice in “The Old World.” 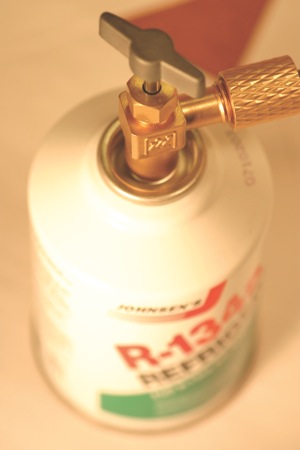 While this issue may not affect repair shops and tire dealers in the U.S. for a while, it is plausible that some (car dealer technicians, collision repairers and even tire dealer techs) may have already seen HFO-1234yf systems, as European models begin the R-134a phase-out and make their way across the pond. (R-134a is to be completely phased out of new Euro­pean systems by 2017.)

According to industry associations and refrigerant manufacturers, many of the world’s major automobile manufacturers and a variety of government agencies have studied HFO-1234yf extensively and found it superior to other potential replacements for R-134a. HFO-1234yf is a non-ozone-depleting substance with a GWP of 4. In comparison, the current refrigerant used in vehicles for the past 15 years, R-134a, has a GWP of 1,430.

Making the Case
The U.S. Environmental Protection Agency said it has conducted its own evaluation of the product, and proposed a rule under the federal Sign­ificant New Alternatives Policy (SNAP) that would approve HFO-1234yf for use in U.S. mobile air conditioning systems.

The Society of Automotive Engi­neers (SAE) also has had a hand in pushing the automotive industry toward this new refrigerant.

In November 2009, SAE International released its test results pertaining to the safety and environmental performance of R-1234yf being used as a worldwide, Llw GWP refrigerant for vehicles.

Based on the results, the sponsors of the SAE CRP1234 report have concluded that HFO-1234yf can be used as the global replacement refrigerant in future mobile air conditioning systems. ­From the evaluation and test results, it has been concluded that HFO-1234yf can be safely accommodated through established industry standards and prac­tices for vehicle design, engineering, manufacturing and service.

This latest report is SAE’s third evaluating this refrigerant, and was part of a two-year global research program created to determine the safety and environmental characteristics of HFO-1234yf. SAE’s investigation confirmed that HFO-1234yf is an environmentally friendly refrigerant suitable for use in direct expansion mobile air conditioning systems.

As part of this study, various automotive industry players conducted evaluations on a variety of vehicle applications. Additional testing and research was conducted at internationally recognized laboratories to verify worldwide acceptance for creating one common global replacement refrigerant.

SAE’s report was presented to 15 vehicle OEMs (from China, France, Germany, India, Italy, Japan, Korea, Sweden, the U.K. and U.S.) and to 18 Tier One suppliers (from Asia, Europe and the U.S.) for evaluation.
Following the release of SAE’s re­port, the European Patent Office said it planned to grant a patent for the new, low-GWP refrigerant.

Refrigerant manufacturers DuPont and Honeywell, working with the auto industry, jointly led the development of HFO-1234yf and said they were grateful for the patent opportunity.

“We are pleased that the European Patent Office has communicated its intention to grant a patent for the use of HFO-1234yf in auto air conditioning,” said Diane Picho, global business manager, DuPont Refrigerants. “DuPont will continue commercializing this environmentally preferable product with the additional intellectual property protection that this granted patent affords.”

DuPont also said it was conducting lab and field tests to evaluate HFO-1234yf and other refrigerants with similar attributes as more sustainable cooling solutions for stationary air conditioning and refrigeration.
The attention on HFO-1234yf also may deliver a blow to the CO2-based R-744-type vehicle A/C systems that had been under development in Europe.

While CO2 has a GWP of only 1, industry insiders said they don’t believe the automotive industry would be able to develop and market two different styles of A/C systems, and that HFO-1234yf units would be the logical choice over the high-pressurized CO2 systems.

Getting the Cold Shoulder
However, the move to the new refrigerant in the U.S. hasn’t been a “SNAP.” In 2010, the EPA decided to extend, for the second time, the comment period regarding the approval of HFO in new vehicle systems under the SNAP program.

The EPA said it was allowing stakeholders to consider some new information issued by the agency, namely a significant new use rule for HFO-1234yf, which would require manufacturers and importers of the refrigerant to notify EPA of any uses that differ from those outlined in premanufacture notices already filed with the agency.

Overall, the EPA’s document finds that there are no risks from the manufacturing, processing or use of this refrigerant if it is handled under the conditions filed with the agency.

Basically, this means no significant industrial or commercial worker exposure, no “do-it-yourself” consumer exposures and the HFO can be used only in new motor vehicle A/C systems and not retrofitted into existing vehicles.

One automotive association that took advantage of the extended SNAP comment period was the Automotive Re­cyclers Association (ARA). While ARA said it fully supports the intent of the SNAP program to evaluate and regulate substitutes for the ozone-depleting chemicals that are being phased out under the stratospheric ozone protection provisions of the Clean Air Act, the association is urging the EPA to look at the total lifecycle of the fluid, and consider all ramifications that may occur from the use, and ultimately, the disposal of the new refrigerant.

ARA has raised several areas of concern regarding potentially adverse consequences from the use of the new refrigerant. In comments provided to the EPA, ARA outlined those concerns to include the recyclability, safety and feasibility of HFO-1234yf regarding the environment, automotive recycling employees and the general public.

The specific questions raised highlight the need for further information and in-depth research for handling this new refrigerant during the dismantling process of an end-of-life vehicle, to identify any associated occupational dangers or potential costs that could be incurred by automotive recycling facilities and their employees, or any environmental impact it may have to the public regarding air quality or storm water run-off, which are two key issues of concern for the professional automotive recycler.

The current ruling, according to the ARA, does not address these concerns with any specificity. The EPA expressed a willingness to address these issues and gain more of an understanding about the automotive recycling industry as it moves closer to administering a final rule.

“ARA is pleased that the EPA will address end-of-life disposal specifications in a follow-on rulemaking, and looks forward to working with EPA staff on this matter,” said Michael Wilson, ARA executive vice president.

“Professional automotive recyclers have the expertise, availability and willingness to assist the EPA with reaching a final decision that protects the environment, addresses safety concerns and imposes the least amount of undue burden on the automotive recycling industry.”

Refrigerant Change from R-134a to HFO-1234yf is Underway