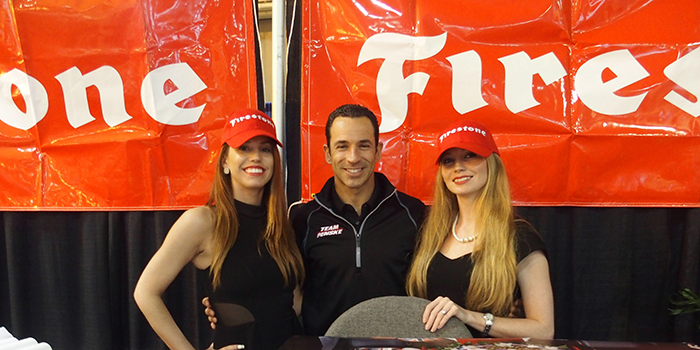 At the North American Tire & Retread Expo in New Orleans last week, Tire Review sat down with award-winning IndyCar racecar driver Hélio Castroneves. In addition to his many racing accomplishments, Castroneves competed in the reality TV show Dancing With the Stars, winning the competition with partner Julianne Hough in the show’s fifth season. Castroneves also participates in charity work.

Castroneves was invited to the North American Tire & Retread Expo to sign autographs at the Firestone Racing Tires booth. Days before the expo, Castroneves placed second in the Indy Grand Prix of Louisiana at the NOLA Motorsports Park.

Tire Review: You’ve worked with numerous charities over the years. Can you tell me a little bit about your passion for helping others?

Helio Castroneves: For me, it’s the education. My parents were Catholic. In our minds and spirit-wise, charity is the right thing to do. Some people maybe don’t agree or believe it. But I believe it. You’re paying forward. It’s something that helps to clean your soul. That, for me, is the way to do it.

TR: How does your experience on Dancing With the Stars relate to racing?

HC: The focus, for sure. People don’t realize that, even if you’re dancing, it’s not about looking good and shake-shaking around. There actually is a specific technique. I was coached, so anything that you’re coached to do you must pay attention and be dedicated and work really hard. Those are the similarities.

In terms of feeling, it’s different because I have a car. I feel it when I go fast. And racing is all by myself. Dancing – I had to relate to my partner as well. But what impressed me was that when I put my mind in an uncomfortable territory, I proved to myself that I could do it. No matter what kind of work, as long as you put your mind and hard work into it, you can do it.

TR: How are the new IndyCar aerokits going to affect tire wear on the race course?

HC: Tires, for us, is a big part of racing because they are what is in contact with the track. It doesn’t matter how the car responds, the translation from the track to the car is in the tire.

Right now, the tire management has been better with the new aerokits. The numbers from downforce – to give an example, here in NOLA, we were about 5,000 lbs. of downforce. Last year, we were about 4,000 lbs. of downforce. So the numbers are astronomic. But when you say 1,000, people don’t realize that when you find a 100 pound difference that’s astronomic. So the scale from 4,000 to 5,000 is huge. That has an impact on the tires, on us physically and on the setup of the car because that represents about a second in what was last year’s time.

TR: What’s next? Are you looking at NASCAR at all? Are you going to continue with IndyCar?

HC: Soon I’ll be about 20 years in IndyCar racing. I keep asking veterans or people that are nearing retirement how they found out it was time. They all came to me with a very similar answer: I’m not having fun anymore. I don’t want to go through this anymore. I’m done. And, I cannot believe that. Sometimes I have bad days where I think that this is the time, but then I sleep on it and say this is what I like and enjoy. I still have the fire and I’m competitive and I’m having fun – that’s why I don’t see myself very soon doing something else.

I don’t think NASCAR is for me; however, I’ve never drove a NASCAR before. But, seeing my other friends try NASCAR and not succeed, I don’t see why I’m going to be the special one that does it and succeeds. But, I would love to try it – don’t get me wrong. In life, you have to try everything. I want to stay in IndyCar and have another ring on my finger here – or two more.