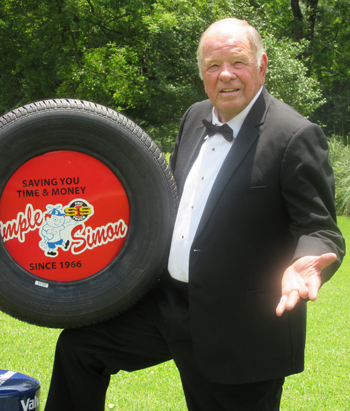 In 1966, an ad in the newspaper and a $1,500 loan helped a country boy from Oklahoma find work running an Esso service station in Baton Rouge, La.

“Being an independent tire dealer gives me the flexibility to do the best I can. We work hard and we stay focused and it gives us the privilege to make the best living that we can for our families and be of value to more customers,” Simon says.

Simon was born and raised on a farm in Oklahoma. As one of nine kids, he lost his father to cancer at age nine and developed his work ethic while working hard to keep the farm running and  put food on the table for his family. He left the farm in 1959 when he was drafted into the army and found himself in Louisiana when he got out.

During Simon’s first year in business, he hired one full-time employee and worked 15-hour days, seven days a week to get his business off the ground. A year later, with some policy changes, the Esso service station became Simple Simon Tires.

In August, Simon turns 80, but that isn’t slowing him down. Simon is still the star of the tire dealership’s many commercials, sometimes as the character, Momma, and is still fully involved in  sales, promotions, charity work and industry organizations.

“The old independent tire dealer’s still the big factor in the world after the box stores and automobile dealers. They all sell tires, they can do all the things we can do, but they just can’t do it like we can. They can’t do it. They just don’t have that care, that trust relationship that I think independents and their families have.”

Going forward, Simon thinks Simple Simon’s next 50 years will be even better and he takes one day at a time.

“It’s been a rewarding business for this old country boy,” Simon says. “I had nothing and have been at it for 50 years in the retail business and I got more than any country boy ever thought he could acquire. I bend a knee every night and I’m thankful for the opportunity to serve and do what you can to prove yourself and bring the families who work for me along the way too.”

Advertisement
In this article:Simple Simon Tires

Are You a Leader if No One Follows You?

Is Your Business Growing?
Connect with us