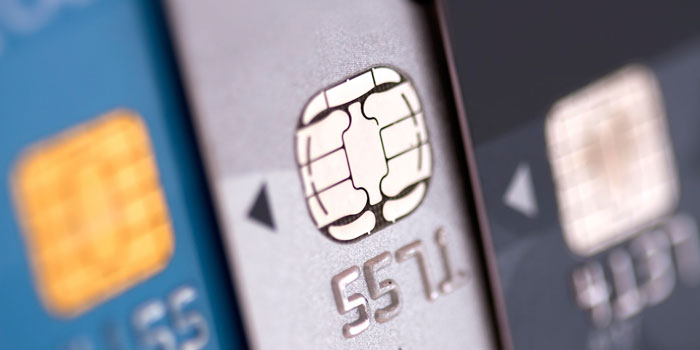 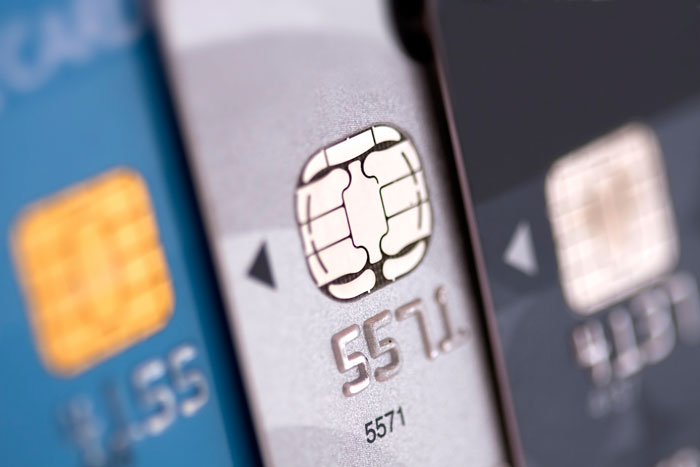 Gone are the days of credit card swipes being the common form of retail transactions. A credit card with a small computer chip called an “EMV” will begin its takeover Oct. 1, 2015, which also marks the shift in fraud liability on credit card charges.

After years of success in Europe, the EMV cards are slowly becoming the norm in the U.S. The grocery store, local mall and even the tire dealer are slowly switching their standard credit card terminals to be EMV compatible, or must decide to do so before the liability shift.

EMV technology started in Europe in the 1980s and was formalized in 1994 by the three companies it’s named for – Europay, MasterCard and Visa. Today, EMV is overseen by EMVCo, which is equally owned and operated by American Express, Discover, MasterCard, JCB, UnionPay and Visa.

The EMV card looks exactly like a regular credit card except for a metallic square chip located above the first four digits of the credit card number. This chip is a small microprocessor – a computer chip – that stores the card user’s data and security keys.

The retail industry is trying to address two types of fraud by implementing the use of EMV chip cards, says Randy Vanderhoof, director of the EMV Migration Forum, an association created in 2012 to unite U.S. payment industry stakeholders facing the country’s move to EMV.

“One, is counterfeit card fraud where the account data that’s encoded on the magnetic stripe of plastic cards can be copied, or we call that ‘skimmed,’ where the information can be stolen off of a card and then programmed onto a second card, creating a duplicate or counterfeit version of the first card,” he says.

This tiny chip is supposed to thwart counterfeit card fraud with two different technologies. The first involves the card user’s data and security keys stored inside the chip, which cannot be duplicated even if the data is copied. Secondly, the chip also holds a one-time, unique code called a cryptogram that proves the card’s authenticity and unique transaction data.

Edwin Mann, president of Mann Merchant Processing, says the switch to EMV cards is a transition period. He expects 30% to 40% of credit cards to have EMV chips by the end of the year, and 90% by the end of 2017.

“What EMV does is add a little bit of additional data to each card transaction so that data that is then processed by retailers is unique each time the card is used. If someone steals that data they can’t use it to successfully create a counterfeit card or make a counterfeit payment transaction using that same payment data a second time,” Vanderhoof adds.

Other countries implementing EMV technology have seen counterfeit card fraud drop by as much as 70%, Vanderhoof says.

The second type of credit card fraud being addressed by the implementation of EMV cards is the unauthorized use of lost or stolen cards. This type of fraud can be addressed by adding a four digit PIN to an EMV chip card, he says.

“This is really for preventing what we call in-store fraud or ‘card-present’ fraud where a person uses the physical card in an electronic point of sales system to complete a transaction,” Vanderhoof says.

“So EMV does not address online or ‘card-not-present’ fraud. It’s designed specifically to address in-store fraud, which today roughly 90% of purchases are done in physical retail settings, not online.”

Costs of the Switch

The biggest question arising with the looming deadline is “Do I have to switch my terminals?” The short answer is no.

“Retailers really need to pay very close attention to the changes that are happening with EMV and payments because after Oct. 1, the liability for counterfeit card fraud is going to shift to the least secure party in the payment transaction – the retailer,” Vanderhoof says.

Currently, a small business that has a customer pay with a fraudulent swipe card does not normally face costs for the fraud if they can prove the transaction occurred. The bank that issued the card will pay the chargeback costs, of the fraudulent transaction.

After Oct. 1, businesses that do not use an EMV reader will be responsible for chargeback costs on fraudulent purchases. This fraud liability shift could become expensive and even unmanageable for a small business.

For example, a tire dealer sells $4,500 in new UHP tires and shiny wheels, and accepts a traditional swipe transaction for payment. The purchases, though, were made with a stolen credit card, and under the new liability shift rules, that dealer is on the hook  for the $4,500 chargeback.

“Merchants need to understand what’s going to change after Oct. 1 in terms of their liability for fraudulent card transactions in the store,” Vanderhoof says. “The second thing is they really need to assess what their current point-of-sale hardware and software consists of because some systems need to be totally replaced while other systems require hardware and software updates to make them EMV enabled.”

If you choose not to make the switch, your business will most likely not face any upfront costs. Chargeback fees can drastically vary depending on the purchase. The lost sales from a full set of tires is already a lot for a dealer, let alone a couple dozen sets. It’s also possible the bank will charge you a reoccurring fee for not using EMV-capable terminals.

Purchasing EMV equipment can also be expensive depending on if your processing provider will upgrade your equipment for free and/or how much your equipment needs upgraded. 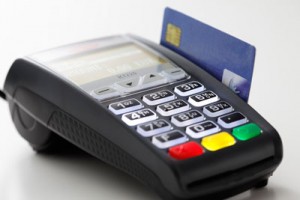 EMV terminals, like this Ingenico iCT 220, prompts customers to insert their card (chip facing upward) into a slot in the terminal, which is often located below the keypad.

“Pricing can range from a few hundred dollars to thousands of dollars depending on how complex the retail point-of-sale system is in the store,” Vanderhoof says.

Hot Rod Processing, a credit processor that serves hundreds of independent tire dealers through the Tire Industry Association, has been helping clients through the transition to EMV terminals.

Edwin Mann, president of Mann Merchant Processing, which powers Hot Rod Processing, says the switch to EMV cards will take a bit of a transition period. He expects 30% to 40% of credit cards to have EMV chips by the end of the year, and 90% by the end of 2017.

Bank of America, Chase and American Express already started issuing chip cards in 2014, while banks like PNC started sending out cards this year and FifthThird expects cards out in 2016. Even with the majority of cards still without EMV chips today, making sure your terminal will accept a chip card is still important.

Hot Rod is currently offering to upgrade their customers’ existing processing hardware to EMV and near field communication (NFC)-ready hardware on a free-loan basis. Tire dealers who are TIA members can also get this free upgrade.

If you are making the switch to EMV terminals and looking to find a good device for your business, the Ingenico iCT 220, PAX S80 or VX520 Veriphone might be a good fit, which are the main terminals Hot Rod is sending its customers.

“They are all ahead of the game as far as getting ready for EMV,” Mann says. “Probably the one that’s progressed furthest at this point is Ingenico.

“The Ingenico is ready right now, but there are some hiccups, which we expect,” Mann adds. “But for all intents, the applications are in the terminals because they were being used in Europe and Canada. That gave them a head start on the EMV situation.”

“We all know what’s going on in the tire industry and the margins have to be cut as much as we can,” says Sean Skutches, national consultant for Hot Rod. “And even to spend $500 for a terminal for some of these guys is a lot of money.”

Like any technology, however, EMV terminals could be subject to change in the future, especially as NFC technology, such as Apple Pay, is gaining popularity.

“Most of the hardware sold that is capable to accept the EMV chip cards is also capable of accepting mobile payments such as Apple Pay,”  Vanderhoof says. “So they could get the added benefit by upgrading for EMV to start accepting mobile device payments.”

By using an EMV terminal that already accepts NFC-ready technology for payments like Apple Pay or Google Wallet, your business is a step ahead in providing technology that should protect your business from card fraud and offer your customer more secure payment options.

Whether you think your business is ready to take on these new payment methods or not, considering the liability shift and the potential costs your business could face from not making the switch to EMV-capable terminals is critical not only to your business, but also to your customers.

Not switching your terminals certainly puts your dealership at risk of more fraudulent credit card charges.

“We want to make sure that the merchants are ready to take chip cards by Oct. 1,” Mann says. “And that’s the way we have to look at it. Across Europe and Canada, when they had their change-over date – even when customers didn’t have problems with counterfeit cards – fraudulent cards came out of the woodwork.

“We believe it is going to become a lot more prevalent once Oct. 1 comes because counterfeiters are going to be out there specifically looking for retailers that don’t have chip card capability.”

Advertisement
In this article:credit card processing

Preparing for Chip Cards and the EMV Switch