Point S, a Europe-based independent tire dealer network, has entered the Canadian market by signing an agreement with the Canadian group Pneus Unimax. 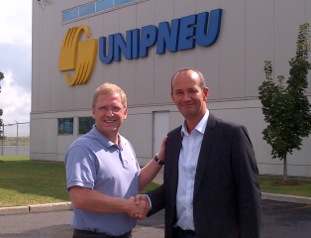 Unimax is owned by 77 independent tire dealers with 133 locations under the Unipneu banner. Founded in 1979 in the Quebec region, the group sees annual sales of 2 million tires with its multi-brand approach and a strong logistic organization, with four warehouses across Canada. By joining Point S, Unimax plans to complete its coverage in the Quebec region and accelerate its expansion in the Canadian market, according to Point S.

“We share with Point S the same company culture through the independent status of our members who are also our shareholders,” said Bruno Leclair, Unimax president. “We have also been impressed by the cohesion and international vision shared by all the national Point S managers we met. Even if they are working in different markets with their respective local specificities, they are all sharing a common strategy and supply policy. Our interest in being the Point S Master Franchisee for Canada was also motivated by the international image and recognition of point S we will use to expand our network with a long-term target to represent 300 retail outlets.”

Point S – which now covers 27 countries with over 2,500 retail outlets and annual sales of 15 million tires – entered the U.S. market in November 2011 in cooperation with the Independent Tire Dealers Group, which has 365 points of sale. The deal with Unimax is the next step in its development plan for the North American market, Point S said.

Pirelli Talks EV Tires for the Aftermarket, Investing in North America
Connect with us