By any measure, there is no bigger auto racing stage than Formula One. Bar none.

It also is the most expensive form of motorsport in the world. Each team, depending upon how competitive it wishes to be, can spend anywhere from $120 million to $190 million per year. That tidy sum covers things like required fees, a base of operation, multiple chassis and spare parts, car bodies and spares, multiple engines, various electronics, the driver, crew, travel and transportation expenses and much, much more. Even the steering wheels cost $25,000 apiece. And, oh yes, let’s not forget the tires. 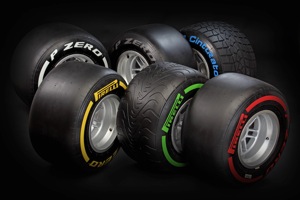 A 20-race season over six months, with each race run in a different country, on very different types of track surfaces and in a wide range of weather conditions – on top of moving your base of operations to six continents – makes F1 a simply amazing show for the world to witness.

And when it comes to the tires, there are some operating statistics that just blow your mind. For example, not including practice and test laps, a typical Formula One race car will run more than 4,000 racing miles per season. Pit stops (now tire-only) are as fast as 2.82 seconds to change all four tires. And the complete 2011 Formula One season consumed some 24,000 tires – 21,100 dries and 2,900 wets, to be exact.

From a tire perspective, at the center of this stage is Pirelli. And if there’s a single key observation one can take away from last year’s world championship, it was that regardless of how unstimulating tire compounds may seem, they’re highly critical to creating exciting, yet safe, racing.

Now into the second of a three-year contract as exclusive tire supplier, Pir­elli has recognized great success, and took the opportunity this past Janu­ary to review and reveal its plans for the upcoming Formula One season.

Pirelli took center stage at the Yas Marina Circuit in Abu Dhabi, UAE, a circuit that often is described as “mag­nificent and stunning.” Jour­nalists from around the world were invited to meet with Pirelli SpA chairman Marco Tronchetti Provera, company motorsport chief Paul Hembery, and Maurizio Boiocchi, Pirelli director of research and development and the “father” of Pirelli’s famed P Zero, as well as the tiremaker’s other global marketing and racing staff. 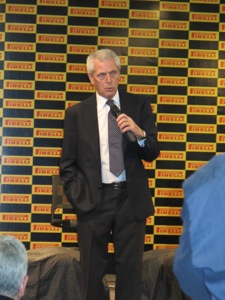 The chief purpose of the global gath­ering was an introduction of Pir­elli’s 2012 Formula One tire lineup, and the chance to spend some one-on-one time with the architects of the tires that keep the series running.
With the selected 2012 race compounds on stage and covered under a black veil, the trio addressed the med­ia about both the new rubber and Pirelli’s plans for the upcoming season that includes Formula One’s return to the U.S.

In surveying all of the glamorous aspects of Formula One – from the locations to the guests (movie stars and heads of state) to multi-million dollar racecars – one knows how un­glamorous tires can be, but somehow Pirelli finds a way to bring an im­mense amount of spark and pizazz to bear. It leaves nothing on the shelf.

2012 Season Lineup
For the 2012 Formula One season, Pirelli is making some changes to its race compounds, much in keeping with the performance characteristics requested by teams.

At the same time, the changes are also in line with sanctioning body FIA’s expectations that the tires help to provide entertaining competition, with at least two pit stops per race and creating the opportunity for a wide variety of strategies based on track and weather conditions. Those were Pirelli’s marching orders from FIA last season, a point much lost on both race teams and motorsport med­ia. The tiremaker did its job, and it wasn’t until later in the season that teams and reporters understood how its approach to race tires did improve the on-track product.

The tires that will be used in 2012 have a squarer profile in order to improve the wear rate, especially on the shoulder of the tire. The new front and rear profiles are designed to distribute stresses more evenly across the contact patch, and to deliver more grip at the rear. Generally speaking, the 2012 tires will be less conservative than last year’s options. 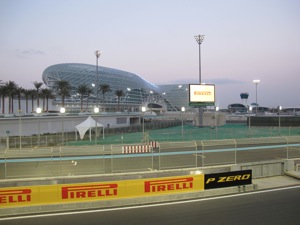 As with last year’s race tires, Pirelli’s slick tire lineup will be color coded: P Zero Red, a super soft tire for street circuits (remains unchanged from 2011); P Zero Yellow, a softer but more blister-resistant tire that offers higher levels of grip, which results in a shorter lifespan but a rapid warm-up time (enhanced from 2011); P Zero White, a medium tire suited to all conditions, and an option tire that can be used on tracks with high temperatures or ab­ra­sive surfaces (slight enhancement from last season); and P Zero Silver, a hard but not inflexible compound de­signed for maximum durability, considered ideal for the long stints (same as 2011).

When it’s wet, Pirelli has the Cin­turato Blue (the name “Cinturato” is derived from its radial innovation in the 1950s), which offers significantly deep grooves similar to a road car tire. However, in comparison, Cin­turato Blue is designed to expel more than 60 liters of water per second – six times more than the street tire. Cinturato Green is the intermediate tire for light rain, and remains un­changed from last season.

In addition, “spectators can look for more pronounced markings on the sidewalls and bolder color stripes,” according to Tronchetti Pro­vera, adding that this allows spectators to better follow race strategies. “These changes will provide more opp­ortunity for passes, and help make a better show.”

Pirelli also is hoping the alterations to the compounding will ensure more multi-stop races.

In the end, 2011 was Pirelli’s first Formula One season since 1991, and it was considered an overwhelming success. “When you perform on the world’s largest racing stage, there is no room for anything but success,” said Tronchetti Provera.

So, in 2012, according to Hembery, “the changes were minimal, with minor tweaks rather than wholesale changes.” In fact, drivers and teams congratulated Pirelli on improving the racing spectacle and adding new and exciting dimensions to each of the races.

When asked for Pirelli’s major take-aways from Formula One racing, Tronchetti Provera responded by saying, “Exclusive opportunities that pertain to the tire modeling, mastering material sciences and manufacturing processes that lead to new, patented systems.”

And with Formula One returning to the U.S. – Nov. 16-18 in Austin, Texas – what benefits does Pirelli Tire North America expect?

The company’s response was simple: “Pirelli is able to solidify its position in that market and demonstrate its advanced technologies on a stage that is considered the most advanced proving ground in the world. No other tire company has this opportunity. Coupled with our new factory in Mexico that will open this spring, we believe we are positioned to advance our brand.”

To view exclusive photos from this event, click here.