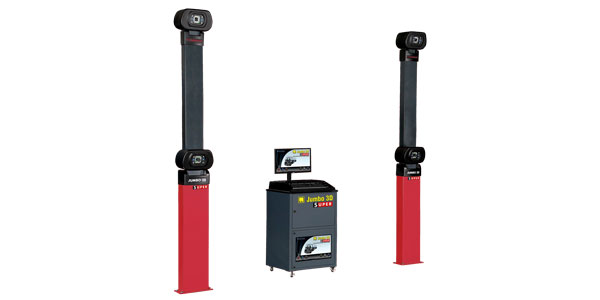 Pinnacle’s imaging technology enables shops to align a tractor and trailer up to 62-feet in length.

Pinnacle Automotive Systems has released the next generation of its new Jumbo 3D Heavy Truck Aligner, the J3DHDA, which the company says can align six axles simultaneously in under three minutes, which can also include two steer axles.

Pinnacle says its imaging technology enables the company to align a tractor and trailer up to 62 feet in length. Other new features include drawbar guage, drive through, bushing calculator, steering lock, frame-based axle alignment and frame reference input.

The drawbar guage feature aligns a full trailer fitted with a swiveling tow bar at the front. The drawbar gauge fixed on the tow bar will align all the axles parallel to it.

The drive through is an upgradable feature designed for fleet applications. This add-on feature takes vertical camera columns and spaces them out to four meters; this allows the vehicle to pass through in between them and enables the technician to drive straight out instead of backing the vehicle out.

The bushing calculator enables the Jumbo 3-D to make adjustments on the wheel in free mode.

Steering lock is a new safety feature that locks the steering wheel against the floor instead of the driver seat.

The company says frame-based axle alignment is now easier to use; before this feature, technicians could only align the wheels now they can align the frame.