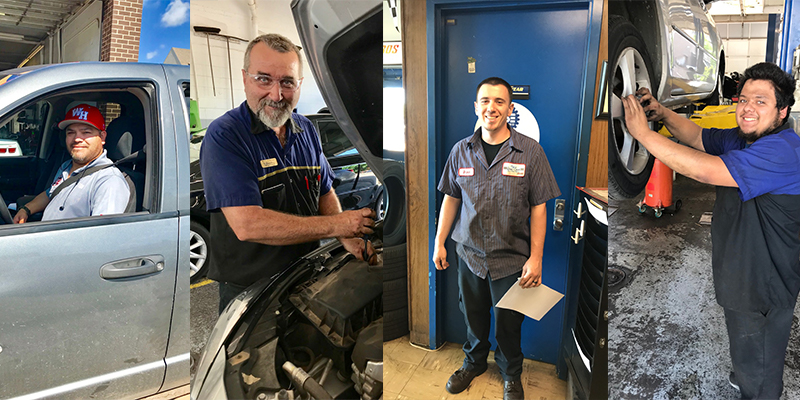 Something magical is happening at Pat’s Auto Repair – Tire Pros. A big part of that difference came from the “Four Amigos.”

I can’t tell you how many times over the past 21 years how many tire dealers, owners and executives have told me that they’re not going to spend money on training programs for their employees because training doesn’t work. To paraphrase, “those knuckleheads at my shop just can’t learn anything.” I also hear that you can’t teach an old dog new tricks, and the younger dogs just don’t care.

I beg to differ. And I have proof – a real-life example that continues to amaze me.

Something magical is happening at Pat’s Auto Repair – Tire Pros. After admittedly staring into the abyss of business hardship, owner Pat Smith made a significant change and created a “learning environment” inside his OKC company with incredible results.

A big part of that difference came from an unusual cast of characters who I call the “Four Amigos” – Brock Webb, Jonathan Elizando, Monty Jones and Tore Johnson.

Who are these guys? The Four Amigos consists of three general service techs and one driver – all helping to transform Pat’s Tire and grow sales while creating huge value for themselves, the company and customers they interact with.

Now, these four guys would not be thought of as salespeople in most companies. In fact, I doubt they’d be even be called on to communicate with customers. But Pat is a different type of owner-operator. He has come to realize that effective communication means more customers and more sales.

Each of these four individuals were given the opportunity to learn. They have each embraced what I refer to as the “Language of Commitment.” About once a week they take part in a 30-minute sales training, then they take what they’ve learned and put it into practice with customers in the store. They have demonstrated over the past year that not only can they learn how to communicate but they can excel at it.

When the regular sales team is tied up you can rest assured that one of the Four Amigos will pick up the phone and “hit the ball.” They know the phone approach and they work it to a “T.” This provides owner Pat Smith with peace of mind because every one of his customer-facing employees and the Four Amigos are on the same page. The conversation is easy, natural and a real game-changer when it comes to setting appointments and getting more customers in the door.

Brock, a general service tech, has shown a high level of dedication, commitment and skill with customers. His closing percentage on inbound calls is right up there with the best salespeople in the company. And his skill has enabled him to seriously enhance his overall value inside the company and in his personal life. Maybe it’s the discipline he gained while serving our country for four years in the Army. Whatever it is, he’s on the move at Pat’s.

Young Jonathan, 21, shows up with a great mood every day, does his main job as a general service tech and then regularly grabs the phone when the opportunity is there. Jonathan can really hit the ball, too, converting calls into appointments on a regular basis.

Monty Jones is a “graybeard” like me, but don’t tell this dog he can’t learn new tricks. Monty shows up and practices with the best of them. At first, he was nervous, but now is a shining star of what’s possible. Customers love speaking with Monty.

Tore is a driver. He drives customers around, picks up parts and works his communication magic both in the car and on the phone. You can be assured that Tore is an “I-can-help-you-with-that” sort of employee, in the store and on the phone.

I believe that the lesson is this: If you have something of value to teach and you give people the opportunity, they will take advantage if they can see what’s in it for them.

The Four Amigos are getting something out of it – real satisfaction in helping people with a sense of pride in what they do. And they are returning value to Pat Smith in spades.

According to GM Jake Nicks, “Our business is growing, our advertising is working and we realize now that we are in the communication business.”

The bottom line is that training is more about growing your people than it is about moving products. It’s the people skills that will make a real difference in your shop’s growth.

Dan Molloy is President and CEO of Molloy Sales Development Group, which helps companies unlock the personal power of each and every employee. Learn more at https://www.molloysales.com/. We also invite you to take advantage of our 20% Growth Blueprint, as part of our 20% in 2020 program.