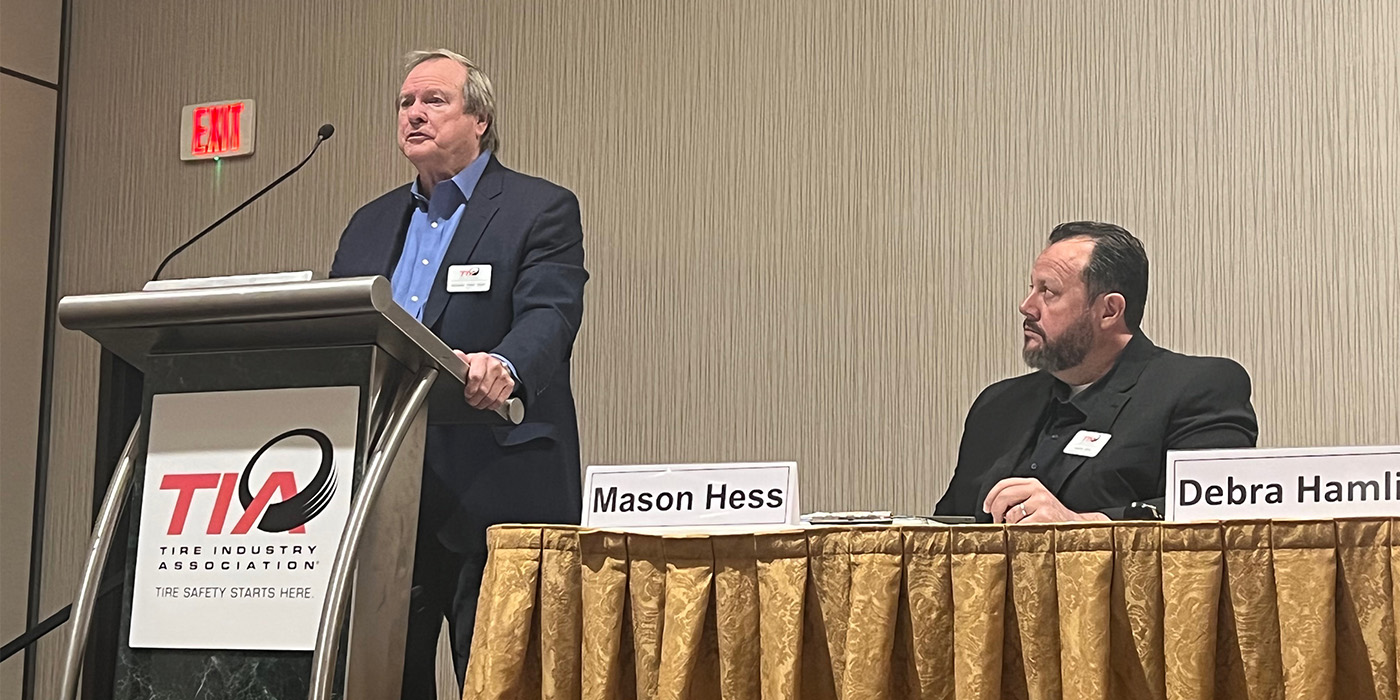 The Tire Industry Association (TIA) hosted its annual membership meeting Monday afternoon, where members of its board and executive committee passed the torch to the association’s next president, recognized new board members and passed a timely resolution on right to repair.

“From this year’s president to the next, it has been a pleasure and honor for me to serve as president of this thriving organization,” Hess said. “I wish the same level of success for you in the years to come.”

In accepting the transfer of duties, Pangle said, “I look forward to leading the organization over the next 12 months. I’m excited for the opportunities and challenges that lie ahead and I’m thankful for the support of the TIA staff and board.”

Pangle brings with him more than 40 years of experience in the tire industry. He joined Fountain Tire, in Edmonton, Canada, in 1973 and started as a store owner servicing retail, commercial and farm tires. From there, he expanded the business into truck tire retreading and later added OTR sales, service and retreading. He later took a role with the corporation as senior vice president where he was responsible for 166 stores, retread plants, commercial sales and mine service, TIA says.

Pangle began his service on the TIA board in the mid-1990s and has participated in the Training and Education, Strategic Planning, Nominating, Membership and Government Affairs committees, and most recently, the Environmental Advisory Council.

As one of his first orders of business as TIA president, Pangle recognized TIA’s incoming and reelected board members. Those include:

The new Board members, who will serve three-year terms, were selected from a slate of 13 candidates vying for the four open positions, TIA says. Voting began in early July and ended Sept. 1. The newly elected board members will join an additional 14 directors to make up the association’s 18-member board, the association says.

TIA also recognized the winners of this year’s Michelin/TIA Scholarship Program. The 2022 scholarship recipients are:

The scholarship program, now in its 22nd year, was established by Michelin North America for employees of tire dealers who are members of TIA, the association says. Hess said since the start of the scholarship in 2000, about half a million dollars has been awarded to the children of TIA members.

“This is an extremely important issue for us,” said Dick Gust, TIA CEO, in introducing the resolution to TIA membership at the meeting. “A national law would provide much clarity and direction on vehicle repair.”

In the resolution, TIA said it deems current law inadequate to address the growing competitive concerns created by new vehicle technology that controls virtually every function of the vehicles from brakes, to steering, to airbags, to fuel delivery, to theft protection and tire pressure. The resolution states that TIA will support the REPAIR Act and continue to explore other options for federal legislation that would support the motor vehicle owner’s right to repair. In addition, it urges the authorizing committees within Congress to consider the REPAIR Act.

As part of the resolution, TIA said it will plan to work with the Federal Trade Commission on future legislation to ensure that independent repair facilities have access to vehicle information and to ensure the consumer’s ability to choose the repair facility of their choice.

TIA affirmed that Right to Repair remains a top priority for its members and a national law would provide for much-needed clarity and direction in vehicle repair.

With its passage, the resolution will be added to all other resolutions adopted by the association previously to dictate association policy, TIA says. In addition, it will be forwarded to the TIA membership, to related industry associations, tire manufacturers and to all 435 members of the House of Representatives and the 100 United States senators.

Advertisement
In this article:board of directors, SEMA, Tire Industry Association