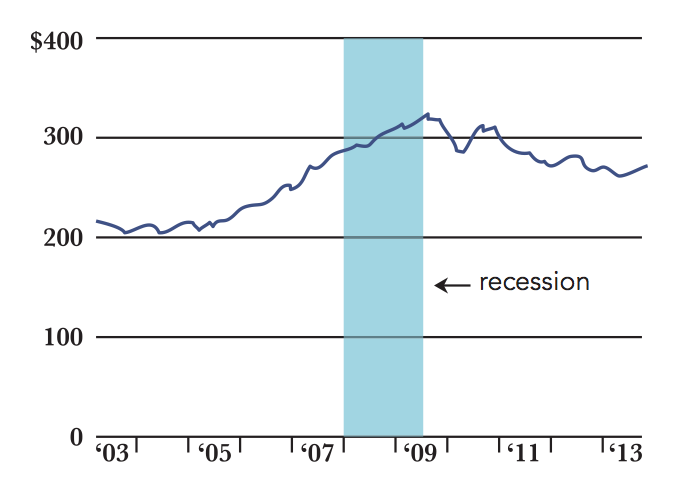 Lessons from history would tell us that OTR tire demand is forever a cyclical phenomenon. There are always highs, higher highs, lows, and even lower lows. It never stays as good as it seems when demand is high, and the market never stays as bad as when things are down. It is a classic moving target.

Why is it that way? The easy answer is that things change. We live in an increasingly smaller and more inter­connected world. What happens in Brazil or China can have major ram­ifications in the U.S., and vice versa. Geographic borders cannot contain market or economic re­shuffling; when one country catches a cold, everyone starts sneezing.

But looking to the future, the good news is that things seem to be getting better. Mining is improving from previous lows, albeit at a slower pace than what might have been expected. Longer-term growth drivers have not changed, which should mean market strength over the long haul.

According to a recent Credit Suisse survey of Caterpillar equipment dealers, 95% are exceeding their sales forecasts for 2014, expecting this year to be 8%-12% higher than last year. Even better news is that dealer inventory levels are “very low” and used equipment is hard to come by. The equipment rental segment also appears to be strong this year.

A new study by Grand View Res­earch Inc. shows that the global market for construction and mining equipment is expected to reach $208.36 billion by 2020. This positive view is driven by expectations for increased infrastructure projects globally, and growing mining demand during the next six years. 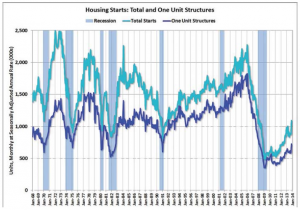 The downturn in housing actually started before the economic collapse, and finally bottomed out in 2009 – three years later. (Click to enlarge)

Industry Consolidation: It is hap­pening and happening fast. Whether it is in mining and minerals, aggregates, construction or gas/oil drilling; this consolidation trend continues and based on recent activity it is not ready to subside.

What this means for tire dealers is that their customer pool is much more shallow than previously. There are fewer customers in total, and the ones that remain are much larger and wield sig­nificantly more power than before. Their wallets are bigger, but their demands are much greater.

Today’s dealers will need to assess how this is really impacting their busi­ness. Generally, bulkier customers mean greater cost to provide necessary ser­vices, and typically lower margins as national account or direct billing schemes from tire manufacturers come into greater play, restricting how much profit a tire dealer can make on sales.

Technology & Cost Containment: The latest technology innovations in mining are leaning heavily toward automation, with fewer people and larger equipment called on to deliver higher productivity, with a critical re­quirement to drive down costs.

During the last mining boom, producers were driven by high demand and attractive commodity prices to reach ever-higher production levels, often at the expense of cost man­age­ment. As market demand plummeted, however, those locked in with high fixed and variable costs from that boom period experienced an additional level of pain.

The lesson has been learned, and today – and for the foreseeable future – we can expect a more moderate app­roach to cost containment. That will impact tire contracts and acquisition prices, along with service pricing from tire providers. Whether it’s tire or service costs, buyers will be much more jud­icious about the type of contracts they enter into, and will look at how to better manage their cost structure.

The end result should still focus on reducing total out-of-service (downtime) cost, but expect that up-front acquis­ition prices will play a bigger role, even during the recovery period. 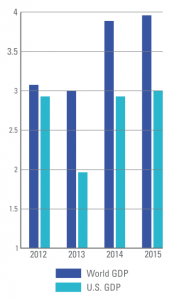 The U.S. gross national product (GDP) continues to lag behind that of the rest of the world. (Click to enlarge)

Some emerging trends to keep an eye on: Market growth will generally not be the same for everyone. Regional differences based on specific demand and geo-political influences will create both challenges and opportunities for equipment operators and tire dealers.

For coal in general, the prospects of recovery remain guarded. The comb­ination of cheap natural gas and pol­- itical pressure over global warming concerns will mean that demand for “steam coal” may remain muted, while metallurgical coal demand may see a better rebound when stronger steel consumption resumes.

In Western Canada, the boom in Alberta’s oil sands region has pulled back some and that business faces stronger headwinds based on political and environmental protests over mining claims in the region.

Iron ore and copper – along with other precious metals and rare earths – seem to be well-placed for continued strong demand as the flagging global economy increases demand for finished goods.

Housing starts and highway spend­ing typically drive the con­struction sect­or in the U.S. And when those con­struction segments kick in, there is also a positive parallel demand increase for aggregates and other mined comm­odities (copper, for example) needed to support that infrastructure growth.

From the heady days of major in­frastructure investment spurred by the Safe, Accountable, Flexible, Efficient Transportation Equity Act (SAFETEA-LU) in 2007, where an estimated $146 billion was spent to build, operate and maintain highways in the U.S., things have changed dramatically.

Due to shifting government spend­ing priorities, Congressional and executive branch gridlock in Wash­ing­ton, D.C., and a slower than expected economic recovery, there has been a steep drop in public in­frastructure spending. Thousands of bridges and miles of roadways need significant attention.

Those who travel the highways around the country today can plainly see the deterioration of our highway and infrastructure systems. Spending is needed, and future spending will ultimately drive construction job growth and OTR tire sales.

The key question is whether the politicians in Washington will agree on a longer-term and viable funding mech­anism to support the investment that is clearly needed. The short-term Highway Trust Fund patch recently pushed through the House and Senate doom us to another year of worry, another year of investment uncertainty, and another year of wondering if a realistic solution can be found.

Current data shows that total high­way construction spending in the U.S. is down $50.32 billion from the same per­iod a year ago. Ultimately, it is likely that it will take both the next two election cycles for politicians to arrive at a reasonable compromise.

Generally, residential investment is key to GDP growth in the U.S. Govern­ment statistics note a turning point in 2011 where an upswing in residential construction provided a boost to GDP in 2012 and 2013. Many economists expect that residential investment, as a percent of GDP, will increase further in 2014, another positive sign for con­struction employment.

GDP growth has been uneven to say the least, and the long-awaited eco­nomic recovery in the U.S. has been both lackluster and protracted.

In June, the International Monetary Fund (IMF) cut its forecast for U.S. economic growth by 0.8% to 2%, based on the harsh 2013-14 winter, continued housing market struggles and weaker international demand for U.S.-produced products.

The IMF maintained next year’s 3% growth outlook, but indicated “that the U.S. must do more to stimulate growth in the near term, while cutting spending in order to avoid public debt overwhelming the country’s finances.”

Construction employment is another key barometer of what to expect in spending increases by the government and private sectors. It also is a fairly good predictor for OTR tire demand, so keep an eye on this measure to see where things are going. It may be one factor to help predict what dealers need to do to prepare for the recovery once it starts to bloom. 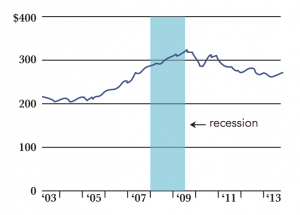 The U.S. Commerce Department shows the public construction spending actually rose during the Great Recession, reflecting government infusion of funds for infrastructure projects. But now that spending has slacked off. (Click to enlarge)

Value added services, profitability and differentiation: Make no mistake about it, if a dealer or manufacturer cannot consistently demonstrate how they are different, and, more import­antly, how they bring quantifiable value to their customers every day they will not survive.

The key question however is ‘Can the dealer/manufacturer do all of this and still be profitable?’ The answer, of course, is that it can be done. Success, however, requires more thoughtful consideration on how to execute.

First, it’s important to eliminate all the clutter. Try to cut out all the non-value added activity. It’s senseless to perform a task because you can or because you always have done it. Take an honest and hard look at everything that you do and ask one simple quest­ion: Does this make a difference to my customer’s business or not? Does it make our customer or us safer, more productive, or more profitable? In the final analysis, if that activity is not doing one of those things, it is probably not creating the differentiation that your customer seeks.

Strategic plans, investment and ROA will mean even more moving forward. Most OTR tire dealers know what it takes to be in this business over the long haul. Positioning your business for long-term success should be the pri­mary focus; it will certainly help get you through a lag period such as the one we are now experiencing.

Now is the time to fine-tune busi­ness strategies to position your deal­ership to thrive in the ultra-competitive tire service/supply environment in the construction and mining segments.

While near-term economic indicators are mixed, the long-term prognosis for the construction and mining industries is strong. The fundamental drivers for growth have not changed and over time we should enjoy a full and robust recovery.

Some of this recovery will be pre­dicated on global demand and events outside of our individual control. Closer to home, there are opportunities to spur investment and infrastructure growth if our politicians can focus more on what’s good for our economy rather than making political points.

Forecasts for GDP growth, while not eye popping, at least give us hope for a continued recovery and better demand for your products and services.

Keep your eye on key indicators like GDP, housing starts, construction spen­ding and construction employ­ment as these will give you a leg up for meeting future demand.

In the final analysis, it seems a safe bet that OTR tire demand will pick up during the next 12-18 months, and pro­bably return to strong growth during the next five years, albeit perhaps not at the super-heated levels of the last real boom.

Take stock in your customer mix, and make it a point to take a deeper dive into the risk factors that come with a shrinking customer base. Take a critical look at what you’re doing today and ask the hard questions about what you should be doing tomorrow to make your customers safer, more productive and more profitable.