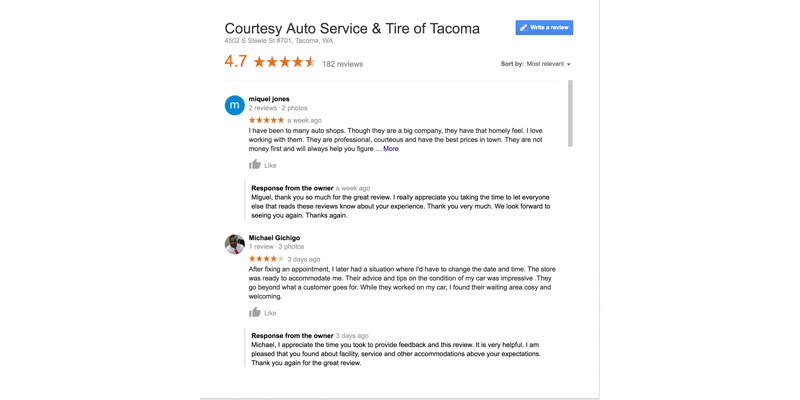 Over the last couple of years, some significant changes in consumer behavior regarding researching retail sources of everything – including auto service – have left some tire dealers behind because they were not paying attention. Luckily, it is easy to catch up.

Over the last couple of years, some significant changes in consumer behavior regarding researching retail sources of everything – including auto service – have left some tire dealers behind because they were not paying attention. Luckily, it is easy to catch up.

When Amazon started this review craze a dozen years ago, they encouraged people who read books they bought on Amazon to critique them. A few loquacious readers, and perhaps wannabe writers, would craft long and involved essays about the books they had read regardless of the reader’s experience. Amazon did not need lots of reviews or professional reviewers to make their strategy work. The gambit drove book sales.

Roll the clock forward and two types of consumer opinion websites developed: sites created specifically for reviews like Yelp and TripAdvisor, and sites created for social expression like Facebook and eventually Google. But because Facebook and Google are almost universally ensconced in consumers’ lives, the last couple of years have allowed them to dominate the market for consumer opinions.

While we all knew Google was growing in importance, the growth was even more dramatic in publishing consumer reviews than we thought. Since 2015, Google’s share of the reviews “market” has grown by over 200% from about 16% in 2015 to 58% in 2017. During that time, Facebook stayed at about 20% share with all of Google’s growth cannibalized from the other players.

The reason for this dramatic shift comes down to simple convenience. A huge percentage of the population has accounts with Google and Facebook. Google predominates because they have so many free, useful tools and services, and you must have a Google account to use them. If you own an Android phone you must have a Google account. Facebook holds its own because “everyone” is on Facebook and millions of people have decided that to be “in the know” they have to participate.

A vast majority of businesses now have a Google My Business page and a Facebook business page. Additionally, because each site makes it so easy to leave reviews, consumers are more inclined to do so.

Google is far and above the No. 1 place people go to research products and services they buy (63% vs. 37% for all other sources combined). Because Google started including reviews in the search results with the other information delivered about the company, it is easy to see why it has exploded in its predominance in delivering consumer reviews. Further, because Google delivers reviews in the search results, it tends to preempt people even going to other sites to read reviews.

This is of significant importance to tire dealers. Google has moved into such a dominant position that to be anything less than fully optimized on Google is a huge wasted opportunity. For tips on how to do this, see the sidebar on the adjacent page.

Is it a Two-Way Street?

As consumers have gained greater access to systems designed to solicit their opinions, they have acquired a tendency to want to be acknowledged. According to a recent survey by ReviewTrackers, over half (54%) expect to have some sort of response from a business about which they have written online. This is even more prevalent when the review is critical of the business. Despite their expectations, 64% say they have never gotten a response from any review they have left, good or bad.

This would suggest an opportunity for tire dealers to break out of the retailer pack and give customers what they expect, but rarely get — engagement. It takes very little time but demonstrates a lot of awareness.

People avoid trouble. Over 94% of people say they will not do business with a company that has credible negative reviews. Yet, they are forgiving. Nearly half (45%) will change their mind if the negative review is accompanied by a response from the business further explaining the circumstances, expressing a sincere interest in doing the right thing and encouraging the disgruntled customer to have further dialogue with them.

On the other side of that coin, there is a subset of people who intentionally look for reviews with one star to see what could possibly go wrong. They also look to see how a business owner responded, if at all.

Reviews are getting more positive. Even though negative experiences will stimulate a review 20% more often than a positive experience, this number has shrunk over the past few years.  Reviews have generally shifted more to the positive as the whole review phenomenon has matured. In 2010, the average star rating for all businesses was 3.8. By 2017, the average star rating had moved up to 4.2.

Reviews are getting shorter. People are making their points more succinctly. In 2010, the average review used about 600 characters. In 2017, the number had shrunk by two-thirds to fewer than 200 characters. This phenomenon is more a function of where people leave reviews than anything else. Earlier reviews were left on desktop computers where time and space encouraged more prose. Today, many reviews are left on a cell phone, making the process of keying in long sentences and multiple paragraphs less convenient.

Consumer opinions used to be limited to the number of people with whom a business could come into contact. Today, one person can speak to thousands instantly. This can be of great benefit to those who understand the game and play it actively. It can also spell disaster for those who ignore the reality that every customer experience is a story, and every consumer can publish.

Columnist and contributor Roger McManus is the author of “Entrepreneurial Insanity in the Tire Industry” (Amazon) directed at the owners of tire and auto service businesses who are trapped as the hub of their business wheel. The book can be ordered at www.TheTireBusiness.biz. He can be contacted via email at [email protected]

Check out the rest of the September digital edition of Tire Review here.﻿

Advertisement
In this article:ensanity, Google