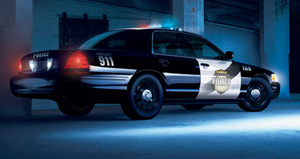 But just as police officers do more than flag down speeders, their high-powered cars “protect and serve” in many other ways. And that means specialized police/pursuit tires.

Being a servicing tire supplier to local or state police doesn’t really take special equipment – regular tire changers, balancers and tire tools will do the job just fine – but it does take building strong relationships with local governments. Buying and servicing police/pursuit tires is a tax-dollar funded expense, so controlling government bodies have to balance tire requirements against available budget money.

And according to experts from Goodyear, Michelin and Bridgestone, today’s tighter government budgets have made it that much tougher for tire dealers to keep that kind of business, let alone break in to become an approved tire and tire service vendor.

Federal, state and local government budget cutbacks – quite drastic in some communities – have sometimes meant reduced police staffing and patrols, which translates into less vehicle mileage and fewer tire sales. While no one wants to see fewer patrol cars on the road, this is the harsh reality in some cities and regions.

“Government agencies continue to provide police protection services, so they continue to run their vehicles,” said Rick Wendt, Goodyear manager of government sales. “While their vehicle usage may be off some due to cutbacks, reductions in personnel, etc., overall the government business has not declined to the extent of the overall economy.”

Another off-shoot of the effects of the economic downturn on local police budgets are state and local governments buying less than optimum tires for patrol cars and other police vehicles.

Police/pursuit tires are specially designed for the particular rigors of service, from effectively carrying the weight of heavy patrol cars to safely managing high pursuit speeds and maneuvers to negotiating “roadways” that would damage standard radials.

Danger Lurks
Fitting standard car tires to modern patrol cars creates a potentially dangerous situation, one that requires the servicing dealer to do a good bit of educating.

“As budgets tighten, law enforcement agency buyers are focused on costs,” said Mike Van Sicklen, Bridgestone Americas’ director of business development. “Remaining price competitive is a key concern. Some agencies have elected to install non-pursuit rated tires on pursuit vehicles in the interest of cost savings. Since these vehicles have special ‘pursuit’ designed suspensions, engines and performance capabilities, we do not recommend installing tires that have not been tested and approved for pursuit vehicles.”

The physical and performance differences between standard consumer tires and specially developed police/pursuit units can be significant, experts say, and safety and performance under often-grueling conditions are top priorities. Therefore, dealers should not recommend non-police tires, nor should they allow their police/pursuit customers to dangerously downgrade their tires.

Just as consumer vehicles have changed over the years, so too have police vehicles, Van Sicklen said. “Today they are faster, more powerful, stop quicker and handle better. Pursuit tires have evolved, as have new pursuit vehicles. This has created new requirements in terms of tire performance.”

Ron Margadonna, senior technical marketing manager for Michelin North America, says some of the changes haven’t been that dramatic. “What we have seen is an increase in speed rating requirement on the vehicle. The Crown Victoria, for example, took a P225/60R16 V tire and now it is P235/55R17 W-rated.”

Goodyear’s Wendt noted that police/pursuit tires are designed specifically for each vehicle application. “The trend has been to larger wheel diameters and lower aspect ratios, much as the rest of the vehicle market,” he says. “This allows for bigger brakes, better brake cooling, and enhanced vehicle performance/handling.”

Police forces themselves are also seeking better tires. According to Bridgestone’s Van Sicklen, “The demands on pursuit tires parallel the demands for consumer tires: better handing in all conditions, longer tread life and lower cost.”

“Most would like to see longer tire life (mileage), but understand that tire handling performance is very important,” says Goodyear’s Wendt. “In these cases, we develop and build tires to OE manufacturer criteria. The OEM sets the performance standards that must be met. We strive to create the best overall package of all tire traits – handling, tire life, wet traction, dry traction, braking, etc.”

And that is not always easy. Consider that 99% of the time, police/pursuit tires aren’t really put to the test. Patrol cars do just that – patrol – driving at lower speeds on paved roadways. So the tires need to deliver the kind of performance a consumer would expect under such conditions – albeit with a considerably heavier car. But when that 1% comes into play, the tires may be rolling at high speeds, making harsh turns and even going off-road. So the tires have to be able to stand up to that level of torture.

Offering a Complete Package
Getting into the police/pursuit tire sales and service arena is not easy. Unlike, say, earning business from a small plumbing contractor fleet or regional trucking company, the process is complicated by the bureaucracy of government and the particular demands those agencies may place on the products and vendor.

Certainly having a good relationship with your tire supplier is key because dealers will face a lot of hurdles, including bids and even tire tests.

The process, says Michelin’s Margadonna, “can be as rigorous as meeting certain state requirements or as simple as being approved on the federal CATL list for pursuit usage. Some departments conduct their own internal tests and evaluations for approval.”

“Dealers must use their personal relationships with their local fleets and continue to serve their needs with new, innovative products and services while finding new ways to help reduce their costs,” says Wendt. “Then the dealer must call on and establish a relationship with his local agencies and be able to provide the needed products and services that each unique agency requires.”

“Dealers have to go to the customer,” says Van Sicklen. “This means approaching the agencies in your markets and applying to have your name on the bidder’s list so that they can be notified of any new bids or contracts.”

As the experts pointed out, service is paramount, but properly servicing police/pursuit tires does not require any special tools or equipment. And that’s a major plus for dealers looking to add sales and profits.

At the same time, the range of possible vehicles expands all of the time. “There are more pursuit offerings today than ever before,” says Van Sicklen of Bridgestone. “Ford, GM and Chrysler all have dedicated pursuit vehicle models. Traditionally, pursuit vehicles are four door sedans, but some agencies require special purpose vehicles like SUVs and 4X4s. Specialty vehicles may have unique sizes and requirements that might result in limited availability of replacement products in some markets.”

That means a dealer needs to know what tires each department will require and then have reliable sources for those tire products.

But besides the variety of vehicles used by law enforcement agencies, “There are no unusual applications or issues,” Goodyear’s Wendt says.

“The vehicle manufacturers work very hard to ensure their vehicles and tires are the absolute best products for the police market.”

At the same time, reminds Van Sicklen, “Because of the higher speeds, cornering demands and elevated miles driven, regular tire inspection and maintenance is critical to both safety and expense control.”

Yes, it is about control – on the streets and on the agency’s bottom line. That takes a lot of hard work by the dealer, but the payoff – in dollars and in being an integral part of your community’s safety forces – can be great.