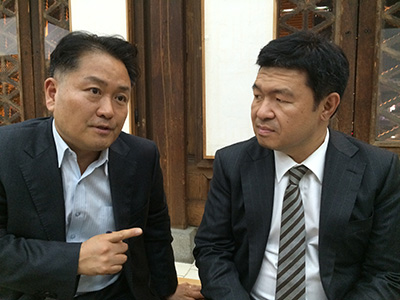 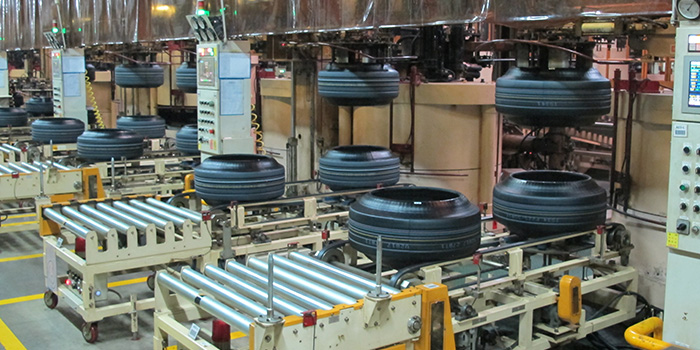 Changnyeong is located in the middle of South Korea’s Youngnam area. The Nakdong River supplies the region with valued fresh water, but it also carries ancient New Stone and Bronze Age relics from the country’s Three Kingdoms period, and Shilla and Koryo dynasties – 57 BC to the mid-1600s.

The river also feeds the 5,550- square-kilometer, 140-million-year-old Woopo Wetlands, home to more than 1,500 species of animals, birds and plants.

It is this culturally significant land upon which Nexen Tire Corp. chose to build a massive 6.57-million-square-foot, fully automated passenger tire facility that primarily services the domestic market. Approximately 10% of the build, though, passes through the nearby Busan port to the replacement markets in the U.S. and Canada.

As Nexen itself says, Changnyeong is a “very good place to live in, where the nature and people are harmoniously existing together.” And while its location is strategic in a business sense and thoroughly modern from corner to corner, it carries the added burden of having to protect such significant natural resources.

Opened in 2012, Nexen’s Changnyeong tire plant may well be the world’s most technologically advanced, and certainly among the greenest. Fully automated from inbound raw materials receiving to its 560,000-tire capacity finished goods warehouse, its takes just 227 workers to keep the plant humming for each of three shifts a day, 351 days out of the year.

Another 175 management and support staff take up space in adjoining offices and around the plant, but as one walks through the facility few humans are visible.

Among the green initiatives at the Nexen’s showcase plant are hundreds of solar panels on the plant roof that combined generate 2.9 megawatts of electricity; hundreds of natural light panels that improve illumination within the plant while significantly reducing energy consumption; automated partitions that shift to evacuate fumes and excess heat, improving the internal environment; solar powered parking lot and street lamps; pollution-free automated electric tow motors that safer than human-controlled equipment; and a on-going push to reach zero waste.

Because there are few nearby residential options, most plant workers and their families live in Nexen apartment buildings near the plant. Buses shuttle workers to and from work each day, and the plant facility includes a health center and fitness center for employees, shower and locker room space, and a co-op sundries store.

As a result of the housing situation, the plant site’s parking lot is unexpectedly small, which reduces storm water runoff and saves energy. 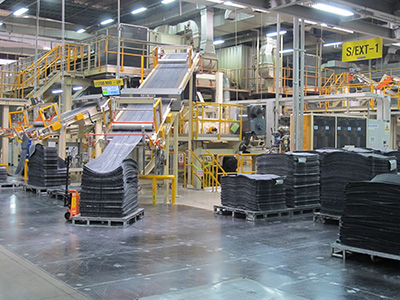 Mixed and sheeted rubber is fed into one of the plant’s calendars, creating miles of body plies and steel belt packages.

U.S. tire media and a pair of representatives from American Tire Distributors checked out the Changnyeong plant and Nexen’s new proving grounds during a late April visit. The hallmark of the trip was a brief walk through of the production facilities, where 14- through 20-inch wheel diameter passenger and light truck/SUV radials are produced.

The one thing you quickly notice is there is no “smell of money” – that familiar, indelible note of raw and cured rubber – testament to the plant’s environmental efforts. Even at nearly three years of age, the plant is incredibly clean, very well lit and disconcertingly quiet. Seven Banbury mixers service the plant. Fully electric robotic trucks route through the facility, carrying in-process components to waiting production equipment or to one of the 24 multi-stage fully automated tire builders, or moving green tires to the curing department.

An overhead system moves finished tires from the 152 curing stations to the final inspection area, where every tire is subjected to a thorough visual inspection, uniformity testing and a dynamic balance check. Random tires are pulled for X-ray inspections. Every tire carries a barcode that pinpoints the production run, the builder and curing press used, and the raw material vendor and batch of every single component in each tire.

Eung-Young Lee, senior vice president and plant manager, is rightly proud of the facility and all that his team has accomplished. When doors opened in 2012 the facility had a 6-million-unit-per-year capacity, which grew rapidly to 11 million tires per year in 2014.

Lee said that planned future expansion will take production up to 21 million in 2018 and, if more land is available, a significant expansion project to nearly double the size of the building could up output to 35 million in 2021.

The impact of the Changnyeong plant was dramatic; Nexen posted total revenues of $1.29 billion in the last full year prior to the plant opening, and watched its sales rise to $1.54 billion for fiscal 2012.

Twenty minutes away, near the city of Daegu, is Nexen’s recently opened Daegu Proving Grounds. It is a massive facility, the first owned by the tiremaker, and is located near the company’s chief technical center in Yangsan. Opened last year, the Daegu facility is integral to Nexen’s OE growth; in fact, several automakers use the facility to conduct vehicle dynamic testing.

Besides the Yangsan technical center, Nexen has R&D facilities in Frankfort, Germany; Qingdao, China; and Richfield, Ohio, near Akron. Those facilities are supported by 17 technical offices around the world.

Yangsan is also Nexen’s home base, and while it maintains its sales offices in Seoul, its headquarters are a plane trip away from South Korea’s largest city.

Heung-A Tire continued as a parochial bias tire producer until 1985 when it opened its first radial tire plant, located at its Yangsan home base. Fifteen years later, the company changed its name to the more forward-looking Nexen (a mash up of “next” and “generation”)

The Yangsan plant produces some 55,000 tires per day, 18 million per year. In 2006, Nexen added a plant in Qingdao, China, which currently has the capacity to turn out 13 million units per year. All told, Nexen can produce 42 million consumer tires per year; Nexen does not compete in commercial tire segments.

Work has started on the tiremaker’s first European plant, a $1.1 billion project in Zatec, Czech Republic, that is slated to come on stream in 2017 with an initial annual capacity of 3 million tires. That production will be focused entirely on servicing European market customers, freeing capacity at Nexen’s home country plants to feed its North American growth plans.

Europe is Nexen’s largest market at 9 million units, followed by the U.S. and then its home South Korean market at 3.4 million tires.

“OE is going forward, our quality is good compared to Tier 1 OE providers,” said Kang. “But the consumer has to know about our quality and our brand.”

The company devotes 2.8% of sales to its R&D activities, a higher stake than all but three global tiremakers. “R&D means quality, and quality means everything to Nexen,” noted Kang. The U.S. technical center in Ohio is “very vital to our long-term plans. We need to get more technical know-how from Akron.”

But perhaps the most important element to Nexen’s future growth potential lies in brand awareness, he noted. “Consumer perception of our products must continue to rise,” Kang stated.

“The U.S. is a very practical market,” Kang said. “Nexen quality is high and the price is very reasonable, and we will spend more marketing money on brand image and awareness.”

Kang said that Nexen is eying North America for its next tire plant, but the conditions have “to be right.” Brand awareness must improve, he said, and replacement sales will have to reach 8 million units-plus on a consistent basis. Based on current RMA data and Tire Review estimates, that means a marketshare jump from just under 2% to around 3.5%.

With the new European plant coming soon, “supply is absolutely not a problem,” for Nexen Tire America, according to marketing director Kyle Roberts. “There is definitely room to grow.” Getting there will take extensive dealer education, getting the Nexen message out by helping dealers grow because of Nexen.

Last fall, Nexen used the SEMA Show/Global Tire Expo to launch its Next Level dealer program, offering cash rewards and various incentives. The centerpiece for this year is a $1 million quarterly giveaway, where dealers can increases their chance to win based on purchase levels.

This year, Nexen is passing on SEMA/GTE, and is applying the savings to a holding dozens of Dealer Partner Days, hoping to reach some 3,500 dealers with focused events held in major metro areas.

“We feel that there’s so much work that can be done with our current customer base, to grow their sales, that we really want to start there,” Roberts said in an interview with Tire Review.

“So, when we have the dealer that is purchasing 40 or 50 tires a year or using us as fill-in, we feel we can educate that customer and get them to start buying 200 or 300 units a year. We’re looking at 300%-400% growth with existing customer base possibilities just by reaching them and educating them on what we are, who we are, and giving them the tools to sell our product.”

Besides pricing and quality, as noted by Kang, Roberts sees Nexen’s OE fitments as a key tool. “Our OE story is about growing brand awareness and how we’re putting 2 million tires on the road in the U.S. right now, and that number’s growing every month. That growth is going to require more replacement business, so they should feel comfortable stocking our products so that they can fill the replacement demand. The more OE products we sell, the more brand awareness we will have with the consumer.”

In other words, mutual growth will come from the tiremaker and its distribution harmoniously progressing together, just as Nexen has reached harmony with the people and nature of Changnyeong.