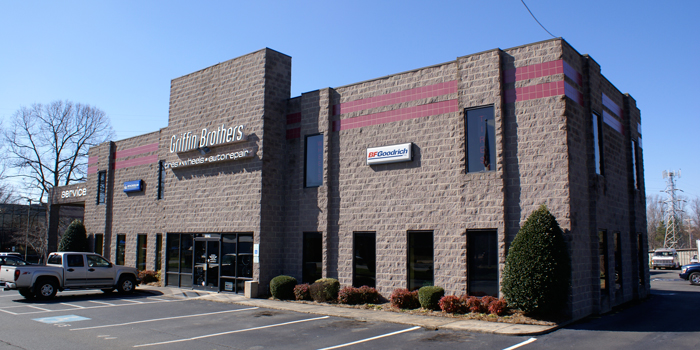 You would expect tire dealers in the heart of NASCAR country to know something about automobiles. Griffin Brothers Tires, Wheels, and Auto Repair in the Charlotte, N.C., area not only knows tires, but the company also has mastered the art of building relationships with people.

Over the past 48 years, this family-run company has built a solid reputation with their customers – to the tune of more than $13 million in total gross sales in 2008. With the motto “Family Owned, Customer Driven,” Griffin Brothers has made customer service one of the most important parts of its business. And that was a key reason why Griffin Brothers was named a 2009 Tire Review Top Shop Award Finalist.

“To me, it was easy,” says Larry Griffin Jr., one of the three owners of Griffin Brothers. “Customer service is what it was all about. Price is important, but I want to go to a place where they know your name and treat you like family.”

From making an effort to know and use the first names of their customers – along with maintaining notes about the vehicles their customers drive, their likes and dislikes, and even the names of their children and pets – Griffin Brothers continues to build relationships with their patrons in a variety of ways. Customer appreciation weeks are held every fall, complete with giveaways, promotions, and free hot dogs. Women’s car care clinics are held in April during National Car Care Awareness Month. And Christmas cards with coupons are sent to the company’s 1,000 best customers each December.

If a customer decides not to wait at the service location, Griffin Brothers will text or e-mail a customer when his or her vehicle is ready for pick up. The business also offers a complimentary shuttle service.

Patrons find postage-paid customer service surveys hanging on their rearview mirrors when they pick up their vehicles. Griffin Brothers takes its customer feedback very seriously, with each survey being read by vice president Griffin Jr. and general manager Russ Carter.

“It’s amazing … nine out of 10 take the time to write comments,” Griffin Jr. says. “If a store has an issue, it will flesh itself out in the surveys. They gauge how you’re doing.”

In addition to customer surveys, Griffin Brothers conducts phone and e-mail assessments along with videotaped, in-person mystery shopper assignments at each of the seven store locations. Once a mystery shopper’s perspective is reported, Carter reviews the evaluations with staff members.

Griffin Brothers also aggressively pursues corporate customers. They’ve instituted a corporate discount program where employees of participating companies can receive $25 in store credit during their first visit and a 5% discount on all other visits. 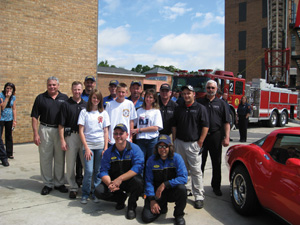 Aside from a devoted focus on customer service, Griffin Brothers maintains its customer base – and attracts new customers – through a wide variety of techniques.

Newsletters are sent to more than 30,000 customers three times a year. Griffin Brothers seeks to inform customers about new technologies and trends in tires while bringing current store promotions to light and passing along discount coupons. A Griffin Brothers e-mail club also has been established, where customers can receive updates and coupons.

In the past, the dealership’s direct mail campaigns have targeted 100,000 potential customers who live within a five- to seven-mile radius of each of the seven stores.

Other marketing campaigns include two digital billboards – one in Charlotte and one in Concord across from Lowe’s Motor Speedway – and television commercials that are both educational and promotional. For example, a recent commercial focused on the 1975 Magnuson-Moss Warranty Act that enables customers to get automotive services at independent shops like Griffin Brothers and keep their warranties intact.

Like communicating with customers through texts and e-mails and instituting the first POP key tags, the staff at Griffin Brothers attempts to stay current with technological trends. The Griffin Brothers’ Web site – griffinbrothers.com – includes online appointment scheduling, a tire price quote, and a question and answer section for customers.

While Griffin Brothers interacts with customers in technologically advanced ways, the company’s management team also keeps their staff of 104 full-time and 11 part-time employees up-to-date with the latest technology in the industry. Since the company’s sales mix includes 35% tires and 65% vehicle service – with 100% of sales coming from retail – it’s vital for the company to stay on top of current trends.

Griffin Jr. says that customers and employees are the most important part of his business. Just like the company has a devoted commitment to customer service, maintaining close staff relationships is a vital aspect of the Griffin Brothers business. 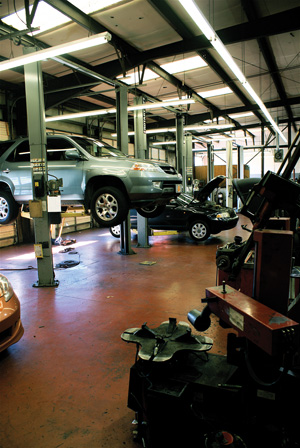 Griffin Brothers offers employees both paid vacation and comprehensive benefits. The company also gives employees an option to participate in a Christmas Club: employees who contribute $10 a week receive a 50% company match.  Each November, a participating employee can expect a bonus check of more than $750. According to Griffin Jr., 95% of his employees participate in the program.

Individual store managers communicate with Carter, the general manager, several times a day, and both sales and manager meetings are held monthly. Each store is encouraged to increase sales with the incentive of monthly company-wide competitions; at each month’s sales meeting, a winning store is announced and awarded a free lunch with vice president Griffin Jr.

Store managers competed in 2008 and 2009 for a prize of a six-day, five-night cruise to the Western Caribbean or a four-day, three-night vacation at a luxury resort in Cancun, Mexico. Initially, the company sent invitations to the managers’ wives. “If we could get the wives bought in, we could get the guys, too,” Griffin Jr. quips.

Griffin Brothers has had a lot of time to perfect customer and employee relations. Larry Griffin Sr. purchased Honest Tire in Charlotte from his uncle in 1961, then changed the business name to Griffin Brothers Tire Sales when his brother Ronnie joined him. The brothers ran the one-bay shop until they split the business in the 1980s, and Larry Sr. kept the company name. Additional growth started in 1991 with a second location, and the company continued to expand to seven locations by 2006.

Currently, the company is owned by Larry Griffin Sr. and sons Larry Jr. and Mike. In some cases, it’s been a lifelong family affair, as Griffin Jr. explains, “The company was started by my father the year before I was born.”

For Griffin Jr., the reason for the growth is simple: “Good employees. Good people.”

Griffin Brothers is a member of the North Carolina Tire Dealers and Retreaders Association – in fact, Larry Jr. is the president-elect. The company is also part of the NASCAR Performance Network, a national organization of repair shops, body shops, and parts stores that are members of the Automotive Service Association. Griffin Brothers also is a member of Tri-State Delta, American Car Care Centers, Goodyear G3X, and the business is a Continental Gold Dealer.

Locally, Griffin Brothers has gone a lot further than just being members of the Charlotte region’s Better Business Bureau and chambers of commerce. They’ve established themselves as members of their communities by supporting a variety of organizations. Griffin Brothers is the official tire and automotive service provider of the Charlotte Checkers, a professional hockey team, as well as the University of North Carolina at Charlotte 49ers. The company also is involved in the seven stores’ communities by supporting athletic and music programs at local high schools. 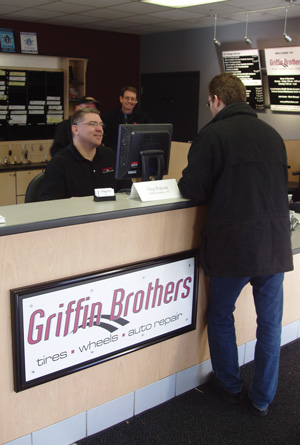 Griffin Brothers assisted battered women by supporting Dove House, a local charity, and they helped build a Habitat for Humanity home. The company also partners with the Ada Jenkins Center, an organization that provides much-needed educational, family, and health services for local citizens.

The company has helped area youth through the Uniroyal soccer program, the Young Life Golf Tournament, and the First Tee Program of Lake Norman. For five years in a row, Griffin Brothers also organized and sponsored a pro am golf tournament benefiting a local D.A.R.E. chapter. Later this month, Griffin Brothers will host the first Chip’n for Children Golf Tournament – all proceeds will benefit the Children’s Miracle Network and Levine Children’s Hospital.

In 2008, Griffin Brothers partnered with NASCAR and the NASCAR Performance Network in an episode of “NASCAR Angels.” Hosted by NAS­CAR driver Rusty Wallace and former Miss Winston Cup Shannon Wiseman, the episode – a cross between “Extreme Makeover” and “Pimp My Ride” – focused on Victor Isler Jr. of Salisbury, N.C.

While Vic Sr. never had the chance to finish the 1979 Corvette for his son’s birthday, “NASCAR Angels” did complete all the repairs on the dream car – upping the car’s value to about $30,000 – with the help of Griffin Brothers.

Griffin Jr. credits his staff for doing all the work to make the television show’s dream become a reality. “My General Manager Russ Carter really deserves all the credit. He dealt with the vendors and got it all done. Our technicians volunteered their time. A technician from each store was part of the project and did a different job.”

On the day of the restored car’s reveal, Kevin Harvick, one of the Isler family’s favorite NASCAR drivers, drove the fire engine red Corvette to Vic Jr. at the Salisbury Fire Station. Vic Jr. was surprised by his “new” car – and the fact that one of his favorite drivers was delivering it. The car was almost entirely replaced, complete with new tires, a new engine, and a new interior. Wallace estimated the car could now drive around 200 mph.

Thanks to Griffin Brothers and their commitment to people, the “NASCAR Angels” episode demonstrated exactly how much their staff members care for others.