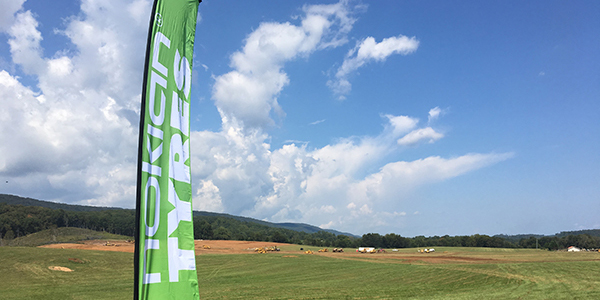 “It’s a big investment for us,” said Hille Korhonen, CEO of Nokian Tyres in an interview with Tire Review. “It’s a big commitment to serve our North American customers. As I said, we plan to double our sales [in the next five years]. It means for our customers that they will sell products made in America and [the new facility] will give us more flexibility to get them our products faster.”

During the ceremony, Korhonen reaffirmed the company’s ambition to doubling sales in the next five years within North America. She also highlighted Nokian Tyres’ goal to lead the tire industry in sustainable manufacturing as well as making sure the company is the employer of choice within the greater communities it serves.

“We have worked hard to create the best possible environment for job creation, which helped attract Nokian Tyres to Tennessee,” Gov. Bill Haslam said. “It’s exciting to officially break ground today on the company’s new manufacturing facility in Dayton that will create hundreds of jobs for Rhea County.”

With production launching in 2020, the new plant will service customers across the United States and Canada, concentrating on the production of North American-specific car and light truck all-season tires. The Tennessee location will increase production and warehouse capacity, allowing Nokian Tyres to meet the increasing demand throughout North America.

The new plant will be capable of producing four million tires annually with the room for expansion to meet future demand. The site will also house a distribution facility with a storage capacity of 600,000 tires. The facility will also provide up to 400 new jobs in the Rhea County community.

The announcement marks another step forward for Finland-based Nokian Tyres in North America, as the manufacturer continues to lay the foundation for growth through investments in its people, products, customers, marketing, and logistics.

Korhonen was recently appointed CEO and president of Nokian Tyres, serving in this role since June 1, 2017. When asked what she hopes tire dealers across North America understand regarding the Nokian brand, Korhonen replied, “We are the premium tire manufacturer from Scandinavia and we have huge experience in winter tires; however, we are using that experience to create tires for North America. Our goal for the coming year is that we want to make our customers as happy and satisfied as they are today and we want them to have more opportunities to make more money with Nokian Tires.”

The celebration concluded with a formal dinner event for dealers, distributors and Nokian Tyre leadership at the Hunter Museum of American Art in downtown Chattanooga.

Designing for the Future

The morning following the groundbreaking, the Nokian team introduced its new the Nokian eNTYRE C/S  all-season tire designed to meet the needs of the growing CUV and SUV product category.  The new tire is designed specifically for the North American marketplace.

Currently in production, it will be available to dealers across the U.S. and Canada in early 2018.

The new eNTYRE C/S is designed to balance performance with durability, passenger comfort and safety, to perform predictably and safely regardless of driving conditions or outside temperatures. In addition to dry, wet and wintery road conditions, it also handles potholes, berms and uneven pavement. Sidewalls are reinforced and strengthened with cut aramid fibers, providing durability and puncture resistance to protect against damage and blowouts. Rubber compounds include the same carbon black as the company’s OTR and Rockproof tires, providing protection against cutting and chipping on rough road surfaces.

When sampling the tires on actual highways, side roads and unpaved gravel trails as part of a scavenger-hunt-themed on-road test, in addition to strong handling and responsiveness, the tires were surprisingly quiet.

With passenger comfort a priority in its design, the Nokian eNTYRE C/S includes noise-reduction innovations. Among them is the “silent groove design” which uses circular dimples, much like the surface of a golf ball, along the walls of the longitudinal center rib to control air flow. These indentations minimize the sounds made by the edges of the traverse grooves reducing any howling noise from the tires on pavement. In addition, the sidewall has silencing technology to reduce noise and vibration from the tread surface.

“Clinch rubber compound” is also used on the sidewall which increases the flexibility of the product against the wheel flange, providing the bead area with more durability while reducing interior rolling noise, so sound is not transferred through the wheels and into the passenger cabin.

When asked what he was most proud of regarding the tire’s design, Matti Morri of Finland, manager of technical customer service with Nokian said, “I think I’m most proud of the good compromise between the safety features and comfort, and how [the eNTYRE C/S] does so well with wet handling and wet braking – that is very important. We also have a very strong construction, triple steel belts, and very strong construction of the sidewall, as well as the compounds we used.”

According to the company, the tire’s tread pattern is designed to perform in all seasons and has four main grooves connected with lateral sipes, ensuring water and slush speed away from under the car. The main grooves’ high-polish finish makes them usher water away even better, efficiently resisting hydroplaning while enhancing the tire’s styling. There are also soft soil and snow grip enhancers for mud or snow conditions. The main grooves are also deeper than usual resulting in improved mileage.

“The Nokian eNTYRE C/S was developed specifically for North America where drivers want a safe-riding tire that performs year-round,” said Tommi Heinonen, head of Nokian Tyres North America. “Widening our selection of all-season products is a direct result of our North American investment strategy and yet another example of Nokian Tyres’ continued commitment to customers in the U.S. and Canada.”