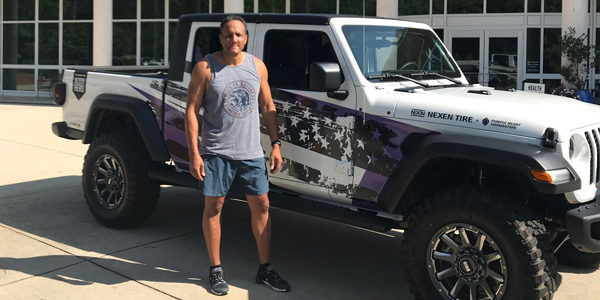 Retired Army Master Sgt. Brian Porter, Purple Heart recipient, says that being the recipient of the Nexen Hero Jeep Gladiator on national TV Aug. 7 made him a local celebrity and allowed him to continue sharing his story.

Since returning to his home near Fort Bragg, N.C., retired Army Master Sgt. Brian Porter, Purple Heart recipient, has quickly learned that being the recipient of the Nexen Hero Jeep Gladiator on national TV Aug. 7 would make him a local celebrity and allow him to continue sharing his story while motivating people with his recovery efforts, Nexen Tire says.

More than 1,000 Purple Heart recipients were nominated in the second iteration of the Nexen Hero program, an initiative by Nexen Tire America and the Purple Heart Foundation to give a custom vehicle to a deserving Purple Heart recipient. Porter, who retired after 26-and-a-half years on active duty, began his career in mechanized infantry and later joined the Rangers, eventually volunteering for the elite 75th Ranger Regiment and earning the U.S. Army’s Green Beret. He finished his career at the U.S. Army Special Operations Forces Command at Fort Bragg, serving almost 10 years after the blast an improvised explosive device (IED) nearly took his life.

Deployed to Iraq, Porter was hit by an IED in January 2004 and walked away with minimal injuries. However, two months later, he was hit with the full force of another IED that caused extensive damage to his face and body. After being medically evacuated back to the United States, Porter endured 34 different surgeries to his face and body including plastic reconstructive and eye surgery, skin grafts and extensive dental reconstructive procedures. Porter’s 35th surgery is scheduled for later this year and there could be more.

After just three and a half years healing and rehabilitation, he went back to Iraq for two more deployments, both without incident.

Since receiving the vehicle in August, Porter said he gets noticed everywhere and is constantly getting waved to and “thumbs up” signs when driving his Gladiator.

“I’m never afraid of telling people what happened to me 15 years ago, and sometimes it motivates these people when they hear my story,” said Porter. “The vehicle, being on TV and everything else that’s happened, has been great because it’s allowed me to help others and remind folks what the Purple Heart is all about.”

In addition to thanking his friend and exercise planner, Tim Toomey, for the nomination, Porter says none of this would have been possible without the support from his wife Shawn and children Brian and Bailee.

“I like to talk about my wife and my kids. My daughter was three and my son was six when this occurred, and my family was there the entire time. My wife answered the door when the Army told her what happened 15 years ago. She immediately had to ‘man up.’ She was there when I was in the hospital, when I had a tracheotomy in my throat – tubes, cables, heart rate monitors all connected to me – she’s been there from day one. She’s really the ‘hero behind the hero.’”

Porter said he has never owned a Jeep before and plans on taking it into the Uwharrie National Forest near his home to try out the off-road capabilities of the Jeep Gladiator and experience his new 35-inch Nexen Roadian MTX Xtreme off-road tires. The Nexen Hero Jeep Gladiator will also be featured in the Fayetteville Veteran’s Day parade Nov. 9 where Porter is being honored as the grand marshal.