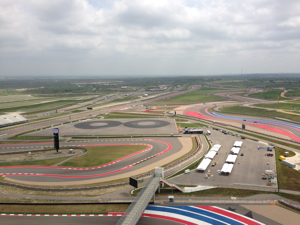 Bridgestone Americas released its DriveGuard tire line to media and dealers at a ride and drive event in Austin, Texas, at the Circuit of the Americas in early April.

The tiremaker introduced its first run-flat tire in the ear

Bridgestone’s DriveGuard ride and drive event took place at the Circuit of the America’s track in Texas.

ly 1980s. The tires were never marketed as a safety feature; rather they were touted for vehicles where space was a premium as run-flats eliminated the need for a spare.

The firm ride comes from key components inside the tire that differentiate it from conventional tires. Side-­ wall-reinforcing rubber ensures that the run-flat can support the vehicle’s weight and load at zero pressure. To prevent a tire from separating from the wheel when tire pressure is lost, run-flat tires utilize a specially designed bead and must use a heftier bead filler to combat heat when driving on a flat.

A firm ride was never a problem for drivers of performance cars where a firm ride is expected. The “don’t-be-stranded” quality of these tires seemed like a strong selling point to the general consumer, but first generation run-flat tires could never get past their tendency to be a very uncomfortable ride for the everyday consumer.

At the event, the tiremaker unveiled its next generation of the run-flat tire, DriveGuard, designed for sedans, coupes and wagons with TPMS in the U.S. and Canada.

“Continue Your Journey” is the tagline for DriveGuard, and Bridgestone believes this product aligns with its customers’ active lifestyles. “There’s never a good time for a flat tire,” explained Saul. “Even if a flat tire strikes, drivers are empowered to keep moving. They can avoid the immediate burden and circumstances, and choose when and where to have their tire repaired or replaced.”

Position In The Market
Saul told the media durin 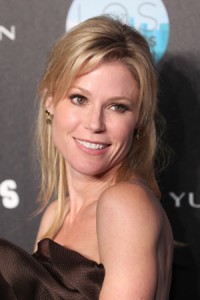 Actress Julie Bowen will be the brand’s spokesperson.

g his introduction of DriveGuard that the company wanted to give the “safety segment” a product they could put their trust in. This particular segment, according to Bridgestone, constitutes one in four consumers, of which 88% said they were likely or very likely to purchase DriveGuard in surveys conducted by Bridgestone.

DriveGuard targets more than just the safety-conscious consumer, the tiremaker said. At the event were several media outlets facing female consumers. Bridgestone pointed out that 50% of all tire buyers are female – a segment Bridgestone dubs “Female CEO – Head of Household.”

“Female CEO/Head of Household is a phenomena that most consumer product companies are experiencing,” said Paul Oakley, vice president of communications. “The financial decisions in the household traditionally were relegated to the working father but there has been a migration to the purse strings being watched by the mother.

“That mother may be stay-at-home with an equally important job of raising kids and keeping the house under control or she may be doing double-duty being a mother and having a professional career,” explained Oakley.

For that reason, DriveGuard has enlisted actress Julie Bowen, known for her role as Claire Dunphy in Modern Family and a real-life mother of three, to be the brand’s spokesperson.

Bridgestone’s vice president of consumer marketing Erik Siedel said that choosing Bowen as the spokesperson will help the brand appeal to the female head of household’s lifestyle. A preview of the TV spots featuring Bowen shows the actress running late to her son’s appointment when she runs over a row of nails. A Bridgestone engineer reassures her that with DriveGuard she can drive for 50 miles up to 50 mph to make the appointment. The commercial is light and humorous – you won’t see the tiremaker using fear tactics in this campaign.

“We won’t focus on the negative, everything about this is focused on positives,” said Siedel, claiming that this sets Bridgestone apart from its competitors’ marketing.

DriveGuard’s consumer advertising is highly targeted for the female segment, and will appear in print, television, digital and radio during events where the female audience would not expect to see a tire advertisement, claimed Siedel. He name-dropped TV show Nashville and The Bachelorette, network HGTV, as well as publications Better Homes and Gardens, Redbook, O The Oprah Magazine and Woman’s Day.

“DriveGuard is not just for women, though,” said Oakley. “It’s certainly a unique approach that we’re taking in our marketing efforts, but there’s as many men who will find all of the same benefits of their active lifestyles.”

For that reason, Bridgestone has also recruited tennis player John McEnroe, golfer David Feherty and NFL player Terrance “Pot Roast” Knighton to help with its marketing efforts. Bridgestone is also providing stores with interactive POS resources and in-store demos. Siedel pointed out that 70% of consumers make the decision to purchase while in a store and that’s why these materials are especially important.

Lastly, Siedel announced that this is Bridgestone’s largest investment in marketing for a product launch. That campaign was expected to be in full force by May 15.

“The sidewalls are where the magic is happening,” explained Saul. “Cooling fins on the exterior and NanoPro-Tech sidewalls work together to resist heat and support vehicle weight at zero pressure.” 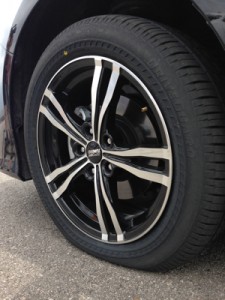 The tire is lighter than traditional run-flats and features an optimized footprint that distributes weight evenly, the tiremaker claimed. DriveGuard features a silica-rich, asymmetrical tread pattern that works in all seasons and is made of the same tread compound as Bridgestone’s Serenity Plus product.

Bridgestone allowed media and dealers to test the tire against the tiremaker’s premium touring tire, the Turanza Serenity Plus, in both wet and dry conditions. In zero pressure situations, DriveGuard can safely reach speeds of 50 mph for up to 50 miles, Bridgestone said.

“We’re really glad to hear during testing that drivers can tell when DriveGuard is at zero pressure,” remarked Jamie McNutt, Bridgestone’s manager of tire development and engineering. “There was concern that drivers would not take the product in to be serviced if they couldn’t tell the difference.”

Not only could drivers tell the difference in handling, but they could also hear and see the difference. Drivers will hear a sound typically associated with running a flat once the tire reaches zero pressure. Drive can also see that the tire is at zero pressure by visually inspecting the tire and checking the vehicle’s TPMS. The tire can only be installed on vehicles with TPMS.

Specifications
According to Bridgestone, DriveGuard covers two-thirds of new pass­enger cars equipped with TPMS and will be available in 32 sizes for 15- to 19-inch wheel diameters for speed rating H, V and W. Bridgestone’s image fitments for the tire include the Toyota Camry, Honda Accord, Ford Fusion, Honda Civic, VW Jetta and Nissan Altima.

Bridgestone only offers the product in sizes for coupes, sedans and stationwagons, but expects to release more sizes over the course of the next year or years for CUVs. SUV sizes will come, but according to McNutt, the technology is not yet developed and tested.

“I think we have found a very sweet spot. DriveGuard is a good value proposition for the consumer when it comes to performance, cost and the assurance of minimized headache as it relates to a flat tire. DriveGuard seems to be hitting on all the right cylinders. We think we have a winning product here,” concluded Oakley.

Advertisement
In this article:Bridgestone, DriveGuard, run-flat