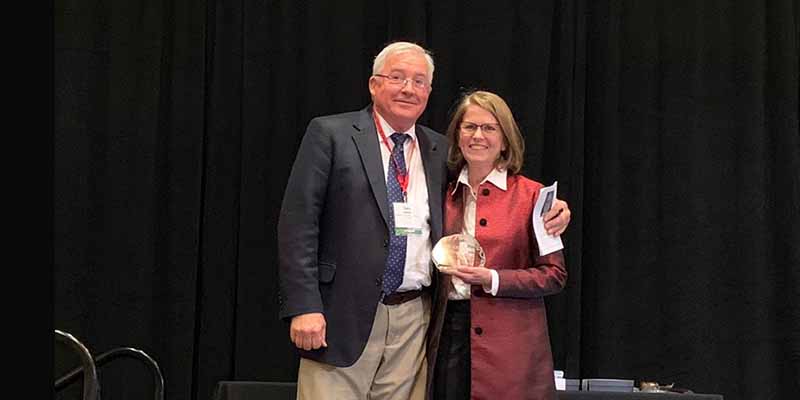 A highlight of the Awards Night event was the celebration of NCTDA honorees, individuals that make a true difference in the tire industry in the state.

Gary Baldree, owner of Baldree’s Tire Pros, was honored as the 2019 Dealer of the Year, shown here with Becky Hester of NCTDA.

While many industry groups struggle with declining numbers and a lack of participation, North Carolina is experiencing fresh momentum. Long-term initiatives, such as working with state vocational schools to introduce tire training into the curriculum, are now coming to fruition. As change and consolidation is introduced into the industry nationally, the North Carolina state association, under the direction of Reece Hester with the strong support of Becky Hester, is keeping its members engaged and taking a proactive approach to support those in the industry in its region.

The most recent North Carolina Tire Dealers Association annual conference in early March was positive proof. With 260 registrants for the 2019 Expo & Trade Show dealer conference, attendance was up 30% over 2018, as was workshop participation. Kicking off the event in a crowded ballroom in the heart of Raleigh, North Carolina, dozens of tire dealers, their team members and families gathered for the NCTDA Awards Night on March 8, followed by a day of training and ideas at the NCTDA 2019 Expo & Trade Show. 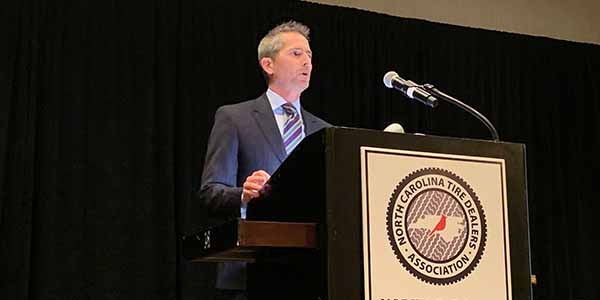 Announced at the event, one of the initiatives the association has to address the technician shortage in the state is a new partnership between the NCTDA, the Tire Industry Association (TIA) and tech schools across the state to introduce TIA training into community college and vocational school curriculums. 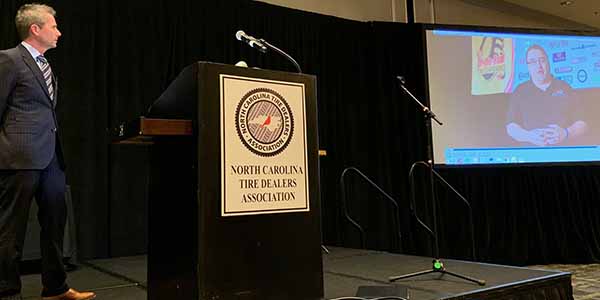 Kevin Rohlwing, senior vice president of training for the Tire Industry Association, shares details of the new training initiative within North Carolina to the audience as Frankie Pugh looks on.

NCTDA also recognized those rotating off the board for their service including Hank Phillips of Avery Tire Pros and Richard Leicht, former owner of Atlantic Avenue Tire and Service (AATS) who recently sold to his business to Chapel Hill Tire & Car Care. Leicht thanked friends and family in the audience and shared his retirement plans of soon relocating to Costa Rica. Joining the board as vice president is Leicht’s friend and new owner of the former AATS, Marc Pons of Chapel Hill Tire, Tire Review Top Shop winner.

A highlight of the Awards Night event was the celebration of NCTDA honorees, individuals that make a true difference in the tire industry in the state.

Gary Baldree, owner of Baldree’s Tire Pros, was honored as the NCTDA 2019 Dealer of the Year. After a lifetime in the business with his father and family in a service-station-turned-tire store, Baldree and his brother realized in 2001 that the needed to expand their business footprint from their location in New Bern, North Carolina. So, the brothers decided to separate their businesses. Baldree opened a store in nearby Havelock and became a Tire Pros dealer in 2003. He and his son, Howard, have earned the respect of their customers and industry friends alike. Thanks to his warm personality and willingness to serve others, Baldree has has made a strong contribution to the industry and to his local community.

Bob Smith was inducted into the NCTDA Hall of Fame. After graduating from college, he married his sweetheart, Bobbie Rigsbee in 1958 and joined her family’s tire business, Rigsbee Tire Sales in Durham. A year later, he was drafted into the Army where he served for two years before returning to Durham. (He also continued his service in the U.S. Army Reserves until 1986 when he retired as a Command Sergeant Major, the highest rank for enlisted personnel.) Back at the tire business, he assumed the management of the wholesale division of Rigsbee Tire Sales and worked with others in the family to grow the business. During that time, Smith served on the NC Tire Dealers & Retreaders Association as an active board member, then as president in 1982. He also served on the Hercules Tire & Rubber Dealer Council, the Toyo Tire Dealer Council and the National Tire Dealers and Retreaders Association, the forebear of today’s TIA. When the family business sold to Merchants Tire in 1983, Smith transitioned into a role as executive vice president of the NCTDA with Bobbie at his side, further strengthening the organization and its board. He also added more educational opportunities, gave a stronger legislative voice to tire dealers and constantly looked to increase value-driven benefits for members. He retired in 2005 and now resides in Wake Forest.

Friend of the Industry Award

The oldest son of a father who owned a service station, Don Phillips learned at a young age how to work hard and take care of customers. His decision to leave the family business in 1966 started a long career of service to tire dealers, including roles with Long Mile Rubber Company, Goodyear Tire & Rubber Co., Ultima Rubber, Target Tire and now Southeastern Wholesale Tire where he continues to work in outside sales today.