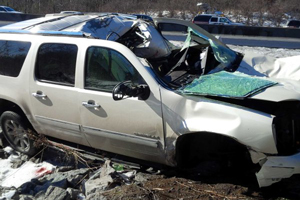 I cannot recall a single week in recent years that I’ve not read these and similar headlines from newspaper and radio/TV websites across the U.S. and Canada. And the sad thing is that the ones that make the news represent only a fraction of wheel incidents during any given time period.

Wheel offs are happening all too often.

The 69-year-old man killed on Highway 400 near Toronto died Jan. 27 when a set of duals departed a Class 8 tractor-trailer, bounded across to the southbound side and crushed his GMC Yukon (see photo 1 from 680News reporter Kevin Misener). The fact the man lived long enough to be life-flighted to a nearby hospital in itself was a miracle.

The driver of the rig finally stopped about a kilometer and a half later, noticing that his rig was two wheels short of the required 18. The wheel end told the story: all of the lugs had sheared off, turning the massive tire/wheel assembly loose on unsuspecting drivers (see photo 2 from 680News reporter Kevin Misener). 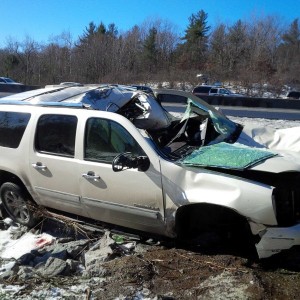 Mr. Misener did a little extra homework in his story, discovering that in 2015 there had been “82 cases of ‘separated’ wheels on Ontario highways. Although those numbers are high, they were much higher in 1997 at 215.”

But I’m pretty sure that poor man, a beloved grandfather, wasn’t concerned about stats when those two radials and heavy steel wheels came looking for him. 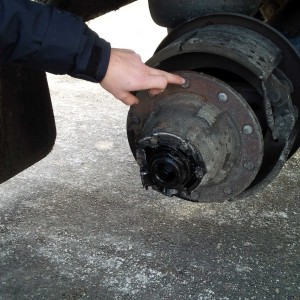 A day earlier, in Lexington, Mass., a 26-year-old was killed on Route 128 when the left rear tire/wheel assembly separated from a Ram pickup truck traveling in the opposite direction. The weaponized tire/wheel bounced across the median and struck the driver’s compartment square, instantly killing the young man with a bright future.

The 19-year-old woman driving the pickup was unhurt but terribly shaken. So was the 50-year-old driver of a Toyota Highlander that was also struck by the escaped tire/wheel assembly. They will never escape that day.

In an industry that faces so many challenges, tragic wheel-offs should not be among them. No doubt, there will always be vehicles – large and small – that are (to be kind) horribly maintained. I’ve spoken to many experts who have told me that unattended rust will cripple a wheel stud, one of the most stressed pieces of metal on any vehicle. Tire dealers and fleet maintenance personal (many, many of these wheel offs involve large trucks) should be alert to that problem with every vehicle that passes through their bays.

But the other part is far more controllable. How many of you have a specific system in place where each and every mounted tire/wheel assembly is double-checked? By a different tech in your shop? And both sign off on the work order?

I suggest that next week every dealer reading this should take the time to meet with your team and review all of your wheel-off prevention processes, improve those protocols and set in place the means to constantly monitor techs to assure they are doing the job the right way.

We cannot solve every wheel off, but since we deal extensively with tires and wheels and wheel ends, we can certainly make a dent in those very unfortunate statistics.

I find British (and Canadian) humor to be completely hilarious. From the countless standups to shows like Beyond the Fringe and Monty Python’s Flying Circus and Mr. Bean and the Royal Canadian Air Farce and SCTV, the boundless joy I’ve enjoyed because of them has no peer.

But sometimes, I’ll admit, I find myself stuck between wanting to laugh my fanny off or stare dumfounded into space.

“While some of the bugbears that British drivers hate will disappear (because of autonomous cars), whole new problems will emerge that will leave helpless passengers seething in their automated vehicles.”

“Driverless cars are built on logic and the passionless scanning of the road ahead by a computer,” said Flexed.co.uk ‘s Mark Hall. “It’s going to be all function and no discretion, with no nipping out of road junctions before that chap towing a caravan doing 25 mph. Speaking as a British driver, can you imagine the boredom?”

Flexed.co even offered predictions on what will happen “as soon as driverless cars become commonplace on British roads,” some of which “will be uniquely British, while others could happen worldwide.”

Again, this may all be tongue in cheekiness…

• Sitting and watching other drivers watching films, playing video games or having fun, when you’ve forgotten to bring something interesting to pass the time.

• Mini roundabouts. We all know what happens when three cars get to a mini roundabout all wanting to turn right – British politeness sets in and you could be there until tea-time waiting for someone to go first. Robot cars just won’t be able to make that decision, it’ll be chaos, and Isaac Asimov will be turning in his grave.

• Car crime. Who wants to steal a car if it drives you straight to the police station? Better still, it could drive criminals to the local water treatment works and slowly fill the car up with sewage until the criminals apologize.

• Cars occasionally turning up at destinations with heart-attack victims inside, which won’t be a pleasant experience for anybody.

• Road rage perpetrated on your own car because it slavishly follows its programming and refuses to overtake the car in front that’s tootling along at 2 mph below the speed limit.

• Banging your head on the dashboard in frustration as your car reacts too slowly to get the last space in a car park.

• Not a problem: Other drivers won’t be able to nip up the “wrong lane” in a traffic jam, and jump into a gap near the front of the queue. What is a problem: Neither will you.

• Higher insurance rates for your make of robot car, because its driving logic is worse than a more expensive model.

• People “hacking” their cars to let it break the law.

• The first conviction for a couple having sex in a driverless car.

“The fact that you will be putting your life in the hands of a computer instead of a human is a hard concept for people to grasp,” Hall says. “And there is plenty of science fiction out there where machines have turned on their fleshy masters to fuel that worry.”

Now that would be funny!