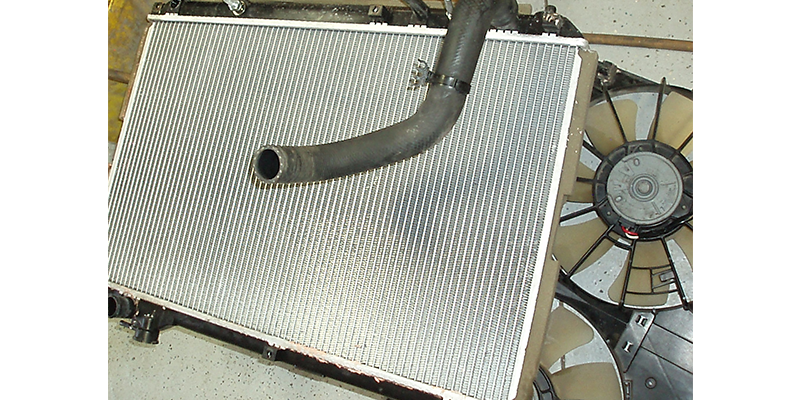 New cooling system technology will make ICEs run better and cleaner. So, let’s get on the same page by reviewing some basics.

Reading engineering papers tends to be a boring exercise, but they do give a technician like myself a new perspective on how a common automotive cooling system could actually be improved. Of course, our immediate thought is how the cooling system can keep the engine cooler. Not so, according to one paper. To the contrary, the operative word isn’t about “temperature;” it’s about “powertrain.” Given the advanced state of internal combustion engine (ICE) technology, some recent cooling system innovations will actually increase engine torque and fuel economy while reducing exhaust emissions. Let me simplify that idea: new cooling system technology will make ICEs run better and cleaner. So, let’s get on the same page by reviewing some basics.

While tweaking the cooling system for more power and economy is heady stuff, the greater part of this story is that current cooling system technology hasn’t progressed that far from the simple thermo-syphon systems introduced during the early 1900s. The thermo-syphon system circulates coolant by allowing thermally expanded coolant to rise from the hot engine into the header tank of a vertical-core brass radiator. As the coolant begins to sink due to thermal contraction, the coolant radiates heat into the air mass passing through the radiator core. After the radiator core dissipates its coolant heat, the coolant flow returns to the lower engine block to repeat the cycle. But, however simple they were, thermo-syphon systems worked well only with engines producing less than 30 hp.

With the advent of more horsepower, belt-driven centrifugal water pumps transformed the thermo-syphon system into a modern positive-flow cooling system that can operate in nearly any type of climate. Unfortunately, the centrifugal water pump supplies more coolant circulation than the engine needs in most driving situations, which makes it woefully inefficient in terms of modern energy conservation.

Ideally, an ICE should operate near the boiling point of water to ensure that water, a byproduct of combustion, is evaporated from the engine oil during normal operation. Without a high coolant temperature set-point, engine oil quickly turns into a black, highly viscous sludge that clogs vital oil passages and corrodes internal parts. Today, wax-pellet-controlled thermostats are the standard method for mechanically managing coolant flow and temperature.

A radiator removes heat from the coolant by transferring it to the relatively cool atmosphere. Radiators have evolved from the brass radiators of the past to the contemporary aluminum-core radiators with plastic head tanks. As a practical matter back in the day, radiators were mounted at the front of body sheet metal to collect free-flowing air at road speed. Nowadays, radiators are placed behind body sheet metal to achieve aerodynamic goals, which creates major design issues regarding radiator coolant capacity and exposure to free-flowing air.

During the 1950s, pressurized cooling systems were designed to prevent coolant boil-overs in hot weather and at high altitudes. Not only that, pressurizing the cooling system helps prevent hydraulic erosion of the water pump impeller at high engine speeds and suppresses coolant percolation around the combustion chamber and exhaust port areas of the cylinder head during high engine loading.

The electric fan came into popular use when FWD vehicles with transverse engines appeared in the 1980s. In contrast to mechanically driven fans, electric fans can be fully controlled by the engine management system. Variable-speed, pulse-modulated, electric cooling fans are just another item in the engineer’s toolbox for controlling coolant flow and underhood temperatures.

Now we can get to the changes in modern cooling system design. In brief, reducing the swept area of the cylinders and the exposed area of the combustion chamber reduces the thin layer of unburned hydrocarbons (HC) clinging to the cylinder’s metallic surfaces, which creates boundary-layer exhaust emissions.

With the aid of computerized engine management systems, exhaust-driven turbocharging is responsible for producing small-displacement ICEs with very high torque outputs. Aided by gasoline-direct fuel injection (GDI), variable valve timing (VVT) and up to 14:1 compression ratios, these small-displacement ICEs not only produce higher power outputs with lower exhaust emissions, but on a more critical economic plane, they also require less underhood space than their high-displacement counterparts.

Since cooling capacity is based on horsepower rather than engine displacement, the cooling system must exchange as much heat as a large-displacement engine.

Increasing the mechanical compression ratio of an ICE increases power output and fuel economy. But, with the increase of compression ratio, nitrogen oxide (NOx) emissions also increase. Higher compression ratios also require more expensive, high-octane gasoline to prevent destructive detonation, which is the fuel self-igniting under intense cylinder pressure around the circumference of the piston.

Cylinder head temperature control is not a steady-state condition. In theory, if cylinder head temperatures can be electronically reduced, compression ratios can be increased. The flipside of that statement is that, if coolant temperatures are excessively reduced, fuel economy and exhaust emissions suffer because gasoline fails to vaporize fast enough to produce efficient fuel combustion. Since the ICE develops its best fuel economy at high cooling-system temperatures and under low-torque conditions, it follows that actually changing engine coolant temperatures to conform with engine operating conditions improves engine torque and increases fuel economy, which is why we see computer-controlled electric thermostats in some Euro applications.

Electric water pumps aren’t new. They’re currently used in hybrid applications and in some high-end luxury vehicles. But it stands to reason that a computer-controlled, pulse-modulated electric water pump can operate on-demand and at variable speeds as opposed to the belt-driven centrifugal water pump that constantly runs at maximum capacity. Another advantage of an electric water pump is that it can be remotely located, which is certainly a plus in today’s crowded engine compartments.

Currently, electric water pumps are used as auxiliary water pumps in some conventional powertrains. This allows engineers to reduce the parasitic drag of a belt-driven pump by reducing its pumping capacity. In this configuration, an electric pump augments waterflow during high-demand situations. The electric pump can also be configured to increase or reduce the speed of coolant circulation in response to operating conditions. In any case, we’re probably going to see more electronically controlled water pumps and thermostats in future vehicle powertrains. TR