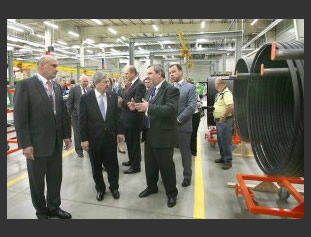 “Mitas is now an American-made brand,” said Nemec, chairman of Mitas’ parent company, CGS. “Mitas invites all farmers to buy tires made in the tractor town.”

The new plant will produce all common agricultural tire sizes and eventually produce sizes of up to 54 inches in wheel diameter and 1,200 millimeter width. The last curing press will be installed by mid-2013.

As of the ribbon cutting, the plant employed 76 full-time employees recruited locally, and by 2013 the plant will employ 237 local residents.

Mitas also announced it would accelerate its $52 million investment to achieve the full production capacity of 13,500 metric tons of tires a year by 2013, which is three years earlier than originally anticipated.

“The American farmer will benefit from increased competition,” Nemec, said, noting that Mitas is now the third radial agricultural tire producer in the U.S.