Millions of drivers are sporting at least one bald tire, putting themselves and others at risk, according to research by the RMA. 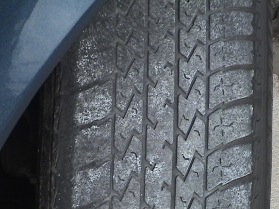 A survey of more than 7,000 vehicles revealed that more than 11% had at least one bald tire, which can increase the risk of a crash, particularly in wet weather conditions that frequently occur during fall and winter months. Extrapolating that result out, that means that nearly 28 million vehicles are in dire need to new treads.

Additional alarming statistics revealed in a national motorist phone survey earlier this year found that 64% of car owners did not know how to check tread depth and 9% never check tread depth, said RMA.

“In this bad economy, drivers may be delaying necessary vehicle maintenance to save costs,” said Charles Cannon, RMA president and CEO. “But that delay may cost you more dearly if worn out tires lead to a crash with injuries or fatalities.”

“Your tires literally keep your vehicle attached to the road," Cannon said. “Bald tires are dangerous because they cannot grip the road properly, they increase stopping distances and can contribute to skidding or loss of vehicle control."

Not only are too many motorists not paying attention to tread depth, they also are ignoring tire inflation pressure. Under inflated tires also pose a safety risk, wear out faster and increase vehicle fuel consumption.