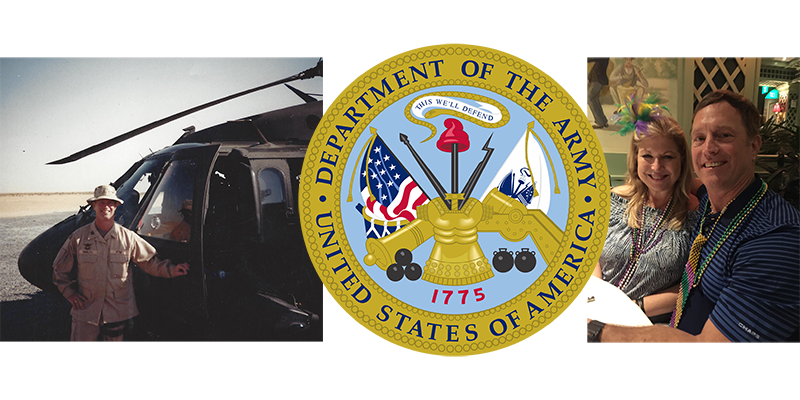 Michael Smith fulfilled a lifetime dream when he joined the U.S. Army. “I always wanted to fly…”

Michael Smith fulfilled a lifetime dream when he joined the U.S. Army.

“I always wanted to fly.  The Army at the time offered a program called ‘High School to Flight School’ and it allowed me to graduate high school and go right into helicopter training,” Smith says.

It’s not typical for military members to fly several different types of helicopters, but Smith enjoyed the challenge of learning new aircraft.

“I was kind of unique in that area because I was always trying to find ways to fly anything I could.  It was a lot of fun flying all the different helicopters,” he says.

During his career, Smith worked as an instructor pilot as well as flew attack missions, air assault missions, specialty insertions, and more.

“We don’t have a separate squad just for the instructors; he’s one of the main pilots within the unit itself,” Smith shares. “You hear a lot on the mission planning – looking at the weather and the flight plans – because he’s one of the more experienced ones. He becomes responsible for making sure that the planning is safe and is going to be easily achieved for the success of the mission.”

During his time in the Army, Smith was stationed throughout the U.S. and around the world. He was at Fort Sill, Okla.; Giebelstadt, Germany; Fort Rucker, Ala.; Fort Campbell, Ky.; Korea; Atlanta, Ga.; and Savannah, Ga.

Smith also spent a year in Iraq for Operation Iraqi Freedom. He went over to help with the pre-mission planning and preparation of the invasion, Smith says.

After retiring from the Army, Smith had talked about opening a tire dealership with his wife (his in-laws ran a tire dealership in Texas). While looking into opening a dealership, Smith took a job flying helicopters for the Emergency Medical Service (EMS) out of Beaumont, Texas.

Every day on the way to work he passed a volunteer fire department that was for sale. After looking at traffic and the growth of the town, Smith put in a bid to buy the building.

The fire station was remodeled in 90 days. Smith found a distributor, and in September 2004, Mike Smith Tire Pros in Lumberton, Texas, opened its doors.

While establishing business at the dealership, Smith continued flying for the EMS in the evenings. Eventually, Smith stepped back from flying and focused on the dealership fulltime.

“All the experts in the tire industry told me I would see a big improvement in sales once I came in the store fulltime. And they were right,” he says. “It was getting busy and when I came in fulltime, it grew again. It was for the sake of the business that I quit flying.”

Smith’s time owning the tire dealership hasn’t always been easy. In 2005, Hurricane Rita destroyed a wall of the dealership and caused lots of flooding.

The experience was difficult, but it made the business a member of community.

“The tragedy helped make us part of the community, because we went through it with them,” he says.

Today, in addition to the dealership in Lumberton, Smith owns his in-laws dealership, Woods Tire Pros, in Sherman, Texas.

While the two locations are 250 miles apart, Smith is able to run the two businesses with the support of longtime employees, online financials, and cameras.

“You know the tire industry to me has been a lot like when I was in the military. You have to have a goal and you make plans to achieve it…. Things change – education, equipment, abilities,” he says. “In aviation if you don’t know something, you have to do research or find someone smarter than you. If you want to stay viable, that’s what you have to do in the tire industry. Study your competitors, make a plan and continue to monitor it…. There have been a lot of parallels to the military. A lot of what I learned in aviation and military flying can apply to what I do every day in the business.”

Smith hopes one day to return to flying for EMS, but for right now he’s focused on growing his tire business.