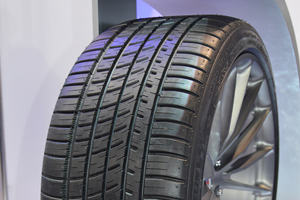 Why does Michelin race? Groupe Michelin sees the racetrack, and races such as Le Mans, as an opportunity to innovate. 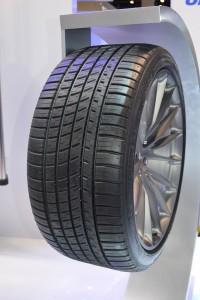 “We see the track as a laboratory. Conditions are exacting and sometimes excruciating and feedback is immediate. At the track we test, race, learn and then repeat the process. Because the research and development cycle is shorter, innovation occurs faster,” said Scott Clark, COO for Michelin North America, during the 2016 North American International Auto Show.

“What we learn at the track helps us transform the driving experience for everyone, from a safety and performance standpoint,” he continued.

One tire benefiting from the tiremaker’s racing background, the Michelin Pilot Sport All-Season 3+, was unveiled by Michelin North America during the auto show in early January.

“This latest addition transfers the best of high performance racing technology and innovation into a street tire made for the diverse weather right here in North America,” Clark said.

The newest addition to the Pilot family is an evolution of the tiremaker’s Pilot Sport A/S 3.

The UHP Michelin Pilot Sport All-Season 3+ offers 28% better snow traction than its predecessor, the Pilot Sport A/S 3, delivers better dry grip than competitors, and has the shortest wet and dry braking in its category, Michelin said.

The tire features Michelin’s Helio+ Compound and biting edges in the tread to help with snow traction, according to the tiremaker. Extreme amounts of silica in the tread compound, developed at Le Mans, combined with variable thickness sipes and circumferential grooves help the tire with wet grip and resistance to hydroplaning. The Pilot Sport A/S 3+ also has Michelin’s Variable Contact Patch 3.0, developed in Formula One racing, which helps distribute forces and temperatures more evenly over the contact patch, Michelin said.

The Pilot Sport A/S3+ tire is designed, engineered and manufactured in North Amer