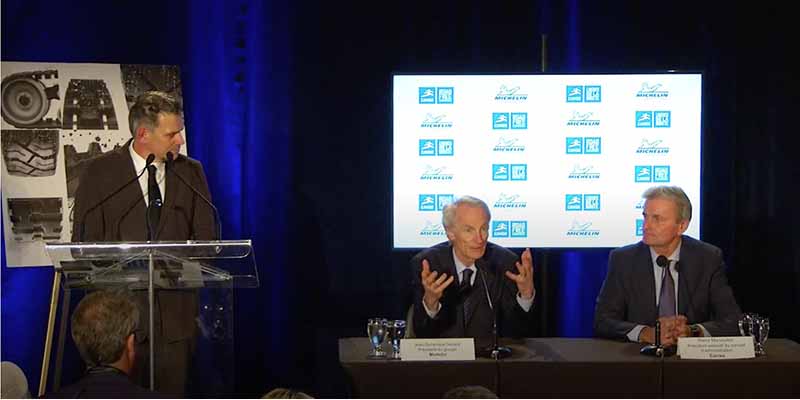 The affinity between the two tiremakers is unusual and transcends to complementary products, mission and operational philosophies between both organizations.

Jean-Dominique Senard, CEO of the Michelin Group (seated on left) and Pierre Marcouiller, executive chairman of the board of directors of Camso Inc. (seated on right) share their thoughts on Michelin’s acquisition of Camso and its impact.

On the morning of July 12, Michelin Group announced its acquisition of Camso Inc., a leader in off-road tires, wheels, rubber tracks and systems for the material handling, construction, agricultural and power-sports industries headquartered in Magog, Quebec. The combined organizations create a positive partnership, both companies said. It will allow Michelin to quickly broaden its product offering into areas not fully covered and allows Camso to benefit from the technology and global footprint of a much larger organization.

Jean-Dominique Senard, CEO of the Michelin Group, and Pierre Marcouiller, executive chairman of the board of directors of Camso Inc., made themselves available for a press conference that afternoon to provide a more detailed perspective of the deal and its impact.

The deal appears to be an enthusiastic win-win for both organizations, what Camso leadership referred to as the “beginning of a new adventure” for the “Road Free” tiremaker.

“We’ve always said since the beginning when we’ve decided to focus on rubber for these off-road products… the objective has always been the same – we wanted to be number one around the world in the off-road market,” says Pierre Marcouiller, executive chairman of the board of directors of Camso, in his remarks to the media. “This was a crazy dream at that time in the past. I remember that we had sales of $18 million Canadian dollars in the rubber market, and now I can see that we are now, with Michelin, number one around the world. And that’s been possible not only in terms of sales figures but also in terms of our common ground or common affinity.”

The deal itself developed quickly. Talks between the two companies began earlier this year. The fact that the deal came together so fast appears to be “a positive sign,” indicative of the good fit between both organizations.

“First of all, let me say that within my life as [a person in this industry], I’ve rarely seen this circumstance where you see two companies that are joining forces in this very simple way with great friendship as well,” said Jean-Dominique Senard, CEO of the Michelin Group. “I’m saying it the way I see it. These values by Camso and the values of Michelin are basically the same. It’s not just a matter of words. These are words that are based upon relationships we’ve had since we have been into a dialogue together, but also [based on] the incredible positive atmosphere that we see amongst our common teams. It seems that this is our common destiny – on common markets towards common customers as well – that we’ll find in our common forces, and a strong economic and personal advantage, I believe.”

That affinity between the two tiremakers is unusual, according to both Marcouiller and Senard, and transcends to complementary products, mission and operational philosophies between both organizations. Camso’s Marcouiller went so far as to call it “a perfect match.”

“We’re very complementary in all businesses that are active, and actually, there are no overlaps, and that’s very rare,” Marcouiller explained. “I’ve done a lot of acquisition in my life and usually you always say, ‘Okay, I’m buying this, but I’m in and there’s this thing, this section – and what are we going to do with it?’ In the case of Michelin and Camso, it’s a perfect match – a perfect match in terms of products, in terms of distribution. [Camso] will have access to the distribution of Michelin, especially in South East Asia, China, Japan, Korea and India. Those markets are expanding very rapidly and Michelin for sure has much better coverage than we have, so that’s one example of the synergies. And for all of these reasons, if you look at the culture, if you look at the products, if you look at the distribution, and we have not even talked about technology yet, and Michelin, I believe we don’t need to explain it. Michelin is the world leader in terms of technology in the sector of tires. Tire technologies are much advanced at Michelin and the people of Magog will take advantage of that.”

According to Marcouiller, Camso is number one among the top three in the world’s ranking in the four market sectors in which they compete. Being part of the Michelin Group, he says, will help advance their goals further.