More than two years ago, au­thor and retired automotive businessman Rick Cogbill took a trip that inspired a life-changing project. 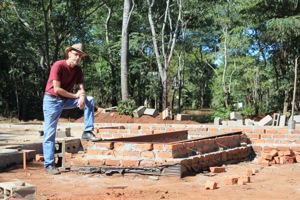 In January 2010, the creator of The Car Side (see page 80) accompanied his daughter to the African country of Mozambique to visit his niece, who was working there as a nurse.

While his daughter visited with her cousin, Cogbill spent the month-long trip helping around the mission station. With a background in mechanics, Cogbill repaired vehicles and off­ered up advice to the locals.

“What I discovered is that they had some local guys there helping with maintenance, but they had no training at all,” he explains. “So, I spent most of my time showing them how to do basic things like brakes and shocks and that kind of stuff.”

By the end of the trip, the locals were begging Cogbill to return and teach them more about the trade they were learning. “The fellows I was working with came to me and said, ‘You’ve got to come back, there is so much more we want to learn and we can’t get training out here,’” he says.

While he enjoyed his time there and appreciated the gesture, between work and life demands and the cost of travel, he couldn’t foresee another trip in the near future.

“It was on my mind a lot that year,” he says. “And that June, I had a life changing event. I had a heart attack, just out of the blue one day. I wasn’t expecting it; I don’t have high blood pressure or any health issues, so I was totally shocked!”

Cogbill adds that while he was laying in intensive care for three days, he was reading a book called “Axioms” by Bill Hybels, which consists of moti­vational sayings for business leaders.

“I happened to come across this one chapter and the title of the chapter was ‘What life are you waiting for?’ and that really got to me,” he says. “I realized that what I really loved doing was being back overseas teaching these guys a trade so they could get out of poverty.”

Soon after recovering from his heart attack, Cogbill began creating the foundations of Mercy Tech Mission, and has had the opportunity to go back to Mozambique with more volunteers on three additional occasions. 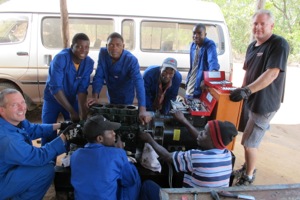 The reason for his most recent trip in April and May of this year was to begin construction of a training center on a large piece of property managed by SAM ministries.

“I was teaching there and basically working under a tin roof or under a tree, and we started talking about how long-term, we wanted to have an actual training place for these guys,” he explains. “They asked me to draw up some plans so we could do fund­raising for it, and this has been our initiative with their blessing.”

Once completed, Cogbill and other volunteers can continue to teach Moz­­ambican people useful and valuable trade skills in the area. “They are out in the rural area, they’re not in the city so there isn’t a place for the rural people to get any training or education like that.”

While the country now has a stable government, it is still coming out of the devastation of a long civil war, and many citizens are poor, displaced and/or jobless. 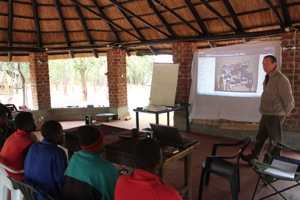 “Mozambique is pretty modern, but the problem that they had is when they separated from the Portuguese, they entered into a long period of civil war,” explains Cogbill. “The in­frastructure of the country was des­troyed and it is now slowly getting things back in order. Roads are being built and the cities are getting a lot of help from the government, but the rural areas are not getting a lot. You still have people living out in the bush or in a mud hut and cooking outside. The kids are barefoot, there’s no clean water and no education unless some organization starts one.”

He adds that the Mozambican students are eager to earn a living on their own and are grateful for the opportunity to learn a trade.

“My friend, who teaches at a college, says his third or fourth year students act bored and would rather be doing something else. But when you go to Mozambique, guys will travel for hours to attend your class and have not even had breakfast that day,” he says. “They can’t wait to get there and take it all in and become something.”

Since starting Mercy Tech Mission, Cogbill says he has been delighted with the number of volunteers and people who are interested in his project.

“I’ve established a board with three other members and they help me with the planning and logistics and everything,” he says. “And then we’ve got in my local town here (Summer­land, B.C.) about half a dozen people who help us do fundraising events.”

There also are a few hundred people who subscribe to his newsletters and visit his mission website.
The mission recently applied for official non-profit status in Canada and expects to have that status by fall.

One of the biggest obstacles Cogbill has faced is raising funds to complete projects.

Cogbill says he’s been trying to raise funds within the automotive industry, but the reception has been mixed. “I thought, how hard would it be for a shop owner to maybe give up a hundred bucks a month so a guy in a third-world country can buy tools and work to feed his family,” he says. “I’ve gone to a lot of shops and talked to the owner and suggested the idea to them, but I’ve been a little discouraged that very few have been into it. Everything is about the bottom line.”

On the other side, Cogbill says he’s had some companies really jump on board and get into it. “Some of them want to send their technicians so they have the experience,” he says.

He adds that some companies also have been generous with materials and tools for teaching. “CDX Global produces training videos for mechanics, and they have donated their programs for me to use over there for training, which has been amazing.”

Cogbill says that his group is planning another trip to Mozambique for March 2013, and hopes to complete the new training center during that trip.

Rick Cogbill, a freelance writer and former shop owner in Summerland, B.C., also writes The Car Side. “A Fine Day for a Drive,” his first book based on the characters from the column, is now available for order at thecarside.com. A portion of the book’s proceeds benefits Mercy Tech Mission. He’s reportedly hard at work on a follow-up.

Mercy Tech Mission Teaches Trades to the Most Deserving