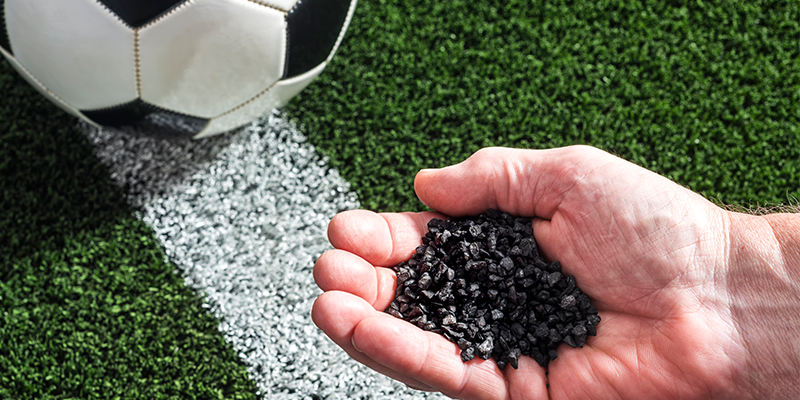 Crumb rubber, produced by the recycling of used tires, is under debate as an environmental concern in the state of Maryland.

The Chesapeake Automotive Business Association (CABA) and the Tire Industry Association (TIA) have testified against bills circulating through the Maryland legislature – one of which would classify used and scrap tires as hazardous material, which could hurt the businesses of Maryland tire recyclers.

Jason Faust, executive director of the Chesapeake Automotive Business Association (CABA), said HB 1142 classifies scrap tires and synthetic turf as a hazardous material. According to legislative records, the bill, sponsored by Delegate Mary A. Lehman, has been withdrawn. Faust said he and representatives from the Tire Industry Association met with Lehman about the bill, explaining how it could harm Maryland tire recyclers and adversely affect the demand for used tires in the state by deeming crumb rubber a hazardous material.

“In Maryland, we created a market for those used tires,” he explained. “Now they’re infill for astroturf and our recyclers have ramped up the rubber mulch business here, too. We once had stockpiles of tires… our position [with this legislation] was that we were not for or against the healthiness of crumb rubber; we simply said this legislation needs to consider the fact that we got away from an environmental mess by creating a market for those used tires, and if we remove that market, we potentially end up with the same situation we had 20 years ago.”

Faust said the second bill, HB 1118, would restrict or eliminate the use of state funds for installation and maintenance of synthetic turf fields. He said sponsors of the bill and environmental groups say synthetic turf, made from used tires, poses a potential health risk to kids who play on playgrounds or fields with the material since certain studies have said chemicals in synthetic turf have shown to increase a child’s risk of cancer.

“Synthetic turf is composed of a urethane-backed carpet with tufted colored plastic “blades”, laid on top of a rock foundation. The plastic contains toxics such as heavy metals, phthalates, UV inhibitors, colorants, and flame retardants. Waste tires or other synthetic rubber, ground into small beads, are usually dumped on top for cushioning, and contain even more toxic substances,” the Maryland Chapter of the Sierra Club argues on its website. “Plastic and rubber are hot in the summer and emit greenhouse gases. Synthetic rubber playgrounds present many of the same problems.”

However, Faust said despite the potential health risks, HB 1118 also attempts to eliminate the market for crumb rubber. He said instead of outlawing crumb rubber completely, the bill looks to eliminate funding for construction and maintenance of synthetic turf surfaces, which would mean that municipalities and school systems that rely on state funding for construction maintenance of synthetic turf fields may no longer be able to afford their upkeep.

According to legislative records, HB 1118 remains in the Maryland House appropriations committee. Faust said CABA will continue to monitor both bills and advocate for its members.

“We do believe that the scrap tire market has helped our dealers become more competitive and save costs because the disposal of scrap tires is less of a business headache than it used to be,” he said. “So, we are continuing to work with a number of delegates in monitoring this legislation, and we work closely with TIA to act quickly, and we’re not going to let our membership which consists of traditional family-owned mom-and-pop hardworking Maryland businessmen and women to be bullied through legislation unintentionally.”