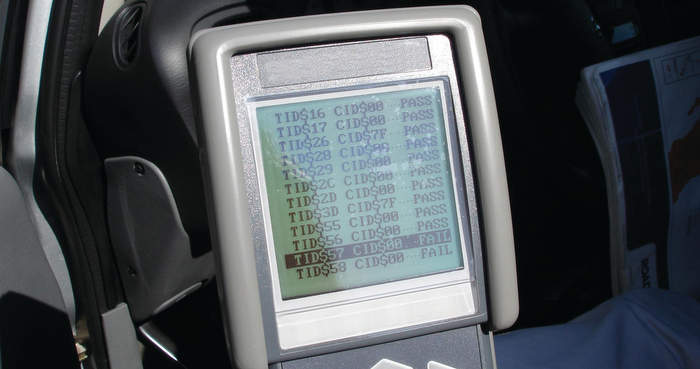 Nothing is more frustrating than “fixing” a customer’s vehicle and then have it come back a few days or weeks later with the check engine light on and the same fault code or a new fault code. You look bad, lose your customer’s confidence in your ability to fix their vehicle, and in states that track your success rate at repairing emission failures, a low score can steer potential customers away from your shop.

So, how can you improve your success rate for accurately diagnosing and repairing driveability and emissions faults, and reduce comebacks? Mode $06 may be the answer.

Mode $06 is one of the nine diagnostic modes that are part of the OBDII on-board diagnostics system on all 1996 and newer vehicles. As originally conceived, Mode $06 was not designed for use by technicians and was supposed to be “hidden” data used by the OBDII system to detect faults and set fault codes. Mode $06 was not supposed to be readily accessible scan tool data used for analyzing the operation of various components in the engine management and emission control systems. Consequently, many older scan tools lacked the capability to access and display Mode $06 data.

The fact that Mode $06 data is in hexadecimal code (a base 16 number system that uses digits 0 to 9 plus letters A through F) makes it difficult to translate and convert into familiar decimal values. That’s what the dollar sign is all about. The “$” symbol means the data is in hex code, not ordinary decimal numbers.

To understand what the hex code data means, you need a reference chart from the vehicle manufacturer that identifies what component or system test each line of code refers to, and what the acceptable range of values are for that particular test. Only then can you determine whether or not a particular test value was good or bad. Unfortunately, much of this information is difficult to locate or has never been published!

A lot of extra effort goes into just figuring out why a particular fault code is being set, but for those who figured out how to use Mode $06 data, they had the key to solving no-code driveability and emission faults; to identifying sensors and other components that were still operating within acceptable limits but would likely fail soon; and to reducing unnecessary comebacks, especially those involving catalytic converter, EVAP system and EGR system repairs. 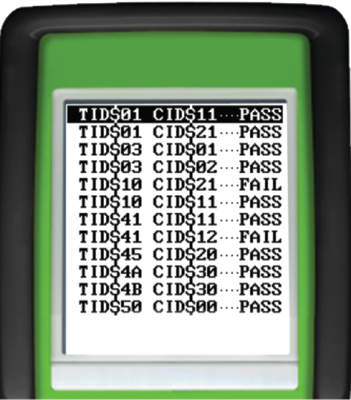 On OBDII systems up to the introduction of controller area network (CAN) electrical systems, there are two code identification tags for each line of data. The first is the test identification (TID) that indicates the monitor test, and the second is the component identification (CID) that identifies the sensor or other component that is being tested. After those come the actual test results. On CAN vehicles (those from 2003 to 2008 and newer), the TID is now called the monitor identification (MID) — same thing, just a different name. Better yet, the MID test IDs have been standardized across different vehicle makes and models.

Depending on the capabilities and software in the scan tool or scanner software you are using, the hex code TID and CID values may be translated into plain English (or Spanish) followed by the hex code or decimal test results, the range of acceptable values for that particular test, the units of measure for that test (voltage, pressure, etc.), and a PASS or FAIL indication.

Each of these tests has an upper and lower limit that is programmed into the PCM by the calibration values for that particular year, make and model of vehicle. The acceptable range of test results for each CID is determined by the vehicle manufacturer. Cut points are then set to ensure emissions compliance.

As long as all of the components that are being monitored and tested by the OBDII system pass, no codes are set and the check engine light remains off. A component that fails a test won’t necessarily set a code or turn on the check engine light. The code/light depends on the component that failed the test, how many times it failed the test (multiple failures may be required for some tests), and whether or not another fault has prevented a test from running.

An oxygen sensor fault, for example, will prevent any of the catalyst monitor tests from running because the OBDII system requires reliable inputs from all of the upstream and downstream O2 sensors to check catalyst efficiency. If the vehicle has a bad upstream or downstream O2 sensor, the system can’t compare the before and after readings to calculate converter efficiency. Consequently, an O2 sensor component test failure will prevent the catalyst monitor from running its tests. Keep this in mind when reviewing Mode $06 data because a failure in one test may prevent other tests from running.

For example, say one of the oxygen sensors is lazy or is biased rich or lean. This condition may not be bad enough to fail a CID test, but it might be sluggish or biased enough to throw off the air/fuel mixture, which would result in a loss of fuel economy, poor throttle response or an engine misfire. That’s why you need to look closely at the CID test results for that sensor in Mode $06 so you can see how closely the sensor is operating to its upper and lower limits. If the test results are just within the limits, the sensor is probably causing a problem and will soon fail. Time to replace it with a new one.

The following is a partial list of the Mode $06 monitor tests that can be accessed on a late-model Ford vehicle with a CAN electrical system:

Finding the Real Cause

In some cases, OBDII may set a fault code for a problem that is being caused by something else. This includes lean fuel mixture codes, misfire codes and catalyst efficiency codes. A vehicle cannot pass an OBDII plug-in emissions test if the check engine light is on. You have to read and clear the code, diagnose the fault, and make whatever repairs are required so all the OBDII monitors will run and pass.

Let’s say a vehicle failed an OBDII plug-in emissions test because of a P0420 catalyst efficiency code. Should you replace the converter, the oxygen sensors or something else?

Here’s how Mode $06 can help. By looking at the CID test results data, you can see which catalyst test failed. Then, you can look at the various CID tests for the upstream and downstream oxygen sensors to see if perhaps one or more sensors are lazy or biased and affecting the test results. In some cases, you may find the O2 sensors are all functioning well within their normal limits, but catalyst efficiency is being affected by a crack or pinhole in an exhaust manifold, Y-pipe or flex pipe ahead of the converter that’s leaking air into the exhaust.

EVAP codes are always a pain because EVAP problems can be difficult and time-consuming to diagnose. You can spend hours with a smoke machine trying to find pinhole leaks when the real fault may be in the canister purge control solenoid, a vent solenoid or the fuel pressure sensor in the fuel tank. Again, you can use Mode $06 to look at the various EVAP component tests to see why a particular code might have set. You can also look at the various EVAP test results to make sure all of the components are well within range and not operating near their minimum or maximum threshold limits.

Though OBDII performs a long list of component self-tests, sometimes a test limit may be set too high or too low, causing codes to set unnecessarily. For example, a vehicle may be setting a misfire code repeatedly because the maximum limit for misfires was set too low. The vehicle manufacturer may revise the limit and offer a new calibration that can be downloaded and loaded into the vehicle’s PCM. That’s the beauty of reflashing PCMs. Reflashing allows changes in calibration to be easily updated (assuming you have a J2534 pass-through tool or a scan tool with flash capabilities).

Watch out for TID/CID tests that contain old or bogus data when viewing Mode $06 data. On some Ford V6 applications, the CID test results may show high misfire rates for cylinders 7 and 8. Of course, there are no cylinders 7 and 8 in a V6. It’s a programming glitch that OBDII ignores as it monitors misfires, but if you don’t know that, you may assume the engine has a misfire problem.

The same can apply to other test lines as well. If the vehicle is not equipped with a particular sensor or component, there may be bogus data displayed for that test result.

The bottom line is that Mode $06 is an advanced diagnostic mode that allows you to peer into the inner workings of the OBDII system. It requires a scan tool that can access and display the TID and CID test results, and an understanding of the data you are looking at and how to use it. Mode $06 is not something you are going to pick up overnight. Working with Mode $06 takes some hands-on experience to appreciate its subtleties and capabilities. But once you master it, Mode $06 can provide invaluable diagnostic insight into many OBDII failures.

To get familiar with the mysteries of Mode $06, take some online training courses or attend a hands-on clinic at a community college, vocational school or other location. Bring your own scan tool if you don’t know how to access Mode $06 and have the instructor show you how to find and display it. Then, play around with the Mode $06 data on some vehicles to see how the various test results are displayed. This way you can learn to distinguish good readings from borderline readings to detect sensors and other components that may be causing driveability or emission faults without setting a code.