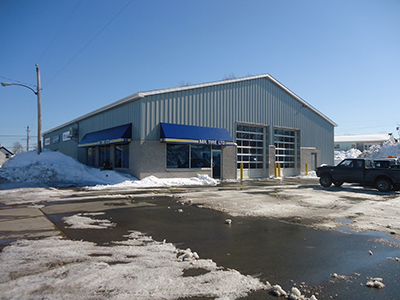 Mr. Tire Ltd. is a second generation tire and auto repair shop that was founded in Sydney, Nova Scotia, in 1968. 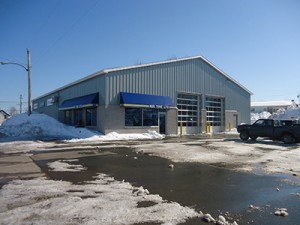 “My dad, Doug, was originally a Firestone rep and then he got into the tire business,” explains owner Glenn Falconer. “He started out as a BFGoodrich wholesaler in a building that didn’t even have a washroom in it. Within the next couple of years he acquired a shop.”

In addition to the retail store, Falconer says they also operated a car rental service for many years.

When his father retired in 2012, Falconer officially took over. He grew up in the business, working full-time beside his father for more than 30 years.

“I was working when I was 10 years old,” he says. “I started out washing the rental cars, sweeping the floors, picking up garbage, then working in the retread plant for years and then the counter and now sitting in the captain’s seat. I’ve done it all the way up.”

Today, Falconer operates two locations, one in Sydney and the other in nearby Westville. He also owns a retread plant.

“We have six employees at one location and 10 employees at the other location,” he says. “One of our shops is strictly tires. We’re a Michelin, BFGoodrich and Uniroyal dealer. At the main shop we do full mechanical service and tire.”

He says they can do just about anything under the hood and everything for tires. “We do mechanical, alignments, brakes, everything we do is good for our business,” he says.

“Our retread plant, since it’s a manufacturing facility, keeps us busy. Mechanical stays busy, too, and we keep rolling tires out the door left and right.”

Falconer says the majority of vehicles they service are newer, and he knows it’s more important than ever to make sure they have the proper equipment on hand to get the work done.

“The industry changes all the time, and I want to stay up to date,” he says. “Our shops have new tire changers so they can handle custom wheels. We have three balancers in each shop, three tire machines in each shop and all the alignment gear.”

Falconer credits his success to being financially stable and not having debt. “One thing I have going for me is that everything we have is paid for. We’re stable that way,” he says. “Our inventory is paid. Our real estate is paid. It makes the tire business fun.”

Falconer says the other value he’s learned in business is to trust your instincts and worry about yourself. “I don’t worry about what other tire shops do. I just focus on what I do,” he says. “I don’t want to be like the other shops. I do my thing.”

He also says operating the car rental business taught him a lot about customer service. “That allowed me to meet all kinds of people,” he says. “You learn to read people quickly and how to handle them.”

While Sydney is a relatively small area, competition is everywhere. Falconer explains that the area has been through many changes in the past few decades. 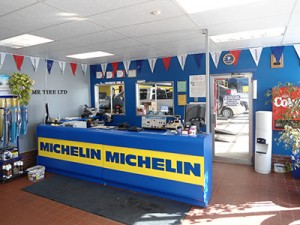 “There’s competition all around us but I’m all for that because competition helps your business,” he says. “Back in the day, Sydney was a thriving community – fishing, mining – now we have nothing. That’s all gone, but we’re still ticking along.”

He adds that a Michelin plant closed near their Westville location about a year ago, adding another blow to the area.

“It produced tires about 15 minutes from us,” he says. “We treated their employees very well, and we got a lot of business from them. Our sales are still up over last year, so obviously, we’re still doing the right thing.”

Falconer says customer service, experience and knowledge keep customers coming back. “Business comes down to services and looking after people,” he says. “I always tell our counter people to ask the customer about themselves, then they like you and they respect you because you’re treating them like a person. I always tell my staff to treat the person on the other side of the counter as if it was you.”

When a customer arrives at Mr. Tire, they are promptly greeted, and a sales representative drives their car into the bay. “After the work is done, they pay the bill and we shake hands,” Falconer says.

He says people also come to Mr. Tire because it’s clean and is a pleasant place to be. “My two buildings are top notch, clean,” he says. “To me, that’s the biggest advertising right there.”

They recently renovated their Westville location and have received many compliments. The waiting area includes free Wi-Fi and comfortable seating.

“It’s one of the nicest tire shops in the Maritimes from what I hear from reps and people coming in,” Falconer says. “I had one guy tell me it was like being in his dentist office.”

In addition to word-of-mouth, he also uses traditional advertising to keep customers in the loop. “In the local areas, I put my name on the boards,” he says. “I do TV advertising in the spring and fall. I did newspaper and radio in previous years, but I eliminated it because I find that TV has been really working for us.”

They also utilize Facebook to advertise promotions about specials and services.

In addition to advertising, he says they donate to local charities and are involved in the local communities that they serve.

While the two locations are going strong, Falconer says he’d love to expand.

“I would love to open another tire shop or two,” he says. The tire business is in my blood, and I’m still young. So down the road I could see myself having four shops.”