TIA reported increases in membership, a strengthened financial base, and significant rises in GTE show attendance and exhibitors.

In the face of a struggling economy, it appears TIA and its Global Tire Expo are on a strong upswing as the association reported increases in membership, a strengthened financial base, and significant rises in show attendance and exhibitors. 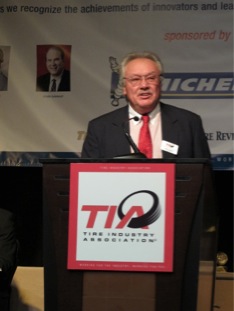 During yesterday’s annual general membership meeting, TIA officials reported that association membership rose 620 over the last 12 months, pushing membership above 6,000, a group that sports more than 15,000 individual points of sale in the U.S.

TIA treasurer Tom Formanek reported to members that the association ended its most recent fiscal year “in the black,” and that current cash reserves remained level with last year “despite the ups and downs of the stock market.” He said TIA’s financial condition is solid.

Much of TIA’s revenue continues to come from its already extensive training programs. Both outgoing president Mike Berra and incoming president Larry Brandt stressed the importance of TIA’s training efforts in their respective speeches yesterday during the general meeting and later at the Tire Industry Honors event.

Brandt spotlighted new initiatives for 2012, starting with the creation of TIA’s Learning Management System, which will take online its current Automotive Training Service, Commercial Training Service, Earthmover Training Service and TPMS training. That addition will occur in the first quarter of 2012, he said.

Also in 2012, Brandt said, TIA will take its ATS training effort on the road, with a 28-city blitz.

On another front, Brandt said one of his goals in 2012 is to improve TIA’s relationship with the RMA, and to continue strengthening the bond between the tire group and SEMA.

During the annual meeting, held at the Cosmopolitan Hotel in Las Vegas, outgoing president Berra passed the ceremonial gavel to Brandt, and welcomed seven new and returning board members, all elected to three-year terms.

Winning a $2,500 renewable four-year scholarship was Vivian McBride of Gurnee, Ill., who plans to attend Vanderbilt University in the fall.

Winning a $1,250 renewable four-year scholarship were Taylor Allen of Granite City, Ill., and plans to attend the University of Missouri; Aaron Baldwin from Amarillo, Texas, who plans to attend Austin College.

Also during the general meeting, TIA members passed three resolutions, one in support of the U.S. government maintaining the long-standing use of “last in, first out” as the accepted means for inventory accounting; a second calling on Congress to tackle lawsuit abuse; and a third supporting HR2082, the “Returning Heroes Tax Credit.”