Nina Murray of Flesherton, Ont., was announced as the winner of the Raybestos 1964 GTO-R from the brand’s summer 2011 North American promotion. Murray’s name was drawn as the winner from some 60,000 entries. 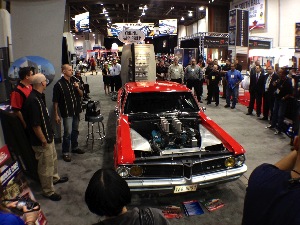 “My husband and I are so thrilled about this prize. We used to go to car races at the local track in Varney when we first started dating, so it’s pretty cool that we have won our own race car. Since we can’t make it to Las Vegas, we already have plans to attend the auto show in Detroit to see it before it’s ours in June,” said Murray.

Murray will receive the keys to her new car in June 2012. Until then, the Raybestos ’64 GTO-R is scheduled for additional TV and on-track appearances, and will tour the car show circuit.

The car features a customized suspension with nearly 800 pounds of weight eliminated, a 700 HP GM LSX 454 engine and Raybestos NASCAR-spec racing brakes. During the sweepstakes, raybestosgarage.com offered a behind-the-scenes view of the entire build process.