The enfren eco is an eco-friendly all-season performance tire that offers an 18% reduction in rolling resistance over its predecessor. 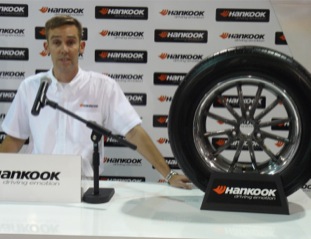 “Rising fuel costs and a heightened interest in the preservation of our environment are rapidly becoming more important to consumers,” said Soo Il Lee, president of Hankook Tire America Corp. “Our new enfren eco will give consumers a choice when it comes to replacement tires that focus on improved vehicle fuel economy and the environment.”

Hankook Tire launched the first generation of enfren in 2008 in the Korean domestic market. This was followed by the launch of enfren in Australia and Japan in 2009 and China in 2010. The all-new enfren eco, which offers an 18% reduction in rolling resistance over its predecessor, will launch first in the U.S., with introductions in other markets to follow.