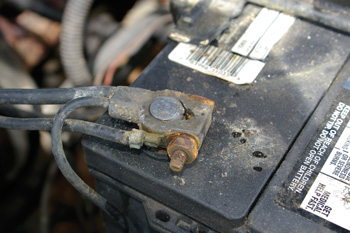 Long, cold winters are hard on car batteries, but long hot summers can be even harsher. Batteries in hot climates like Arizona, New Mexico and Florida typically need to be replaced a year or two sooner than those in states with more moderate climates. The reason is that heat causes the electrolyte inside the battery to evaporate, and once the level drops below the tops of the plates, the plates suffer permanent damage. To make matters worse, sealed top “maintenance-free” batteries have no provisions for adding make-up water. Consequently, many of these batteries are doomed if their water level gets too low.

Absorbent Glass Mat (AGM) batteries are typically much longer-lived because they have no liquid electrolyte in their cells. The electrolyte is held in spongy mats between the lead cell plates. This not only makes such batteries spill-proof but also less vulnerable to outgassing and loss of electrolyte over time.

AGM batteries are being used in a growing number of new vehicles not only because of their increased longevity but also because they perform better with high electrical loads and stop/start systems. Over the next couple of years, up to 40 percent of new cars may be equipped with fuel-saving stop/start systems and AGM batteries. Ford has said that up to 70 percent of its cars will have stop/start by 2017. Stop/start is being used on the 2014 Ford Fusion with a 1.5L EcoBoost engine, and the 2014 Chevy Malibu 2.5L engine (which gets 3 mpg better fuel economy in city driving than its conventional predecessor).

A stop/start system turns the engine off when a vehicle stops moving for more than a few seconds. This saves what would otherwise be wasted while the engine is idling. Stop/start systems can improve city fuel economy numbers an average of 3.5 percent up to 14 percent depending on how the vehicle is driven. On applications that come factory-equipped with an AGM battery, the same type of battery should be used to replace the original battery when a battery replacement becomes necessary.

Also important to battery life is keeping the battery at or near full charge. When a battery runs down, sulfate builds up on the plates. The longer the battery sits in a discharged condition, the harder it is to knock the sulfate off the plates when the battery is recharged. If there are too many deep discharge cycles with a conventional lead-acid battery, or the battery is chronically undercharged, it will lose its ability to accept a full charge. The battery will grow weaker and eventually fail.

Late-model vehicles are loaded with electronics that place increased demands on the battery and charging system. Many models have “keep alive” memories that draw a small current from the battery even when the key is off. To minimize the power drain, many modules are programmed to go into a sleep mode that minimizes power consumption at some time interval after the ignition has been switched off. Even so, the residual key-off power drain can be up to 100 milliwatts 30 minutes or more after the ignition has been switched off. Opening a door or approaching a vehicle with a smart key fob can activate the keyless entry system and other modules, increasing the power drain on the battery for a period of time. Consequently, if a vehicle is not driven for say a week to 10 days, the battery may discharge to the point where it can no longer crank the engine.

Loose, corroded or damaged battery cables that make poor electrical contact also can cause a battery to run down or prevent the engine from starting. Battery cables should always be inspected and cleaned or replaced as needed when starting/charging problems are encountered, or when installing a new battery.