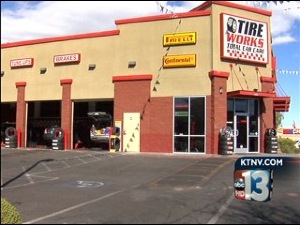 Embattled Las Vegas tire dealer Tire Works has been cleared by the Nevada attorney general of all charges related to customer complaints of being over-charged and uncompleted service work.

The attorney general also took the TV station to task for over amplifying the issue. “The (Nevada) Consumer Affairs Division’s decision to permit the news media to accompany them on the compliance checks was the reason the case was so exaggerated and received so much publicity. The net effect was that the allegations were made to appear much larger than they were."

Early last year, the station began airing stories based on consumer complaints about the tire dealership. At one point, state investigators got involved and worked with the station on a sting operation where they left a 2000 Chevy Malibu they claimed was in perfect condition at three Tire Works locations.

All three stores claimed the vehicle required expensive repairs. However, the state inadvertently sold the evidence vehicle at auction after the state filed its suit against Tire Works.

For its part, Tire Works remains livid over the situation. CFO Roshie Weightman, said, “The state was the teaming up with KTNV that caused these problems and wasted taxpayers’ money. They’re a station with failing ratings, and they did it to try and establish ratings. It really shocks me that the reporter may have gone to a school of journalism. She must have missed a lot of courses on fact-finding."

Weightman said the company is considering bringing legal action against the station.

“KTNV didn’t let facts stand in the way of a story and almost single handedly wrecked a business with 130 employees. It just didn’t matter how good our track record with customers was," said Weightman.

"This is the type of business that adds customers in an economic downturn but these misguided stories sidetracked our company’s business plans.”