Rather than wait until the start of the new year, Kumho Tire USA held its 2012 dealer meeting at the close of 2011.

The timing of the mid-December gathering, along with the event’s "Let’s Go" theme, each reflected the tiremaker’s eagerness to continue the momentum it gained in 2011 well into 2012 – and beyond. 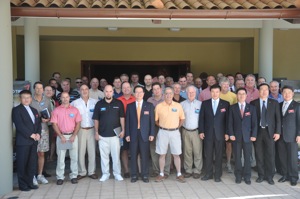 And while there were no radical changes or groundbreaking new products announced, Kumho used the event as a platform to deliver the message that the successful moves made in 2011 will continue into 2012. This includes progress in dealer communication, vast improvements in product availability and a boost in Kumho brand awareness, brought about largely by the tiremaker’s shift to sports marketing.

Held just outside of Liberia, Costa Rica, the meeting recapped the successes of 2011 and offered a glimpse at Kumho’s plans for this year to the 38 key dealers and distributors in attendance.

Challenges Overcome
When addressing dealers, Kumho officials reminded of the challenges the company faced going into 2011: a still-sluggish economy, the financial troubles of parent company Kumho Asiana Group, and an industry-wide supply shortage.

“We continued to progress through our debt workout situation this year with your help,” said J.H. Kim, Kumho Tire Co. president and CEO. “We still have a lot of work to do, but good progress has been made. One thing is certain: We will see more change in 2012; this change will bring challenges and opportunities for all of us next year, making it very im­portant that we work together. Kum­ho Tire is committed to your future success, and we look forward to a bright 2012.”

Also on hand for the meeting was J.B. Kim, Kumho Tire USA president and CEO, who told tire dealers the company greatly improved fill rates through the consolidation of its former five warehouses to three locations in Rancho Cucamonga, Calif., Chicago and Atlanta. “This year, our fill rates were among the best of any of your suppliers for passenger tires,” he said. 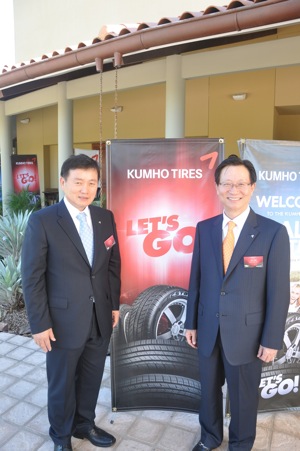 National vice president of sales Armand Allaire elaborated on the fill rate issue, saying, “Supply was a bright spot for Kumho in 2011. Moving from five to three warehouses allowed us to concentrate our supply pipeline and replenishment schedules on three locations. As a result of that action, our fill rates were quite good, and we continue to work toward a 100% fill rate goal.”

Rick Brennan, vice president of marketing, offered Tire Review more specifics, explaining that in the first half of 2010, Kumho’s overall fill rate was roughly 79%. The second half of 2010 saw an increase to just over 82%, and in 2011, fill rates reached about 90%.

“Dealers are extremely happy with those results, especially when some of the other manufacturers have been really aggressive but haven’t been able to fill orders for what they’ve been pushing,” Brennan said. “It’s one thing to get aggressive and push product, but if you can’t provide it, it doesn’t help dealers one bit.”

Boosting Brand Awareness
In 2011, Kumho continued to invest in its hard-hitting sports marketing program, which will carry through for this year. J.B. Kim told dealers, “Our new focus on sports marketing has placed the Kumho brand among some of the most well-known and popular sports teams in the U.S.”

Through sponsorships of the NBA’s Los Angeles Lakers and Miami Heat, NFL’s New York Jets and Buffalo Bills, plus USC Trojans football and U.S. men’s and women’s soccer teams, Kumho’s overall brand awareness climbed from 21% to 25%. In New England, due to the NFL sponsorships, there was an increase to 29%, according to David Koh, marketing communications manager.

At the meeting, the tiremaker extended an invitation for dealers to develop exclusive sports tie-ins for markets in which Kumho holds sponsorships, like the Dunn Tire co-branding initiative with the Buffalo Bills last season, Koh said. 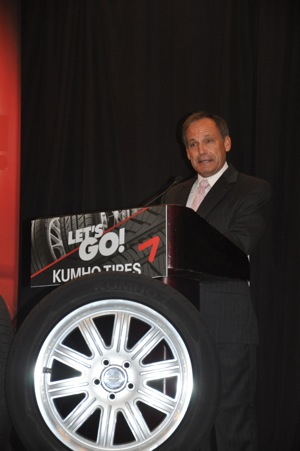 “Our business is 65% wholesale, and when it comes to retail, most of our dealers are smaller, with fewer locations,” Koh said after the meeting. “So trying to do a retail promotion has been a challenge because we need dealers with strong store concentrations within 75 miles of a given sports team. Rather than reaching out to a large group of smaller retailers, we’re trying to work with wholesalers because they know their markets and the potential retailers within those markets that would be ideal for a partnership.”

Products and Marketing
Kumho’s Ecsta 4X, launched in July, has earned impressive marks in testing, and 8.6 out of 10 drivers who purchased the tire said they would consider purchasing it again, according to Charles van Heusden, manager of training and product planning. Kumho has added 12 more sizes to the tire’s lineup, and also plans to add sizes to the Ecsta LE Sport, Ecsta LX Platinum and Eco Solus KL21 lines.

Part of the strategy behind not introducing new tire lines in 2012 is the late rollout last year of the Ecsta 4X, and the still-growing acceptance of that tire in the marketplace, Bren­nan explained after the meeting.

“We launched the Ecsta 4X late in the year for a typical product launch and there are a lot of dealers who haven’t taken it on yet, so it’s still somewhat of a launchable product,” he said. “Dealers are starting to realize how much of an impact Kumho made when we launched it. There are consumers who are out there looking specifically for this tire.”

The consumer rebate on the Ecsta 4X and LX Platinum has been so successful that it was extended through Jan. 31, and Kumho also plans to run a series of similar rebates between April and October, each paired with a different sports tie-in.

Kumho’s hefty TV and consumer magazine advertising campaigns, which are currently running in combination with the Ecsta rebates, will return even larger in 2012, with an estimated 140 million impressions planned during the April to October time frame, according to Koh. The advertising will target the age 18-49 male demographic, Kumho’s strongest.

Kumho also will continue to focus on its Internet presence and social media campaigns, which brought success in 2011, he added.

Tools and Tips for Dealers
One new announcement at the meeting was Kumho’s Premium Fuel Program, which is a revamped, simplified version of the tiremaker’s original Fuel Program. Rather than a scaled rewards program based on dealer purchases of Kumho’s entire product lineup, the Premium Fuel Program focuses solely on UHP lines. For every 12 tires a dealer buys in a quarter, he or she receives $60 back.

“Our intent is to make the new program as accessible and user-friendly as possible,” Brennan said. “The new program also will put a focus on communicating more with dealers to make sure their needs are met. When dealers sign up for the Premium Fuel Program, we will send out a free kit of Kumho POP materials for them to use in their stores. We also will utilize fax-blasts and e-mail blasts on a regular basis to make sure everyone’s in the loop on updates, new products, new POP materials and more.”

Current Fuel Dealers will be grandfathered into the updated program, he noted.

Looking ahead to 2012, Brennan told dealers to be prepared for continued slow economic recovery and a gradual improvement in the unemployment rate. Home sales and new construction will slowly grow, and consumer spending will continue to grow at a 2.5% rate.

Going into 2012, the biggest challenge for dealers is knowing what to stock to meet fluctuating monthly demand. Considering dealers would need to stock 3,500 SKUs to cover about 80% of the market, this is no small feat, according to Brennan.

“In 2011, we saw a lot of dealers starting to look at the market quite differently, saying, ‘I just can’t stock that. I don’t care if the price is low, I just can’t put that in inventory,’” he said. “They’re really realizing how complex it’s become and they’ve started doing a better job of keeping on top of it. They have to know their own business well and know what they need at different price points. And that’s a hard decision to make, because it may mean losing an opportunity if you don’t have something in stock. That’s why it’s so important to partner with someone who can get tires to you fast.”

Combined, all these minor adjustments and improvements will offer Kumho dealers a better arsenal of tools to improve their businesses, according to Allaire, who closed the meeting’s general session by saying, “Kumho Tire USA is going to be much easier to do business with in 2012.”