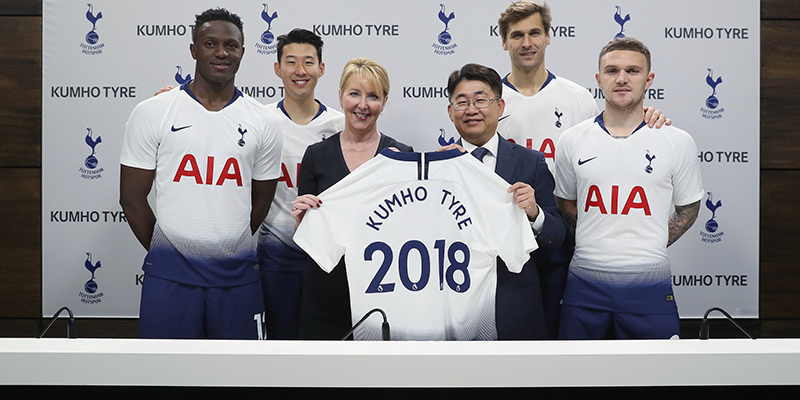 Kumho Tire has extended its partnership with Tottenham Hotspur, a prestigious soccer club in the English Premier League, for another three years.

Kumho Tire has extended its partnership with Tottenham Hotspur, a prestigious soccer club in the English Premier League, for another three years. This new agreement continues a successful partnership between the Club and Kumho which began in 2016.

As a global company, Kumho’s intention is to gain massive worldwide attention in soccer stadiums. According to a Nielsen study in 2018, more than 40% of the population at age 16 or older in major population centers around the world consider themselves interested or very interested in following soccer more so than any other sport. While interest in the sport is lower in the U.S. than most countries, its global popularity is continuously rising as it stands at 32%, up from 28% just four years prior.

Last year, South Korean soccer player Son Heung-Min extended his contract with Tottenham through 2023. Kumho said it found this as a unique opportunity to align with his fan base to feel a personal connection to the team and to strengthen brand awareness within the football community. Through a range of activities including co-created digital campaigns and branding on the Club’s in-stadium LED advertising system, Kumho said it expects a range of engagement from Son’s fans.

“We are thrilled to be extending our association with such a prestigious club such as Tottenham Hotspur – this partnership has already been extremely successful and we very much look forward to continuing to work on engaging with our customers and the Club’s fans around the world, which will enable us to enhance our brand recognition and our position as a global tire maker.” Said Ju Kyungtai, President of Kumho Tire Europe GmbH.

“Extending our partnership with Kumho Tire reinforces the success of the relationship we have had over the past two years,” said Daniel Levy, chairman of Tottenham Hotspur. “It is exciting to continue this collaboration that will see us support the growth of the Kumho business and brand through our growing digital channels both here in the UK and in key international markets.”

The agreement was signed at Hotspur Way, the club’s training center located in London, during a ceremony attended by representatives from both parties, including Ju Kyungtai, president of Kumho Tire Europe GmbH, and first-team players Son Heung-min, Victor Wanyama, Fernando Llorente and  Kieran Trippier.