Krone awarded Mitas as the best supplier in the segment “delivery of tires.”

Krone awarded Mitas as the best supplier in the segment “delivery of tires.” The ceremonial event was held in Spelle, Germany, on Sept. 18. 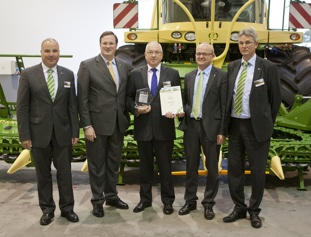 “Mitas won the award in a strong competition of six major tire manufacturers,” said Gerhard Schulterobben, Mitas’ German sales subsidiary director. ”It is a great success for Mitas and recognition of the top-quality products and associated service we offer.”

Schulterobben received the award on behalf of Mitas from Bernard Krone, the general director and owner.

“Mitas focuses on agricultural tires,” said Andrew Mabin, Mitas’ sales and marketing director. “We are proud that Krone, one of the major original equipment manufacturers, appreciates our close attention to detail and reliability.”