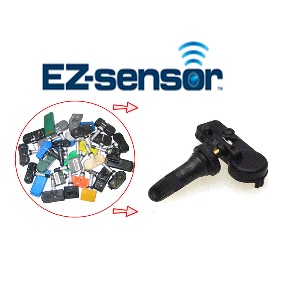 Recently, you’ve heard me say, “nothing is easy.” That’s my new slogan. It doesn’t matter how simple an action seems, it will get complicated quickly.

For instance, I recently heard from a friend, Jared, who sold a set of wheels for a new 2010 Camaro. The wheels were the same size as OE. All he wanted to do was take the tires and sensors and mount them on the new wheels. Sounds simple enough, right? As Jared began to relearn the sensors, he realized that his tool had not been updated to read the sensors on this car. He had to return the car to the owner and explain that he would need it back after he updated the TPMS tool.

If you have purchased a TPMS tool like this, you need to check for updates every few months. This one little oversight cost Jared time and frustration. Before he could get the car in the shop to reprogram the sensors, he received a call from the owner telling him the TPMS light was flashing and the car wasn’t receiving a signal from one of the tires.

It just gets better: it appeared that in the process of swapping the sensors, the technician underestimated the amount of torque needed for the tiny little nut that holds the sensor to the valve stem. It wasn’t tight enough and the vibration apparently killed it. So Jared called the auto parts store to get a new sensor delivered; they didn’t have it yet. So he called the dealership; they didn’t have it either. After explaining the whole ordeal to the customer, Jared patiently waited for a sensor from the dealership, which then told him it was backordered. After a couple of weeks, he got frustrated and called me for help. I e-mailed John Maxgay, one of the engineers with GM who designs TPMS systems.

John informed me that the part number listed in the application guides is wrong because GM changed to a different sensor that is used on its global platform. It even operates on a different frequency than most other sensors. With the new part number, Jared was able to source the sensor within a few days. Altogether it took him nearly a month to completely finish the job, which should have taken no more than two hours.

Oversights like these cost a tire dealer time and money. Be sure to invest in the latest training, updates and products that will make your shop as profitable as possible.

One solution to this problem is the new EZ-sensor from Schrader (ez-sensor.com), launched in September. According to Schrader, this tool will program a blank sensor that will be able to replace over 90% of the sensors currently on the market. To keep the cost to a minimum, the programmer works with the Bartec Tech400 and the Schra­der AirAware 21230.

Instead of having to wait to get a sensor delivered, now we can have a few blanks on hand and program them as needed. This is the technology that SEMA and the tire industry have fought to have for years. To help in severe cold climates where summer and winter tires and wheels are used, you can copy the ID numbers from OE sensors, program a blank sensor and install it in the spare set. This is a huge opportunity and should help simplify winter changeover routines.

As for the TPMS data itself, Sean MacKinnon, TIA’s director of automotive training development, will have the next sensor application reference manual ready in time for this year’s Global Tire Expo/SEMA Show. Each year, TIA publishes a comprehensive manual to help decipher TPMS part numbers, torque specs and needed tools. Chris Bell, TIA director of training, says TIA will be upgrading its ATS program next year to include the latest TPMS tools and vehicle specifications, along with modern tire changers. I would suggest becoming a TIA member and attending its seminars at the GTE/SEMA Show in Novem­ber.

If you think that installing tires is still an entry-level job, you may want to reconsider the aptitude of the technicians performing this function. Contact TIA and find out when the next training class will be held. If you have a large organization, send a key person for the full ATS and TPMS training to become an instructor. This person can then certify all of your technicians onsite and at a time that’s convenient for them.

Evolving Education
This is just the tip of the iceberg regarding the level of technology that we as tire shops are about to face.
You should be keenly aware of the electronic revolution being incorporated into new vehicles, but you may not know that much of this technology already has been on the street for a few years. Many of these vehicles are going out of warranty and owners will be looking for more competitively priced options than they can get at vehicle dealerships.

Case in point: hybrid-electric vehicle systems. I recently learned that Toyota, Lexus and even Ford hybrid gas/electric systems can be severely damaged simply by pushing the vehicle into the shop. Steve Evanoff, an instructor with Carquest Technical Institute, explains what can happen if certain procedures are not followed.

“The hybrids mentioned can be damaged if pushed into the bay from the parking lot. However, rolling them back and forth on an alignment machine will not cause damage, except if the Toyotas are left in ‘ready’ mode, or the ignition key is left in the ‘run’ position for a period of time on the other models. Two things can occur: first, the conventional battery could drain; second, the vehicles can start up on their own at any time if the system senses the HV battery going low.

“If a Toyota or Lexus were pushed while in the ‘ready’ mode and the inverter is damaged, this is a $3,000-$4,000 repair, and only factory certified technicians can sell the part and perform the service work,” he adds.

In response to the question of what he sees technicians asking for most and which technologies will be covered in future classes, Evanoff says, “Direct Gas Injection (DGI) is the new technology to delve into. European specialty cars have used the technology for about 10 years. Now, domestic manufacturers are implementing it into more and more vehicles.”

CAFE standards recently have been raised significantly, and automakers are searching for every viable alternative to squeeze more mileage out of a gallon of gas. “Some automakers, such as Lexus, are using both DGI and common rail fuel injection to equalize the air-fuel ratio to a perfect 14.7:1 in their efforts to lower emissions,” he adds.

To find out where classes are being held and to sign up, visit carquest.-com/procti.html. Carquest recently changed its pricing structure and now offers these courses at attractive rates to encourage managers, owners and technicians to get involved. If a Carquest training class isn’t available in your area, check with NAPA, O’Reilly or other parts suppliers and get signed up.

Another Hybrid Consideration
While I’m on the hybrid topic, I’d like to make one final note: When asked to quote tires on a hybrid gas/electric vehicle, please remember that the OE tire has been designed for this specific vehicle in both construction (some tires are extra load) and in rolling resistance. I suggest researching or verifying that the replacement tires you offer will not hinder the fuel economy that these vehicles have been designed to achieve.

Losses of 5, 7 and up to 10 mpg could be realized with the wrong tire installed on these vehicles. New rolling resistance tests and benchmarks will help in the future, but until then, be cautious regarding the tires that you suggest.

As I said in the beginning, nothing is easy, and it will only get harder and more complicated. Let’s be proactive in getting the training that we need, and make sure to use your social media outlets to let your current customers and potential new customers know that you are spending the money necessary to be able to work on their vehicles.

If we use this correctly, we may be able to bridge the knowledge gap between ourselves and the person who thinks an $80-$100 per hour labor charge is too high.

Know New Training and Products That Will Keep Your Shop Profitable