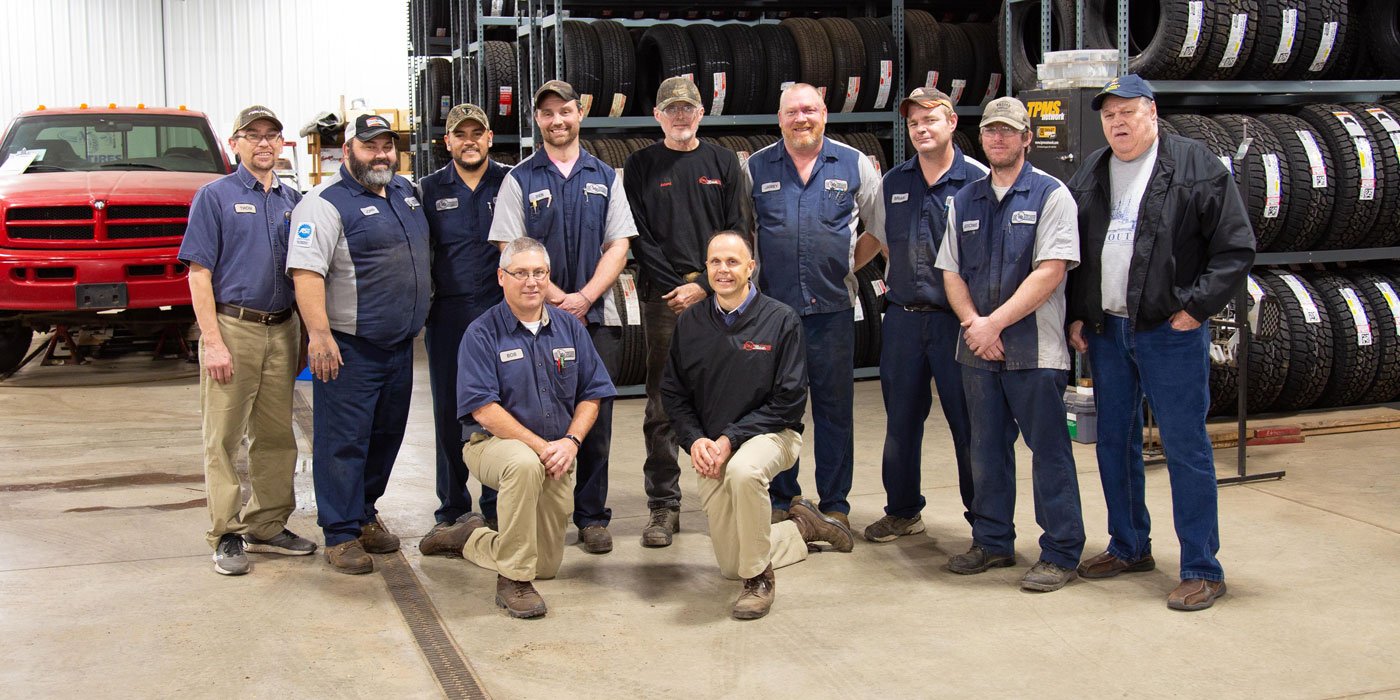 Single-location TMA Yankton has always been deeply committed to honestly serving its customers, contributing to the community and treating its employees well.

While TMA Yankton has grown, changed and even moved to a new location in its 36-year history, the tire dealership has upheld the same fundamental goals and philosophies since day one.

The single-location shop has always been deeply committed to honestly serving its customers, contributing to the community and treating its employees well. Owners Doug Budig and Bob Vornhagen work together on all aspects of running the dealership, ensuring future success.

Located in Yankton, South Dakota, the shop saw 2018 gross sales of roughly $2.2 million from a mix of 60% tires and 40% vehicle service. About 75% of gross sales were from retail, while wholesale and commercial sales made up 5% and 20%, respectively.

TMA Yankton, which has 10 full-time employees, is a member of K&M Tire, Mr. Tire, Big 3 Tire, and NAPA AutoCare, as well as the Yankton Area Chamber of Commerce.

“Over the years, we have greatly diversified our services,” Budig says. “We have always been known for tires but are becoming more known now for our total car care. From import to domestic, tune-ups to tires, we are proud to be a one-stop shop. We are fortunate to have been in business in Yankton for 36 years.”

Budig’s father, Dave Budig, entered the tire industry when he began working part-time at a Goodyear store in Rochester, Minnesota, while he was going to junior college there.

After he graduated in 1972, he was promoted to a Goodyear store in Duluth, Minnesota, before taking a commercial sales job in Minneapolis with General Tire in 1974. Eventually, Dave Budig became a store manager there until 1980, when his family moved to Rapid City, South Dakota, where he served as the supervisor of all of the retail locations.

“At the time, TMA was called Midwest Tire and Muffler; he was in charge of managing the retail locations that they had at that time,” Doug Budig says. “In 1982, Midwest Tire started a store in Yankton, and he supervised it, and officially took over ownership of that store in January 1983.”

Budig worked for his father part-time as a tire technician during high school and college before taking a job in sales with another company upon graduation. After two years, he returned to TMA Yankton in 1994 to work with his father, taking on more responsibility as time went on.

Dave Budig hired Vornhagen in 1991 as an automotive technician. As the years went by, Vornhagen also took on added responsibility, eventually purchasing shares and becoming part-owner alongside Budig.

Dave Budig retired in 2007, leaving the pair fully in charge of running the dealership.

As a locally-owned business in a small town, TMA Yankton relies heavily on word-of-mouth advertising — something that always has come easily for the shop.

Aside from that, the dealership advertises its annual Customer Appreciation Truckload Tire Sale every August in print, radio and on Facebook. TMA Yankton also advertises in the area lake guide, since many campers and fishermen come to the area for recreation — in fact, one of the shop’s 13 service bays is a drive-through to accommodate trucks, campers, RVs and tractors.

“Honestly, we do not do a lot of advertising,” Budig says. “Word of mouth naturally happens; if we just take care of people and their vehicles, then it’s just natural for people to share that. Just like anything else, people will tell others if they get good service.”

TMA Yankton’s customer service motto, “Where you’re more than just a customer,” guides its staff, which has “an honest and sincere passion to help people,” Budig says.

While he admits it helps to have a new, 12,000-square-foot facility with a bright, clean and spacious entrance and waiting room, Budig says the basis of customer service is communicating with customers and techs.

“We’re thankful to have a good crew and that makes all the difference,” he adds. “We have people here who have a passion for helping people and customers sense when you truly care about them and their vehicles. You can advertise and do all these other fancy things, but it all comes back to the basics of taking care of people, their needs and their vehicles.”

“As businesspeople, we realize that we didn’t get here by ourselves,” Vornhagen says. “A lot of people have helped us over the years to get where we’re at right now and you want a community that’s strong and thriving. You just want to be able to do what you can do for people.”

Aside from monetary donations, TMA Yankton staff are very involved in the town of 15,000 people, volunteering as coaches for youth sports teams, speaking at community and high school career fairs and participating in the World of Work program by letting high school students who are interested in auto repair shadow them.

“We rarely say no (to supporting a cause) because most people who ask have a need, whether it’s a health challenge, a financial need or to support a cause,” Vornhagen says. “There are a lot of small requests that come up every day and every week, and we just talk about it for a minute or two and decide — and usually it’s yes just because this is part of our community.”

Though the shop has seen success, there have been obstacles along the way. According to Budig, one challenge has been hiring and retaining good people, even though “we are fortunate to have a great crew who have been with us for a number of years.”

“My dad once said, ‘You can’t fly with the eagles if you’re surrounded by a bunch of turkeys,’” he says, adding that his techs are ASE certified and attend monthly NAPA AutoCare classes. They also participate in the Bridgestone Education Network online.

The other major challenge — which ultimately benefited the shop in the end — was when, after operating out of the Yankton Mall for 31 years, Budig and Vornhagen found out that their lease would not be renewed.

“We asked ourselves, ‘What are we going to do now?’” says Budig. “We knew we’d have to find something that was a good retail location, that was affordable, and that could have enough room for growth, so that was a big challenge.”

In August of 2018, TMA Yankton opened in its current location, which offers plenty of space for its staff and customers, as well as room to grow in the future.

“Our goal is to be the best tire and automotive repair facility in the area by providing great products at a fair price with exceptional customer service,” Budig says. “We just want to keep doing what we’re doing, to continue improving our service, our trust and our profitability.”

Is K&M Tire one of your distributors? Do you have what it takes to be a Mr. Tire/Big 3 Tire Top Shop? Nominations are open! Visit www.MrTireBig3TopShop.com today.