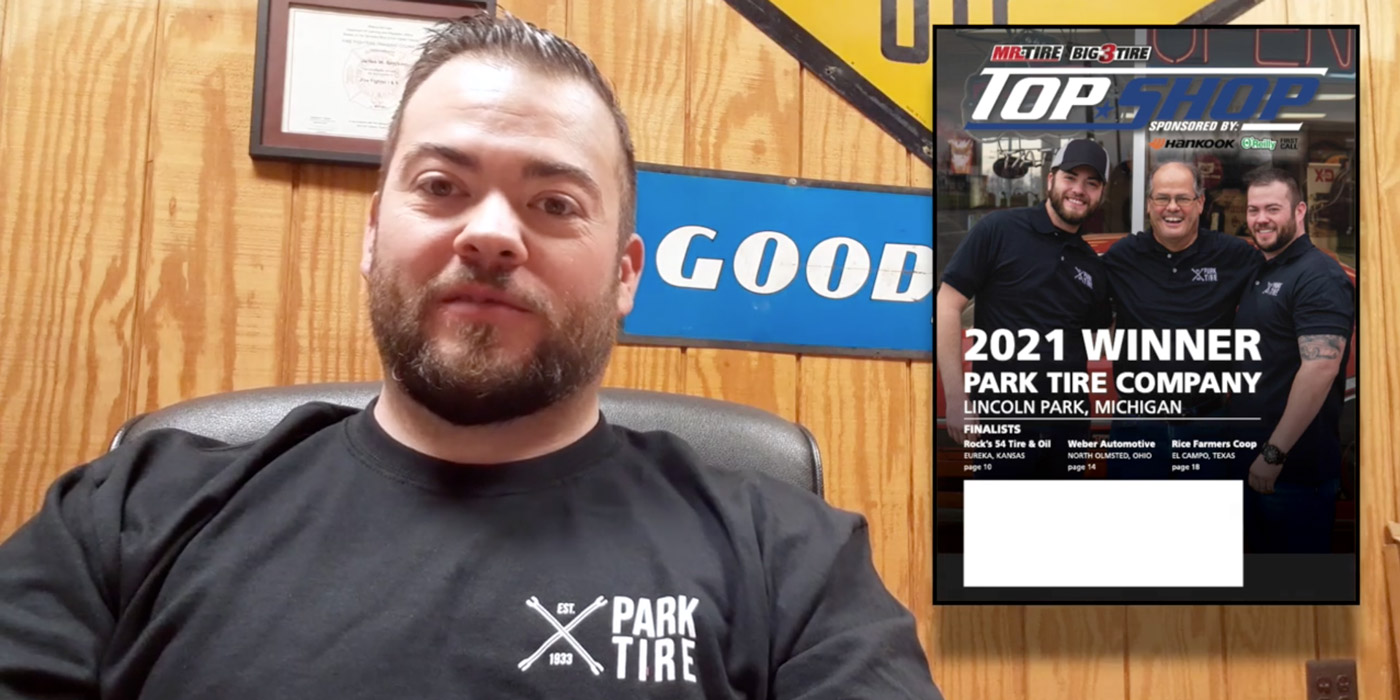 On Day 1 of K&M Tire’s first virtual dealer conference, it was announced that Park Tire Co. was selected as the 2021 Mr. Tire/Big 3 Tire Top Shop, sponsored by O’Reilly Auto Parts and Hankook Tire.

Distributor K&M Tire’s 2021 Dealer Conference kicked off virtually for the first time Jan. 20, with organizers taking to the virtual stage to recognize its 2021 Mr. Tire/Big 3 Tire Top Shop winner and finalists, as well as supporting its dealers with business tips and insights into upcoming industry trends.

To open the show, Ken Langhals, founder and CEO of K&M Tire, as well as Cheryl Gossard, president of K&M Tire, thanked dealers for their business and partnership, and shared that next year’s dealer conference will be in Kansas City.

“What impressed us most about you this past year is how well you adapted to the situation at hand and kept on rollin’,” Wallick said. “There was probably a time last year when you were in what basically amounted to survival mode, but it didn’t take long for you to formulate a plan and execute on that plan – even without the benefit of hindsight.”

Tire Review Editor Mary DellaValle recognized Park Tire during the conference, noting the shop has been a staple in the southeast part of Michigan City and its surrounding areas since its founding in 1933 by Vernie Stocking, great-grandfather of current owner James Stocking, Jr.

“The culture at Park Tire is such that employees are treated like family, which boosts employee morale and productivity, and fosters a spirit of cooperation,” she said. “This team spirit also allows Jim time to work ‘on’ the business, even though he’s quick to jump in and help in the bays if needed. He says he trusts his team to get the job done, noting ‘They work like a well-oiled machine.’”

“The whole staff at K&M has been phenomenal over the years, from Ken at the top all the way through to the guys at the warehouse,” Stocking said. “That’s why we’re here: Customer service, it’s what we strive for. At Park Tire we want people to feel welcome, like they’re a part of family. And, essentially, they are, because our customers are why we are here. Without them, there is no us.”

DellaValle also recognized the competition’s three finalists, including (in no particular order):

Schroeder introduced seven topics during his presentation which he believes commercial tire dealers will feel the effects from, in order from short- to long-term.

Schroeder began by saying that if current tariffs stay in place or if additional tariffs are added to tires being shipped to the U.S., it could present a challenging environment for the tire industry in America.

He said the market for truck tires in the U.S. is about 26 million units.

“When you break down the truck tire market, about half of them are sold through a replacement channel, and the other half are sold through national account programs directly to fleets, original equipment managers and, at a smaller scale, to the government … and about 45% or so are actually imported into our country” he said. “That replacement segment, which is the largest commercial segment, they are largely imported tires.”

Super regional trucking is continuing to grow as a segment of the trucking industry, Schroeder said, because the routes are typically shorter than long-haul routes. This is seen as a partial solution to the driver shortage, as this segment allows drivers to spend more nights at home.

Because of this, he said, tire manufacturers have begun to launch tires for super-regional applications, featuring tread patterns that combine the features of already-existing long-haul and regional tires.

Final-mile delivery opportunities have exploded in the past six-to-eight months as more consumers continue to order goods online, Schroeder said.

Schroeder added studies show that nearly half of the supply chain cost to get a good from the manufacturer to a consumer’s home is in the “final mile” – meaning the distance from the warehouse near the consumer to their home.

“Amazon has hired almost 200,000 people in the past seven-to-nine months to address this growing demand,” he said. “These final-mile routes are brutal, with a lot of starting, stopping, turning and impacts – a very tough application for tires. So, this is an emerging segment for tire manufacturers as well, similar to super-regional.”

Schroeder said while fuel is the No. 1 cost for these trucks, tires come in second.

“A lot of these delivery service provider vehicles, they could go through two sets, maybe even four sets of tires in a year, depending on their route,” he said. “So, they’re working with tire manufacturers right now to develop tires that can stand up to that sort of abuse and give them some decent mileage.”

Schroeder said because there is a wide variety of smart tire technology being used today, the market is probably still a few years away from developing a standard for use in smart tires.

He shared most of these technologies are centered around the air pressure in a tire, with some automatically adjusting air pressure based on load conditions. Schroeder gave a few examples of what is currently available, including Continental’s ContiPressureCheck, Aperia’s Halo Tire Inflation system, SAF-Holland’s SMAR-te Tire Pilot, and WheelRight’s drive-over system.

The Trump Administration spoke a lot about developing a large infrastructure bill over the last few years, Schroeder said, adding the Biden Administration hasn’t yet shown any indication of backing off from those talks.

“If it does happen, I think it’s going to be a big boon for the trucking industry,” he said. “This is going to require equipment and raw materials to move, and they’re going to need to be moved by truck. If our federal government does put some large infrastructure bill in place – the numbers that are being thrown around are $1-$2 trillion – this is something that could last for a decade or more. That will be a big boon for our businesses to sell a lot of truck tires.”

Schroeder said electric vehicles are here to stay, so the question shouldn’t be whether tire dealers will need to worry about them in terms of tire sales, but rather how big is the market going to get?

“A lot of vehicles are in it, including some big ones like Freightliner and PACCAR … combined they’re about two-thirds of the classic truck market,” he explained. “There are also some start-up companies you might have heard of, like Nikola, Thor, and a lot of people have heard of Tesla already.”

Electrification is also popular in the final-mile delivery market.

“As tire people, this is something we have to pay attention to,” he said. “The torque on these vehicles can be quite a bit different than those with a typical combustion engine with a clutch or an automatic [transmission]. That means a lot of different characteristics that tire manufacturers have to deal with, from the tread pattern to the compounding to handle that type of torque.”

“I think over time, if the tariff landscape remains in place, a lot of tire manufacturers will starting (asking themselves) if they want to move some of their manufacturing capacity from some other part of the world back into the USA,” Schroeder said. “As tire manufacturers, we’re watching this very closely.”