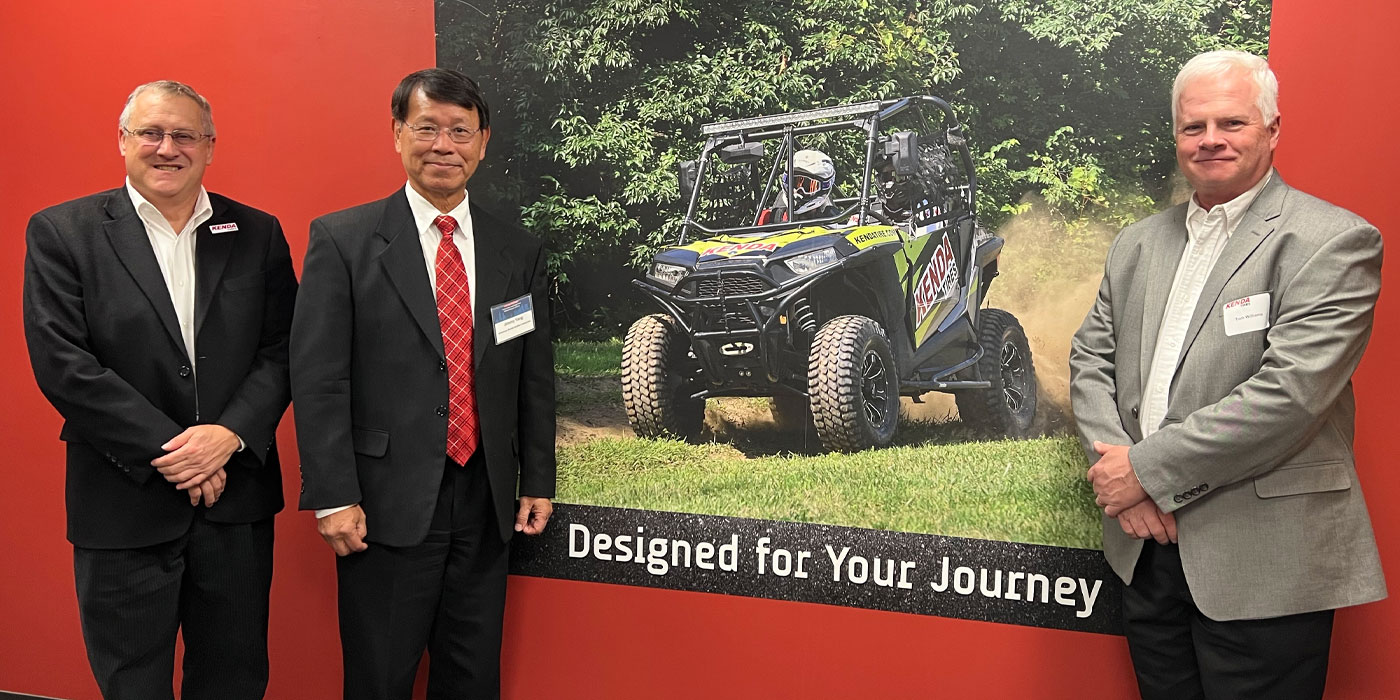 Over the past seven years, Kenda Tire has established its tech center in North America, introduced its next generation of its PLT tire lines in the US and added tire testing equipment and technology that has helped the Taiwanese tiremaker become known for its tagline of “premium performance at a value price.” And according to Jimmy Yang, the company’s global president and CEO, it’s just getting started in solidifying its presence in North America.

“Today, we celebrate 60 years of continued innovation and excellence as a global leader in tire development and manufacturing,” Yang said during a 60th-anniversary event at the company’s North American technical center in Canton, Ohio last week. “Kenda has been putting a lot of resources in growing market share here…one of our goals is building Kenda as a world-class American brand. This center is helping us do that.”

During the 60th anniversary event, Yang gave local dignitaries, Kenda dealers and members of the media an overview of Kenda’s history and growth as well as a tour of its North American tech center to showcase the investment it has made into the market and how it continues to expand its brand and technological prowess.

Since its founding in 1962 by Yang’s father, Chin-Pao Yang, Kenda went from a bike tire manufacturer in Taiwan to the 24th largest global tire manufacturer that produces automotive, bike, Powersports, trailer and lawn and garden tires. These segments are produced across the company’s eight tire manufacturing plants in southeast Asia and created at its four technical centers around the world, one of them being Canton.

With a global footprint and 13,000 employees worldwide, Yang said Kenda has become “a truly international company” that also includes eight-wheel manufacturing facilities across the U.S. and another six-wheel assembly operations in Europe. Globally, Kenda’s business is broken down into 35% automotive tires, 25% bicycle tires, 25% Powersports and the rest trailer, golf cart and lawn and garden tires. In fact, Yang said Kenda owns 85% of the golf cart tire market, and as Powersports has gained in popularity, the company’s market share is growing in that segment.

Yang said that since 2015, Kenda’s North Amerian Tech Center has been a $20 million investment for the company, with a recent $8 million spent on adding a wing for a dynamic tire footprint analysis lab. “North America is the biggest market for us,” Yang says, noting that while its tires are still imported from southeast Asia, “the brand image has been based upon meeting the needs of the American consumer.”

One such product Yang updated attendees on is Kenda’s Klever M/T2, which was unveiled at SEMA this year and is slated to launch this summer.

“With the technology center here, with the engineers here, the engineer can talk to the market, talk to the consumers and get an understanding about what they need and then come up with products much, much quicker and accurately to meet the market demands,” Yang said.

Yet becoming an international brand hasn’t come without its challenges. Last year, the International Trade Commission slapped countervailing duties on PLT tire imports from Vietnam, Taiwan, Thailand and South Korea. Two of Kenda’s manufacturing facilities are in Vietnam and the company has another in Taiwan.

“Our production has been moved from China to Taiwan, and now from Taiwan to Vietnam,” Yang said. “Kenda’s state-of-the-art manufacturing facility in Vietnam is pumping out a lot of tires… Our production is catching up, but there are still shipping disruptions with the difficulty of getting shipping space and getting containers to load tires, which has had some impact on our growth. Now, we are starting to see availability improving in booking the shipping space and also getting empty containers. So, we expect production to resume to normal levels. By the end of the year, we will utilize the 20,000-unit daily production capacity in Vietnam, and in the meantime, we’re planning for the next phase of expansion. So hopefully by 2024, we will start to see additional capacity coming out from that factory.”

Focusing on areas where Kenda can grow in the North American market, Yang points to OE fitments.

“One of Kenda’s goals is to penetrate the OE market because we understand the North American market,” says Yang, pointing to its tech center as proof. While Kenda does have spare tire OE business with Honda, the company is looking for more in order to grow its brand. “This is an uphill battle that we want to participate in, but Kenda is the new kid on the block.”

As part of its 60th-anniversary celebration, Kenda gave attendees a tour of its tech center to demonstrate the technology and research that backs its tire lines.

“Ultimately, Kenda’s tagline is designed for your journey, which we have all over the walls, and this is really about bringing to life all of the product segments for how people use them in the real world,” said Brandon Stotsenburg, vice president of automotive for Kenda. “This center is a demonstration of what we do in the local market.”

To make sure its tires stand up to the test, Kenda utilizes a variety of equipment, such as a tire uniformity machine and a tire endurance machine, which allows its engineers to understand the performance of its tires over time. A tire aging cellar shows how tires break down when exposed to a wide range of temperatures. In all of these tests, Kenda benchmarks its tires against competitors.

“It’s very important for us as a company, not only to develop our own product but to make sure our product is equal or better than our competitors,” said Tom Williams, the company’s vice president of engineering who has been responsible for building out the tech center over the last seven years. “This ensures that when we go to sell the tires, we are capable of competing from a financial and marketing standpoint. We have to understand the space we work in. The only way to do that is to make sure you understand and tested competitors as well.”

Another section of the center houses Kenda’s compounding lab, which acts as a small version of a mixing facility and tire factory. An array of rubbers, polymers and raw materials are at chemists’ fingertips to mix different materials together to create new compounds– or improve on existing ones– and test for different performance characteristics.

“We continue to focus on giving the customer value, honesty and innovation,” Yang said. “It is adherence to these core values and our people that will help us move forward for another 60 years.”

Currently, Kenda employs 46 at its North American Tech Center but has the capacity for 80, which lends itself to future growth. Williams said while Kenda has built its tech center over the past seven years, in the near future, the company intends to focus on R&D and refining the products in its tires.

“We have a center as good as anybody in Akron,” says Williams. “We have the capabilities as good as anyone in Akron at a much smaller scale. We have the tools that meet the performance of leading products.”