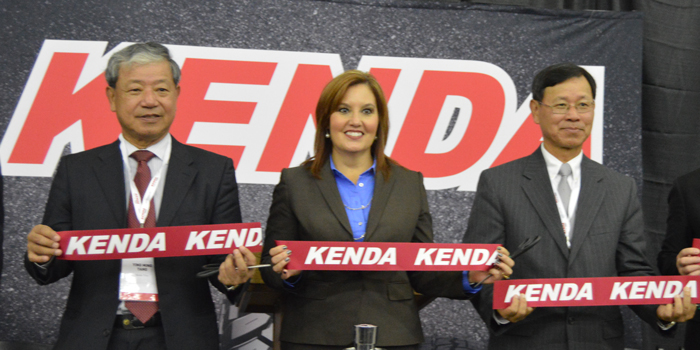 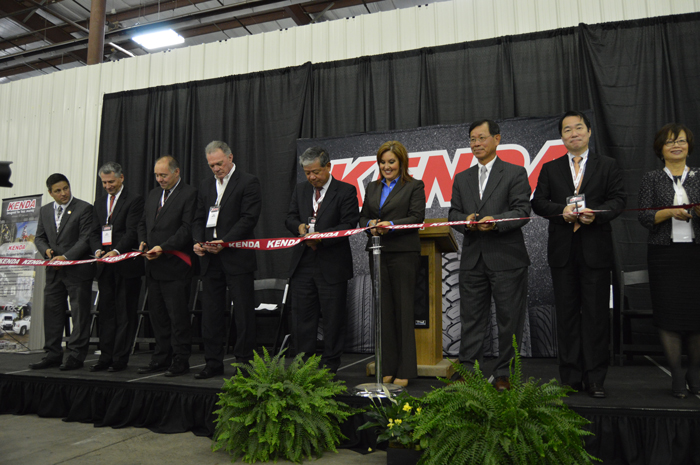 Back to the Rubber City

“We feel that Akron is a good town of operation and historically Akron has been the center of our tire business and tire industry,” said Ying-Ming Yang, chairman of Kenda Rubber Ind. Co., Ltd.

The new 50,000-square-foot facility was purchased and supported in part with the help of a 10-year grant from Ohio and 7-year income tax incentive from the city of Green. The new facility will be used for research and development efforts such as new products and technology, and will hold engineering offices, said Tom Williams, Kenda USA’s vice president of engineering.

Williams spearheaded the purchase of the new building, which is the tiremaker’s first technical center in the U.S. – centers are also located in Yuanlin, Taiwan, and Kunshan, China. 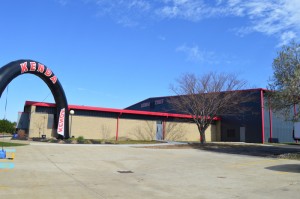 The Kenda American Technical Center is located in Green, Ohio, and in close proximity to the Akron-Canton Airport and not far from Kenda’s Martin Wheel Co. in Tallmadge.

“We are working on introducing new technology throughout the facilities both here and Taiwan and China into the development process to speed things up and also (offer) a better quality product for the company,” Williams said. “This is also being put into place to help us become a very competitive OE supplier for the automotive industry in the United States. Obviously that is a very tough market and it requires good technology to handle it.”

After purchasing the former Morris Office Environments building, Williams said in 19 months the building has been renovated, and 18 people have been hired. Approximately $400,000 has been spent on improvements. Kenda plans to hire a total of 60-70 people by the time the facility is completed.

Tire Review reported earlier this year that Kenda plans to bring an approximate annual payroll of $4 million to Green.

Spring 2016 is the expected completion date of Phase 1 for the technical center’s laboratories, which will include compound analysis, chemical and machinery laboratories and a tire dissection lab, footprint pressure measurement, an environmental chamber for temperature testing, and ride and handling support.

Later phases are to be completed in the next three to five years and include a tire analysis lab, flat plank footprint and force and moment testing, air permeation testing, a vibration/modal lab and test tire warehousing.

“We are very successful in the spare tire OE business and we would like to grow that business…And the opportunity is right there because we have done such a good job with spare tires and some OE had known the Kenda tires and also the quality of the Kenda service,” said Jimmy Yang, president of Kenda USA. “With the tech center in Green it just adds so much more interest for us. We are also expanding our OE presence in Asia – in China, in Taiwan – and in Iran, but eventually we want to approach the OE in Europe so the next step is to have a tech center in Europe.”

President Yang anticipates Kenda will outgrow the building in about five years and may need 100 to 200 employees by then. He adds that he would like to keep the center in Green or in an area like Hudson, Ohio.

Chairman Yang notes that of Kenda’s $1.1 billion in sales, 21% is from U.S., making North America a very important market for Kenda and a ideal location to build a technical center.

“We choose America as our first priority because as I mentioned earlier, the USA is our No. 2 market – No. 1 is the Chinese market – for Kenda,” Chairman Yang said.

Kenda currently has six tire factories with three in China, two in Taiwan and one Vitenam and is adding a tire factory in Indonesia and adding a second factory in Vietnam. Kenda USA operates out of Columbus, Ohio.