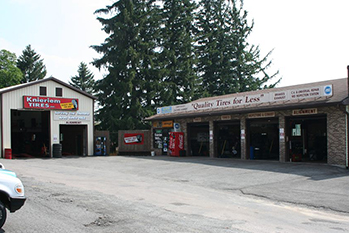 Knieriem Tires Inc. sits directly across the street from where Jamie Knieriem grew up. “That’s how I leaned how to spell my last name,” says Jamie, who runs the shop alongside her father, Jeff. “I would sit in the window and look across the road at the sign.”

Sometimes she would sit at the window and wait for her father to get home after a long day of work. Other times she was able to tag along, learning the ins and outs of the family tire business. 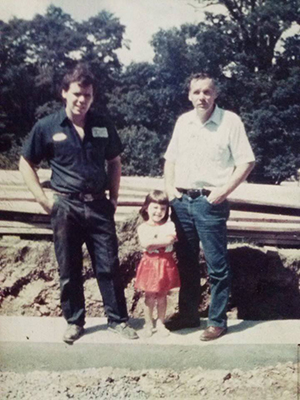 “Once I got to a certain age, I always knew this is where I would be,” she says. “It’s been handed down and hopefully it goes to me one day.”

Jamie’s grandfather, Ralph “Pap” Knieriem started the tire dealership in 1968. “He worked for Kelly-Springfield in Cumberland during the day, making tires, and in the evenings he would come here and open up the shop and help customers,” she says. “That’s when everything was pretty much done by hand.”

Today, seven employees, including Jamie and Jeff, work at the four-bay tire and automotive repair shop in the small town of Midlothian, Maryland, just outside Frostburg, near the Pennsylvania line, and west of Cumberland along Route 40.

While Pap is now retired, Jamie says he comes by the shop often and still changes his own oil.

At Knieriem Tire, Jamie says the work is steady.

She takes tire shipments around noon.

“We don’t stock a whole lot,” she says. “My distributors deliver every day. If I stock, it’s really common sizes, and maybe two or four of each. We carry pretty much everything.”

Jamie works the front desk, answering calls, making appointments, checking out customers and handling all the bills and paperwork.

“I know a lot more about tires than I ever thought I would, and I learn something new every day,” she says. “I give second opinions, and I’ll test drive cars every once in a while.”

She says they work on a mix of vehicles in the working-class town.

“We see a lot of people putting older cars on the road,” she says. “We do Maryland state inspections so we’ll do what’s required to get it through inspections. We put tires on pretty much everything, Mercedes, VWs, BMWs.”

She says having the right equipment is essential to get work done.

“When it comes to equipment, my dad always says ‘bigger is always better,’” she says. “In November we bought the new Snap-On diagnostic scanner. It was expensive, but we do it because we have to. We do our best to have the right equipment to work on the vehicles for any model or any year.”

They also try to make the most out of what they have. Earlier this year, she says her father completely restored an alignment rack.

“We have a one-ton alignment rack that needed some serious maintenance. Jeff sandblasted it himself and painted it. It was a seven-week job that we just got done.”

When it comes to advertising, Jamie says its mostly word-of-mouth and a good Web presence.

“We did direct mail a few years ago. At first it was great, but as years went on, people just kind of don’t look at it anymore because they think its junk,” she says. “The newspaper used to be great. People would walk in with our ad in their hand, but they just don’t do that anymore.”

The company has a website and has a Facebook page which is updated regularly. “I try to get on and post once a day,” she says.
They also advertise in the Frostburg State University directory and they have a good mix of new and returning customers.

“We have customers that have been coming here since I was 5 years old,” she says. “They say ‘I remember you when you were wee little.’ And I still get customers who are new.”

She says they get customers from surrounding areas, including those who will drive in from Pennsylvania or West Virginia.

“Some people come from pretty far away so it doesn’t benefit them to go home and come back,” she says. “They’ll sit here for a few hours and get their work done. I have a farmer who gets his nap in when he gets his vehicles worked on.”

Jamie says there’s a mix of competition around town, but when it comes to price and service, she’s confident that Knieriem Tire is the best in town.

“Our tire prices are the lowest in the area, from what I hear,” she says. “And we have great service. People come to us when they want something done right and they come to us so they don’t have any further worries down the road.”

She says they take an honest app-roach to all of the work they do, and try to get people back on the road with as little hassle as possible. “We just try to take care of our customers like we would like to be treated,” she says.

When it comes to helping the community, the Knieriems do what they can to support their neighbors.

“We’ve donated tires to the Frostburg Museum and to the high school football team,” Jamie says. “We’ve sponsored cars at the fairgrounds.”

In the winter, Jamie says her dad fires up his Kabota tractor and Ford F-350 with a plow to help clear snow from county roads and neighborhood driveways.

“My Dad has always worked hard from a young age, for his employees, customers, and most of all, for his family,” she says. “He always does his best and he strives to do his best every day. We all do.”