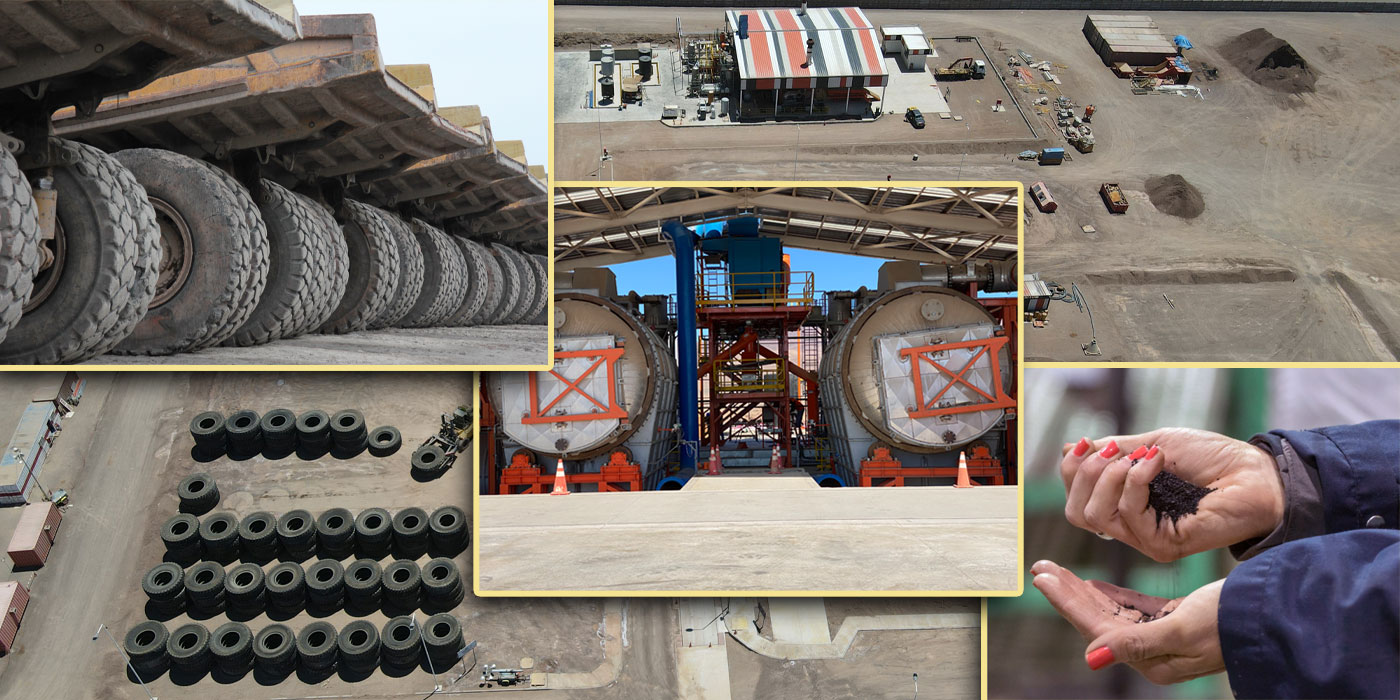 One of the biggest challenges in the OTR industry is dealing with scrap tires. Scott Farnham, director of recycling services for Kal Tire, knows this well: He’s seen mining sites with tires stacked four high as far as your eyes can see. And these tires, most often left to rot in the sun, weigh 2,000 to 14,000 pounds and can stretch as much as 14 feet tall. It’s better than what happened in the past–when mining tires were buried underground. Yet in the heart of mining country in Chile, Kal Tire has found a potential solution to this problem that has gripped the mining and OTR tire industry for decades.

“There’s not really been technology up until now to take care of this,” Farnham says. “We wanted to be the company to have the solution for this problem.”

Last spring, Kal Tire opened its thermal conversation tire recycling plant in Northern Chile, which has the potential to recycle 14 million pounds (7,500 tons) of used mining tires per year and turn scrap tires back into their original components of oil, steel and carbon black. More than that, it has serious implications for scrap tire recycling in the future and has the ability to create a circular economy for OTR tires and reduce the carbon footprint of all parties involved.

“If we could start giving something back to the mines that come from their scrap material, that is a true circular economy,” Farnham says. “That’s a huge step for the industry.”

Kal Tire receives a truckload of four mining tires from a site. (Full disclosure: Mining sites pay Kal Tire to get rid of their used tires.) Then, each tire goes through a “chain of custody”–records that detail the tire’s serial number, the mining site it came from, how much it weighs, the date it’s slated to get recycled and so on.

“That way we can tell customers we put your tire in the reactor on this day and it turned into this,” Farnham says, noting that the Chilean government also mandates tire importers have an end-of-life solution for the tires they bring into the country. “We want to make sure that we’re totally aligned with the government and the client’s environmental guidelines.”

Then, tires are washed, cut into three-foot-long pieces and loaded into one of the plant’s two thermal reactors. A full load can handle the equivalent of five 63-in. OTR tires at one time. Over 24 hours, thermal conversion decomposes the tire with heat and the absence of oxygen (in a process known as pyrolysis), converting tires back into their original components: fuel oil, carbon black and steel.

“When the tires decompose, they give off a synthetic gas, which we capture after about six hours,” Farnham says. “ It gives off enough gas that we can turn off all external fuel [powering the process]. From there, the process runs on the gas that the tires give off. So, it’s self-fueling and there’s no external energy–that’s why we picked this technology because there’s no combustion or burning. It’s a very environmentally friendly process.”

“We’re really excited about what this solution means for mining in Chile and across the mining industry,” she said.

Farnham added: “We might be one of the first but we’re blazing a trail and we’re happy that the industry is interested in doing the same thing.”

So, Kal Tire generates tons of raw materials from this process, so what do they plan to do with them? Perhaps sell the raw materials back to tire manufacturers to create new tires and tire components–the literal definition of a circular economy. Or, maybe give the components to local companies to manufacture products that will serve the local economy. Well, a little bit of everything right now, Farnham says.

Kal Tire is working with a few Chilean companies that manufacture rubber and plastic goods to refine its product to fit their needs. Testing is being done to ensure Kal Tire’s recycled materials can withstand certain applications. The recycled oil is being sold to local offtake companies to use for energy, instead of burning fossil fuels, which means a reduction for their carbon footprint.

“We’re at the contractual stage now with some of these companies…and some of the materials look like they will come back to Kal Tire in our retreading materials, too,” he says.

Farnham says Kal Tires goal is to reduce the carbon footprint for Kal Tire and their customers and find cost savings down the line. With an assurance that this can be achieved, the company will look to extend this technology in other parts of the world in which they operate.

“Every company is looking for that and that’s just becoming a bigger part of doing business today,” Farnham says. “I think to be part of the supply chain, you know you’re going to have to show you’re making great efforts to try to reduce your carbon footprint. Birds of a feather will stick together, and companies today want to be associated with clean and green companies. That’s really our goal.”

Apollo, Tyromer Partner to use Recycled Tire Material
Connect with us