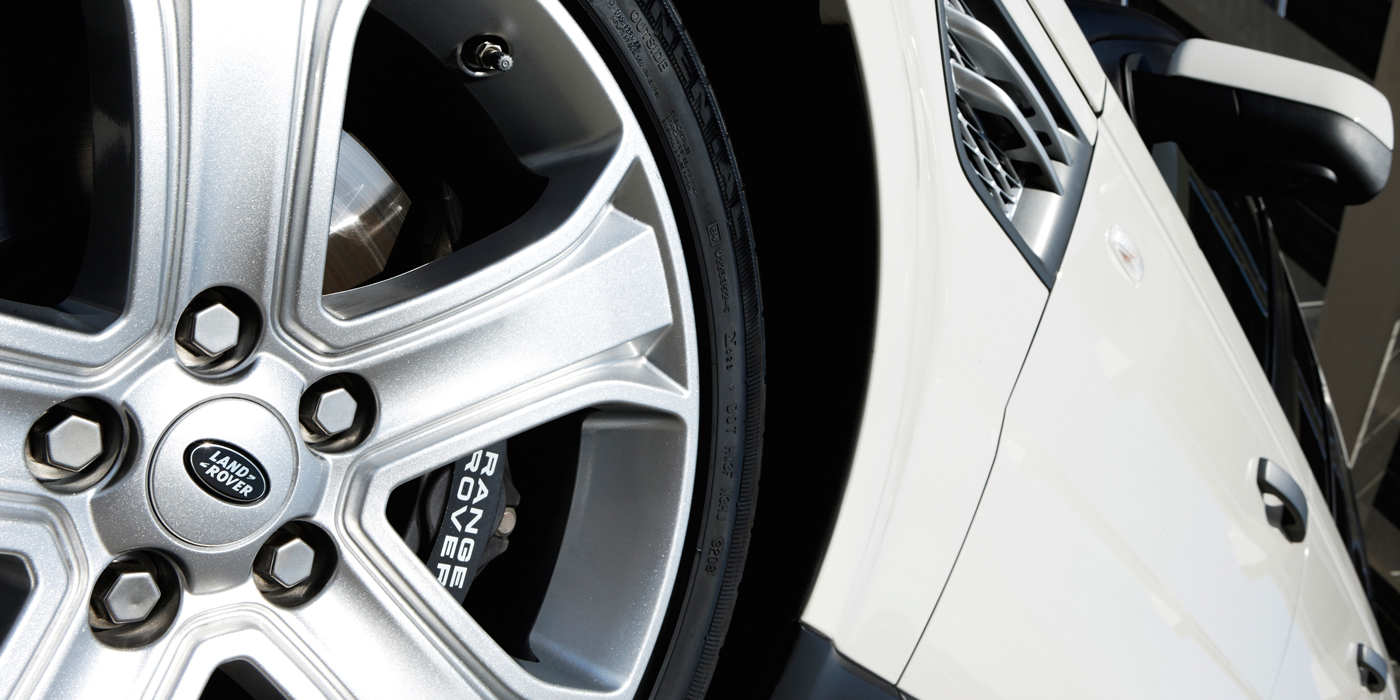 In the new system for Jaguar and Land Rover, signal initiators are located in all four wheel wells, and they send a 125 MHz signal to force the sensor in the wheel assembly to transmit. The signal from the sensor is received by an RF receiver that can be mounted in the overhead console or near the shifter.

With the old system, it reset and learned sensor IDs in 10 minutes if the vehicle drove above 20 mph. The new system will reset and relearn a sensor in 15-18 minutes driving above 15-18 mph, but typically takes only seven to eight minutes. Jaguar and Land Rover’s new system also has enhanced signal initiators and antennas.

In the new system, signal initiators are located in all four wheel wells, and they send a 125 MHz signal to force the sensor in the wheel assembly to transmit. The signal from the sensor is received by an RF receiver that can be mounted in the overhead console or near the shifter.

The system is controlled by a tire pressure sensing module that can be mounted under the passenger seat or in the center console. It can also be integrated into the Central Junction Box (CJB) on some Land Rovers.

The module will control a specific initiator to transmit a signal that is received by the sensor. Then, the sensor in the tire will transmit its ID, pressure, temperature and other information at 315 MHz or 433 MHz. By initiating one sensor at a time, the receiver knows the position on the vehicle. Jaguar and Land Rover call this Auto-Location.

Temporary spare wheels are not fitted with tire pressure sensors. Some Land Rovers with a full-sized spare will have a sensor but not an initiator. When the spare is fitted, the TPMS system will indicate a fault on the dash.

This setup can experience problems under some conditions. Low-frequency radio waves between 125 MHz and 433 MHz are rather noisy with possible interference from things like phone chargers and garage door openers. Depending on the strength and location of the interference, TPMS sensor and initiator signals can be garbled. This is why the OEMs recommend a relearn/reset procedure that needs to be performed at a specific speed range for a set amount of time. The sensor and receiver have to complete several transmissions where the sensor’s ID matches. This eliminates the chance of a sensor ID being saved from a vehicle close by or the reset process from being aborted prematurely.

The Auto-Location function requires the vehicle to be driven at 16 mph or more for 15 minutes. The procedure is usually completed in seven minutes. If the system detects a deflation, the instrument cluster will display the tire pressure warning indicator, and an appropriate message will be displayed in the message center. The initiators will then cause the sensors to transmit at set intervals, typically every 60 seconds.

Each time the vehicle is driven, the TPMS module activates each antenna. The corresponding tire low- pressure sensor detects the signal and responds by modifying the mode status within the transmission.

As each wheel responds to the signal from the TPMS module, it is assigned a position on the vehicle and is monitored for the remainder of that drive cycle in that position.

The TPMS system enters “Parking Mode” when the vehicle speed has been less than 16 mph for 15 minutes. In this mode, the tire low-pressure sensors transmit a coded signal to the tire pressure monitoring system module once every 13 hours. If there is a decrease of 1 psi or more in the tire pressure, the sensors will transmit more often as pressure is lost.

When the vehicle speed increases to 16 mph or more, the TPMS enters “Driving Mode.” In this mode, the tire pressure sensors will measure the pressure and temperature of each tire every 15 seconds once, then once every 60 seconds. If a change in tire pressure is sensed, the sensors will transmit more often. Pressure and temperature measurements are transmitted periodically to the receiver on the vehicle. To conserve battery power, the sensor transmits at different rates when the wheel is stationary or moving.

You might be thinking that Jaguar and Land Rover systems don’t really need that much attention around diagnostics. But, when you get a vehicle in your shop that has the TPMS light on and won’t go out, diagnostic procedures and tools can save a lot of time.

The philosophy of “Test Before You Touch” applies to these systems. Before you start replacing sensors, use a TPMS tool to collect information directly from the sensors. The tool will mimic the 125MHz “poke” so that the sensor is forced to transmit. Some tools can even retrieve codes to confirm operation of the module, initiators and antenna.

Advertisement
In this article:TPMS Service